Majority of COVID-19 loans not used for pandemic response 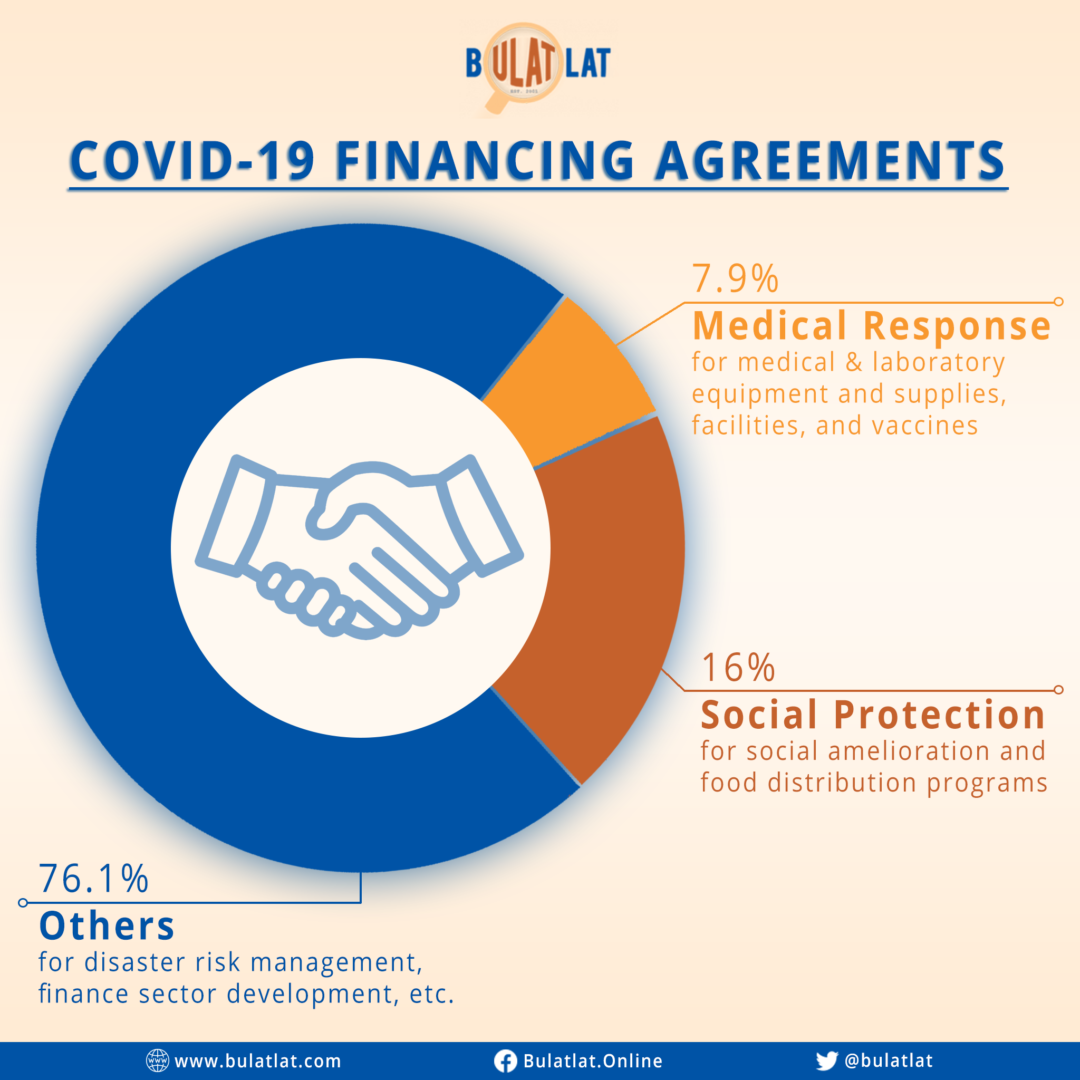 Aside from the fact that the biggest chunk was not used specifically for the COVID-19 response, it is the taxpayers who will suffer the most in paying off these debts.

MANILA — It has been more than a year since the country was plagued by the COVID-19 pandemic, and placed under drastic lockdown measures to minimize the spread of the virus. One would think one year is enough for the government to respond to the needs of the nation, but it seems like the country is back to square one with the number of cases at an all-time high.

Certainly, the administration gathered enough loans to fund its pandemic response, but what really has been done to address the health issue?

In an online interview, IBON Foundation Executive director Jose Enrique Africa said that it is not wrong to borrow money if it is a necessity. “Right now, the country needs the loans. Especially since our economy plummeted and there has been a decrease in economic activity. It is a legitimate question to ask, where will we get funding for the response?” he told Bulatlat.

To date, the government acquired 27 loans, worth more than P700 billion (US$15 billion), to aid in its response against COVID-19. However, our research showed that only around P60 billion (US$1.2 billion), or a measly nine percent, was intended for projects which were made to address the health crisis in the country.

The Department of Finance (DoF) categorized the financing agreements into two, budgetary support financing and project loan financing. Africa explained that both types are dedicated to be used for the pandemic response and aid the government in addressing the health crisis. The main difference being, project loans go to a specific program and that program only while the beneficiary for budget support is entirely upon the discretion of the borrower – in this case, the government.

One look at these loan agreements would give an impression that nothing was out of place, but the fine print tells a different story.

More than P100 billion pesos (US$2.2 billion) was dedicated to social protection projects. While the fund helped in providing cash subsidies to impoverished families, mainly those included in the Pantawid Pamilyang Pilipino Program (4Ps) of the Department of Social Welfare and Development (DSWD), it is a government project that has been in existence even before the onset of the pandemic.

Africa stated that even if the loan was put under the COVID-19 response, in reality it is an existing program. While the money will undoubtedly go to the poor, it can not be considered part of the government’s efforts to address the pandemic.

Moreover, a third of the loans went to infrastructure. Almost P268 billion (US$5.3 billion) was used to mitigate the severe economic shocks caused by the pandemic, to strengthen domestic capital markets, and to develop the finance sector.

The amount of money spent on these projects was glaringly huge compared to the minuscule P55 billion (US$1.1 billion) the government set aside to procure medical equipment and supplies, to upgrade laboratories and isolation facilities, as well as to distribute COVID-19 vaccines.

Aside from the fact that the biggest chunk was not used specifically for the COVID-19 response, it is the taxpayers who will suffer the most in paying off these debts.

By the end of its term, IBON estimates that the Duterte administration would have borrowed P11.22 trillion (US$226 billion) over 2017-2022, an amount equivalent to the gross borrowings in the entire post-Marcos period 1986-2016.

Africa mentioned that while the DOF has been lowering the taxes of the rich and large companies, the agency is proposing taxes to be shouldered by the poor.

“If they are reducing the amount of money they get from these rich families, where will they get the money to pay off these loans? Through TRAIN Law, consumption taxes, etc.,” he added.

Since the DOF started to publish a copy of the financial agreements on their website, the government agency has not been consistent in keeping its records transparent to the public.

There have been instances where previously published loan contracts were removed from their list or placed in a different category.

There is also no data available describing how these funds were spent and how much of it was utilized for its intended purpose.

Africa said they have sent several requests for information to different government agencies but to no avail.