Who is Joseph Canlas and why is he trending on Twitter? 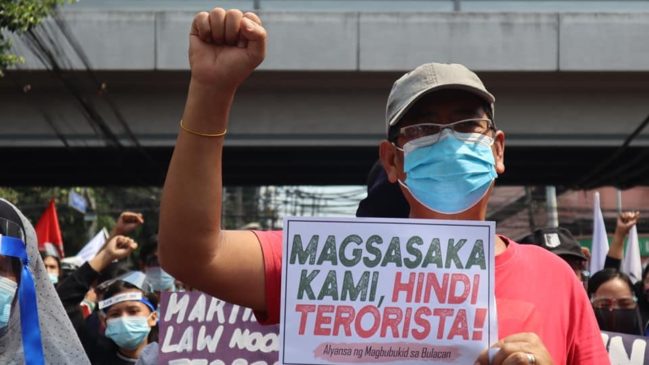 MANILA — Joseph Canlas is a peasant leader and community organizer based in Central Luzon, where he led various campaigns and struggles against landgrabbing and land-use conversion in many farming communities in the region. Early morning today, March 30, he was arrested in Sapang Maisac, Mexico, Pampanga.

In a separate incident, another worker-activist Pol Viuya was arrested in Bamban, Tarlac around the same time. Both of them have been constantly red-tagged, with their names and photos appearing in tarpaulins where they were referred to as so-called “fronts” of the New People’s Army.

This, too, came after a series of killings and arrests in Southern Tagalog, the latest was Dandy Miguel, who was shot dead yesterday in Laguna.

PAMALAKAYA calls for release of Joseph Canlas, a Central Luzon-based peasant leader nabbed on undoubtedly fabricated charges by the PNP-CIDG in Pampanga early this morning.

Canlas champions the rights of fishers in the region and upholds sovereignty in the West Philippine Sea. pic.twitter.com/eMtgyYOKxw

Canlas is the current Vice President of Anakpawis, championing rights and welfare of peasants in Central Luzon. pic.twitter.com/d8wA8d09jS

Today, they arrested Joseph Canlas, a tireless peasant leader, community organizer & human rights worker. He is all these things to many people. To me, he was a wonderful teacher who patiently answered all our questions as doe-eyed kids spending their practicum in Pampanga. pic.twitter.com/PljUDihGMU

Duterte’s demented war against farmers fighting for land reform rages on. Prior to his arrest by the PNP, @kmp_phl vice chair Joseph Canlas has been a leader of Central Luzon farmers in their struggle against land grabbing & land use conversion. #StopTheAttacks #EndImpunity pic.twitter.com/sNqoSQbjeZ

The same morning, Pol Viuya, the Chairperson of BAYAN Central Luzon, was arrested on basis of arrest warrant and planted evidence.

Canlas is a regular news source among many journalists covering issues on agrarian disputes, particularly that of the Hacienda Luisita. In 2013, the peasant leader was among the 11 arrested in Hacienda Luisita while they were conducting a fact-finding mission.