You Are Here: Home → 2021 → April → 2 → Wife of peasant leader in Central Luzon recalls threats before his arrest 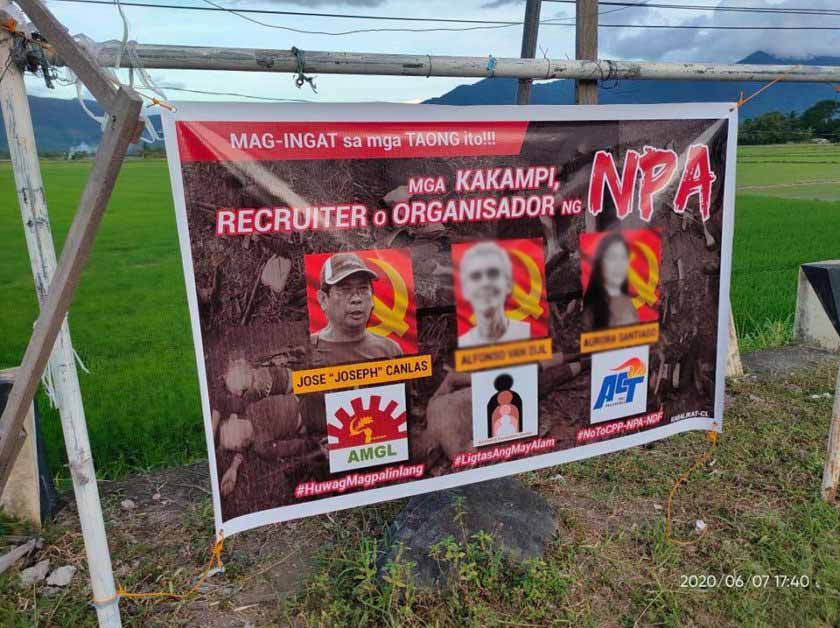 Streamers red-tagging Joseph Canlas and other activist leaders in Central Luzon were seen hanging along the streets Barangay Cristo Rey in the town of Capas, Tarlac on May 8, in Angeles, Pampanga on May 23, in the municipalities of Guiguinto and Pandi in Bulacan on May 30, and in Baler, Aurora and Sta. Cruz, Zambales on June 7 and 8, 2020. (Based on a fact sheet provided by Karapatan-Central Luzon)
[/caption]Apart from the red-tagging of Joseph Canlas on social media, threats were felt by members of his family in their own homes.

MANILA — The wife of Joseph Canlas, one of the activist leaders arrested on the morning of March 30 in simultaneous raids in Central Luzon, couldn’t remember when she last saw her husband of 34 years.

In a phone interview with Bulatlat, 54-year old Mercelina said her husband was supposed to come home a few weeks ago but had to back off the last minute when he sensed someone was tailing him. That has been the case since the lockdown was imposed last year, she said. It was also around this time that social media posts on several Facebook Pages like the Samahang Kontra Makakaliwa and Wanted Kapayapaan – Inner Peace started red-tagging Joseph and other activist leaders in Central Luzon and other regions. There were also several tarpaulins bearing the face of Joseph and other activists in Central Luzon which claimed that they were recruiters of the New People’s Army, the armed wing of the Communist Party of the Philippines.

It is even worse in their ancestral home in the town of Arayat, also in the province of Pampanga, Mercelina added. In several instances, she said her siblings would call her to caution against going home because unfamiliar vehicles would park in front of their ancestral home without anyone alighting from the vehicles for hours. Several unidentified men would also frequent the same house asking for Joseph’s whereabouts.

“He [Joseph] would just call to ask how we are coping, he would ask about our grandchildren,” Mercelina recalled.

Mercelina said she would sometimes ask her husband if there were other threats to his life while he is away from home but Joseph can only shrug it off. “It is better that you do not know anything to avoid being frightened,” she recalled him telling her.

“But we know their situation and we cannot help but be frightened, especially now,” she told Bulatlat in Filipino.

It was around noon last Monday, March 29, when Marcelina last heard from her husband. The next thing she knew, her husband was already in jail.

Police operatives and army intelligence units led by the Criminal Investigation and Detection Group -Regional Field Unit 3, arrested Joseph inside the AMGL office past six in the morning, March 30, 2021. They were armed with two warrants of arrest, the first was issued by Angelica T. Paras-Quiambao, Executive Judge, RTC, Angeles City for illegal possession of firearms and ammunition, and the second was issued by Hon. Theodorick K. Ayungco, Presiding Judges, MCTC, Nampicuan, Nueva Ecija for malicious mischief.

“It’s absurd. With my age, I haven’t seen him hold any kind of gun,” Mercelina said about the warrants.

Mercelina sounded optimistic when she said counter charges will be filed by Joseph’s lawyer on Monday right after the Holy Week. Her voice started to break, however, when asked what was her appeal to the government. “Freedom for Joseph and other political detainees who stand with and help poor people like us,” she uttered.