For low-wage earners, staying at home is a luxury they cannot afford 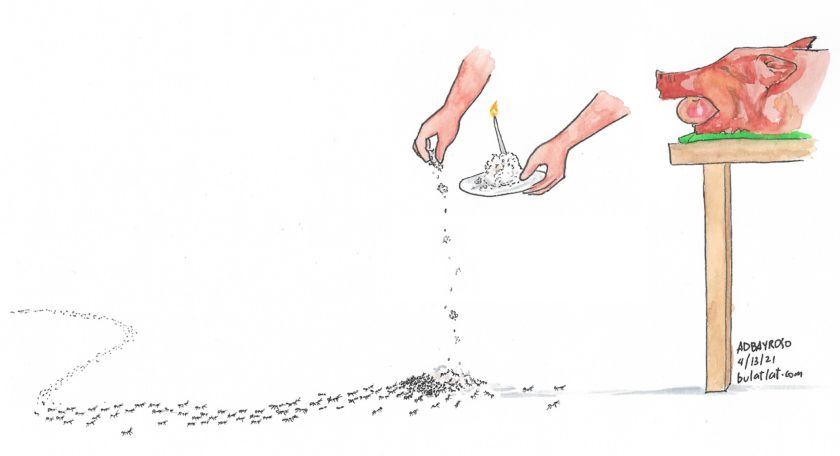 MANILA – A street sweeper in Marikina, Mechelle Radolla could not believe it when she tested positive for COVID-19. This despite all her precautions such as wearing face mask and face shield, and observing physical distancing.

“My work compels me to be outside, and it is the same for others who are out there working or looking for one. If we can afford to stay at home, we would for sure,” Radolla told Bulatlat in a phone interview.

Last month, she and 15 other colleagues who are considered government frontliners tested positive to the dreaded virus. Her husband and three children aged 16, 11, and six were put in home quarantine, while Radolla was brought to the village’s isolation facility. If there is any consolation, it would be that she was asymptomatic and her family did not show any symptoms too.

The day after she stepped out of her 14-day isolation, 39-year-old Radolla returned to work without fanfare. It was the only work she had come to know. Her husband, who was in quarantine for two weeks, lost his daily income.

Radolla belongs to the “productive age group” of 20 to 49 or those in the workforce afflicted by the virus. The health department recently said that not only are cases in this age group increasing, but they are also experiencing more severe symptoms.

Since July last year, a study of the University of the Philippines Population Institute and the Demographic Research and Development Foundation noted, “Over time and as the number of cases increased, the distribution across age groups has shifted, skewing towards the younger population.”

Providing due social protection would have contributed to keeping people from leaving their homes but urban poor group Kadamay said the government’s financial aid has been “slow and too little.” They noted that the $20-aid per individual is a far cry from the $206 that progressive groups are demanding.

Radolla said she digs her own shallow pocket to buy face masks, shields, and alcohol. Whenever her budget is tight, she would opt for cloth masks that she can wash and reuse.

Another Marikina-based worker, Maria Luisa Fabella, said she also shoulders the costs of most of their protective gear and the increased transportation cost. This is aggravated by the lesser salary she has been receiving as her company of 22 years only employs a skeletal workforce of about 40 percent.

Before the pandemic, Fabella earns a weekly salary of $78. But due to loans and other deductions, she only takes home about $31 or even lower. Now that workdays have been reduced to two or three a week, she receives a measly weekly pay of at least $10, not enough for the needs of her family of five.

In its 2020 report, the International Labor Organization said a total of 10.9 million Filipino workers, 38 percent of them women, stood to either have lesser income or lose their jobs completely. The ILO also recommended that income and in-kind allowance, along with social protection measures, should be provided to build a “better normal.”

Fabella, however, said, she received no financial aid from the government.

Other forms of assistance, such as transport services that could have provided them easier and safer means of reporting to work, were not provided to them by their company. When the lockdown was first imposed last year, she would walk to and from her work for over an hour. Tricycles were later allowed to ply the roads of the Philippine capital but fares rose from $0.83 to $1.45 per trip.

President Duterte approved the release of a P22.9 billion financial aid for 22.9 million low-income residents of the National Capital Region, and the neighboring provinces of Bulacan, Rizal, Laguna and Cavite. Beneficiaries were set to receive P1,000 each to a maximum of P4,000 per family.

On April 17, however, the government news PNA reported that only 4.47 billion aid has been distributed, which is equivalent to about 40 percent of the allocated funds for the financial aid.

Fabella said they are able to maintain physical distancing while at work, where she operates a big machine that puts thread on spools. Interaction between workers though do happen during their breaks or over meals.

As of now, their company has 10 active cases among its workers. Fabella said that per their contact tracing, they did not contract the virus while at work, because CCTV footage revealed that there was no direct interaction between them. They instead suspected that their co-workers contracted the virus at home as their other family members also tested positive.

Meanwhile, those who interacted with COVID-positive workers were not allowed to go to work for 14 days, which also meant no income for them.

“People are worried that if they test positive and are required to isolate, they will not be able to work and their families might go hungry. Delikado ito (This is dangerous),” she said in a tweet after her office began a mobile swab test.

To convince people to get tested, Robredo suggested that they be provided with cash assistance equivalent to at least the minimum wage for every day that they are not able to work because they are in isolation. She noted that her office does not have the resources to do this.

Progressive lawmakers are pushing for a 14-day pandemic leave, which will benefit workers who are compelled to work because of “no work, no pay schemes.” The House Bill No. 7907 or the Paid Pandemic Leave Law of 2020, however, is neither certified urgent nor signed into law.

While workers continue to wait for much-needed social protection, Fabella said she must continue to work to earn a living for her family. Every time she takes a jeepney to work, she would say a little prayer – hoping not to contract the virus and bring it home to the rest of her family.