MANILA — Filipino netizens are up in arms over what appeared to be harassment as police officers were seen roaming near community pantries, a growing mutual aid movement in the country as many experience hunger and subjected to poor social protection amid the pandemic.

In a now-deleted Facebook post, one of the organizers of the community pantry in Pandacan shared that two police officers approached their community pantry, asked them to answer a profiling sheet, and took a photo of them. 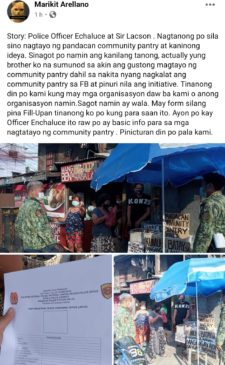 Faith-based humanitarian worker Patis Mungcal, in a tweet, said two cops also visited their community pantry, pointing out that they should quickly replenish their supplies for everyone in the queue and abide by health protocols.

In a statement, urban poor group Kadamay said police presence is “definitely not needed” in the community pantries, adding that their atrocious record will scare away people who badly need food.

“The fear of being jailed and harassed is a legitimate one,” Kadamay Secretary General Mimi Doringo said.

On Labor Day last year, 10 relief workers providing warm meals in Marikina were arrested. Also last year, a former lawmaker and several peasant activists were also arrested while on their way to provide much-needed relief goods to Bulacan farmers who lost their livelihoods due to the lockdown.

Community pantries are being set up in many parts of the country, as part of a mutual aid initiative among the poor. The movement adopted the phrase, “magbigay ayon sa kakayahan, kumuha batay sa pangangailangan” as their rallying call.