Bulatlat Contributors April 28, 2021 lorraine badoy, NTF-ELCAC, pork barrel
Little did the NTF-ELCAC spokesperson know that her challenge to Non would backfire quicker than her red-tagging spurts on social media. The task force immediately became the center of scrutiny, as its P19.1-billion programmed allocation in the 2021 budget starkly contrasts the image of hungry Filipinos lining up at community pantries.

With unparalleled audacity, the spokesperson of the government’s red-tagging task force has dared Maginhawa community pantry organizer AP Non to provide a “clear accounting” of the donations pouring in for the initiative to feed the poor. But has the inter-agency task force made its own accounting of its P19-billion (US$395 million) budget for this year?

“To those good hearts who have donated their dollars to AP Non, please ask for a clear accounting. Ask where your money went. Make sure it goes to where you want it to go,” National Task Force to End Local Communist Armed Conflict (NTF-ELCAC) Spokesperson Lorraine Badoy wrote in a Facebook post.

Little did the NTF-ELCAC spokesperson know that her challenge to Non would backfire quicker than her red-tagging spurts on social media. The task force immediately became the center of scrutiny, as its P19.1-billion programmed allocation in the 2021 budget starkly contrasts the image of hungry Filipinos lining up at community pantries.

Of the P19.1 billion (US$395 million), P2.6 billion ($53.8 million) is scattered across several agencies for the NTF-ELCAC’s operational expenses, including the P1.084 billion ($22.4 million) tucked under the Department of Interior and Local Government’s (DILG) budget. These agency funds for NTF-ELCAC have no itemized breakdown in the 2021 GAA.

Aside from enjoying in-agency appropriations, the NTF-ELCAC wields control over P16.44 billion ($340.8 million) in the form of Special Purpose Fund (SPF) under the Local Government Support Fund – Support to Barangay Development Program (LGSF-SBDP).

Under the program, the NTF-ELCAC seeks to hand out up to P20 million ($413,840) each to 822 barangays cleared of communist insurgency for the implementation of a menu of projects which mirror existing ones in national government agencies. Being a cash dispenser a year into the polls certainly would make it a more vicious red-tagging arm especially against known opposition figures of the Duterte administration.

The redundant list of projects includes farm-to-market roads, water and sanitation system, housing, COVID-19 vaccination, livelihood projects, among others. For one, around P10 billion ($207 million) is already allocated for farm-to-market (FMR) roads under the Department of Agriculture’s budget.

The NTF-ELCAC brandishes these piecemeal projects as solutions to the armed conflict. But the long history of armed revolution in the country is rooted in much deeper problems of landlessness and socio-economic injustice – problems which are accentuated by the current economic recession and pandemic.

While the FY 2021 General Appropriations Act contains an annex for the LGSF-SBDP, the document only lists the 822 barangays and their respective P20 million allocations without the specific types of projects per village.

In their defense of the P16.44-billion Barangay Development Program (BDP), the NTF-ELCAC said during the budget deliberations that the funds will not pass through them.

However, it cannot be denied that they are the ones who exercised discretion in identifying the barangays. They have ELCAC formations, too, at the regional and provincial levels up to the barangays which certainly can influence how the funds would be spent.

DBM Local Circular No. 135 would also make it clear that the P16.44 billion ($340.8 million) constitutes what the Makabayan bloc calls “Generals’ Pork.” Based on the circular, LGSF-SBDP funds “shall be released to the Provincial Governments where the identified barangays are situated.”

But here’s the intriguing twist: “In case when the Provincial Government is technically incapable to implement the projects identified by the cleared barangays, the project may be undertaken by an appropriate national government agency, including, but not limited to, the AFP Engineering Brigade,” the circular reads.

The intention was explicit – that the AFP Engineer Brigade shall be made implementers of the projects in case the LGUs are not technically capable to pursue the projects. Here, we see the brazen attempt to channel public funds into the domain of the AFP, as if their hefty bonuses, incentives, and discretionary funds to buy war machines under the AFP Modernization Program are not enough.

We should then ask: How many of the projects under the LGSF-SBDP will be implemented by the AFP Engineering Brigade?

Despite the standing questions and lack of publicly available project details, the NTF-ELCAC, through the Bureau of Treasury, has already obligated half of its P19.1-billion budget.

Data from the DBM website reveals that Special Allotment Release Orders (SAROs) worth P9.67 billion ($199.88 million) has been approved and released from March 24, 2021 to April 23, 2021 for the implementation of priority projects of recipient LGUs under the LGSF-SBDP of the NTF-ELCAC. 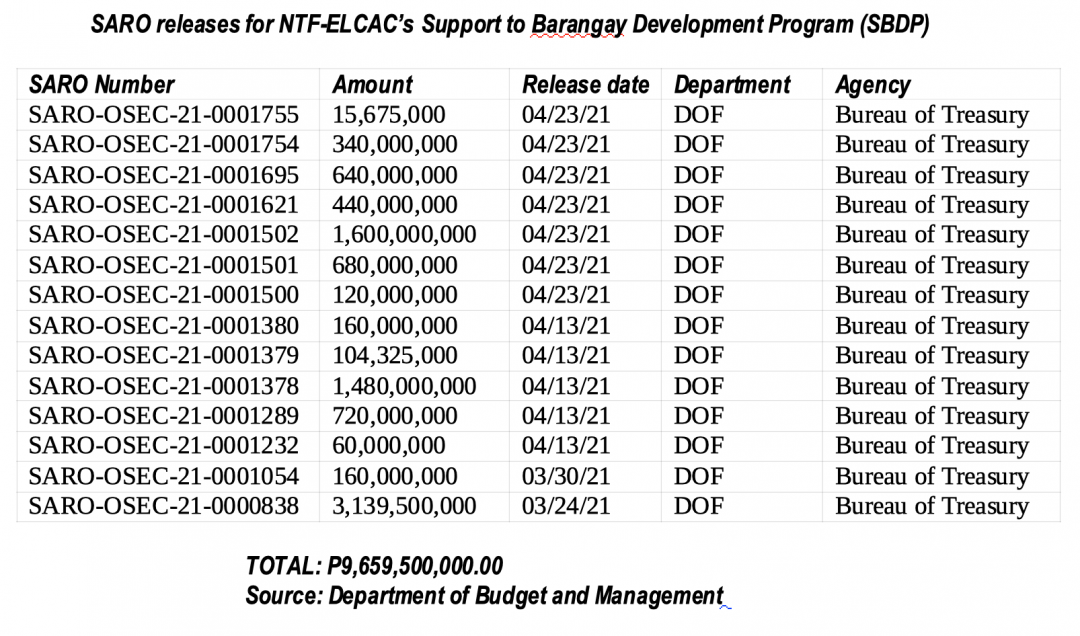 SARO is an authority issued by DBM to agencies to incur obligations during a specified period for a specific purpose, allowing them to award contracts which would later be paid by the government.

SAROs do not represent actual fund releases, but signify authorization for the implementation of projects. Fund transfers would only be facilitated after the DBM’s issuance of the Notice of Cash Allocation (NCAs).

With SAROs covering projects worth P9.66 billion, it is assumed that these amounts constitute ready-to-be-implemented projects at the barangay level. But details surrounding these approved SAROs are not readily accessible on the DBM website.

The NTF-ELCAC and the DBM must make the project location, project type, implementing unit, and contractors available to the public. Again, we should ask how much of these funds would end up in the AFP Engineering Brigade or in the LGUs. How much of these funds are going to redundant projects like farm-to-market roads? Without such details, these projects painfully trigger a pork déjà vu – at a time when COVID-19 patients are dying in hospital tents and families are desperately relying on community pantries for survival.

In the words of the gagged NTF-ELCAC spokesperson: Ask where our money went. But more importantly, we must seek to abolish an irrelevant task force which rabidly shoots down our right to freely think and speak.