You Are Here: Home → 2021 → April → 29 → #DuterteTraydor trends on Twitter amid continuing tension in West PH Sea 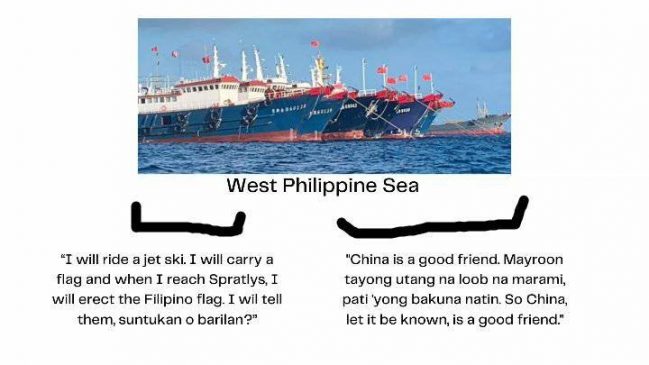 MANILA — #DuterteTraydor (which means Duterte treacherous) trended on Twitter after President Duterte expressed that he is avoiding war with China amid the presence of Chinese vessels in the Philippine territory.

“I’m stating it for the record. We do not want war with China. China is a good friend. Mayroon tayong utang na loob na marami pati yung bakuna natin. (We owe them a debt of gratitude for the COVID-19 vaccine) So China, let it be known, is a good friend and we don’t want trouble with them especially war,” Duterte said in his address to the nation, April 28.

In a statement, former Supreme Court Chief Justice Antonio Carpio said that Filipinos deserve and should demand a president who puts Filipinos first and foremost and who’s willing to defend the Philippine sovereignty.

“Filipinos deserve, and should demand, a President who loves Filipinos first and foremost and who will uncompromisingly defend Philippine sovereignty and sovereign rights in the West Philippine Sea”

Apart from Covid-19, Philippines could face food crisis in the very near future because 240,000 KILOS of FISH are ILLEGALLY taken away DAILY by Chinese fishing vessels. Save the Nation! #DuterteResign #DuterteTraydor #DutertePalpak Sign the Petition! https://t.co/rv5raUJvfG https://t.co/hNdd726bTE pic.twitter.com/PeZ3UrX7TJ

Duterte can’t tell the difference between a friend and an exploiter. China is a user who gives free vaccines but runs roughshod over our sovereignty with Duterte’s approval. Again, #DuterteTraydor #DuterteResign https://t.co/iGl7vEI7Z6

We don’t owe China thanks, period. It has invaded our territory with impunity and Duterte’s approval.

SINONG MAY UTANG NA LOOB SA CHINA???? Certainly not me and I’m sure majority of Filipinos would agree.#DuterteTraydor #DutertePalpak https://t.co/OJS2UFMcpw

Always waking up with some news about China and the West Philippine Sea and shows how ignorant Duterte is. This is a sign that in 2022 election, voters need to be wise in choosing a good leader to save us from danger not to let us be in danger.#DutertePalpak #DuterteTraydor

Related story: Bulatlatan: On giving a human face to the PH fight for sovereignty