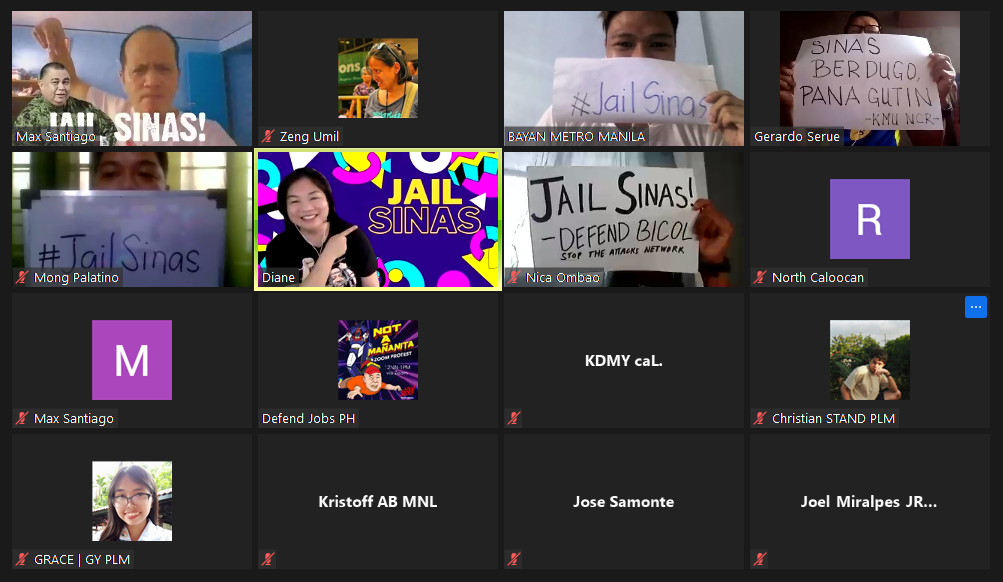 “A remorseless human rights violator like him doesn’t deserve a peaceful retirement. We will continue to fight impunity by working to make sure that active or retired generals who abuse their power like Sinas are put behind bars.”

MANILA – Relatives of victims of human rights violations and rights advocates called for the imprisonment of Police Chief Gen. Debold Sinas who ended his service today, May 8.

“We will not let this day pass without reminding the public of the crimes of Gen. Sinas,” Raymond Palatino, chairperson of Bagong Alyansang Makabayan (Bayan)-Metro Manila said during the Not a Mañanita Zoom Protest earlier today.

Palatino said the police general’s retirement “offers a chance for the victims of police-sponsored violence to seek justice.”

Diane Zapata, wife of detained labor organizer Dennise Velasco, said Sinas’s birthday should not be celebrated. “In the case of Debold Sinas, there should be no celebration of life of a man who does not respect life. Debold Sinas did not and does not respect life. How many activists celebrated their birthdays in jails? How many activists and even ordinary citizens will not be able to celebrate their birthdays because they have been murdered by police forces under his leadership?” she retorted.

Velasco and six others were arrested in a simultaneous raid on Dec. 10, 2020. Two of them, Manila Today editor Lady Ann Salem and trade union organizer Rodrigo Esparago were released last March 5 after the court granted their motion to declare illegal the search warrant and the seized items as inadmissible.

Zapata said Sinas only led the Philippine National Police into perpetrating more rights violations and furthered the culture of impunity during his service.

“From the his birthday man?anita to the evil tactics of murder and illegal arrests of critics of the government by planting evidence right in the middle of a pandemic—what a legacy to leave behind!” Zapata said.

Edward Ellorenco of Workers Alliance in Region 3 also slammed the effort of Sinas to further stifle the rights of workers when he proposed to the Department of Labor and Employment to require a national police clearance for transactions. This proposal was rejected by Labor Secretary Silvestre Bello III saying it would do more harm than good.

Reacting to Interior Secretary Eduardo Año’s announcement on May 5 that President Duterte will offer Sinas a new job, Palatino said that Sinas should not be appointed to a civilian position in the bureaucracy.

“He should be in jail,” Palatino said.

Casey Cruz of Bayan-Southern Tagalog also said that they will not be deterred from holding Sinas accountable for his crimes.

Cruz said Sinas was the accomplice of Southern Luzon Command commander Lt. Gen. Antonio Parlade in the commission of human rights violations in the region.

“A remorseless human rights violator like him doesn’t deserve a peaceful retirement. We will continue to fight impunity by working to make sure that active or retired generals who abuse their power like Sinas are put behind bars,” Palatino said.