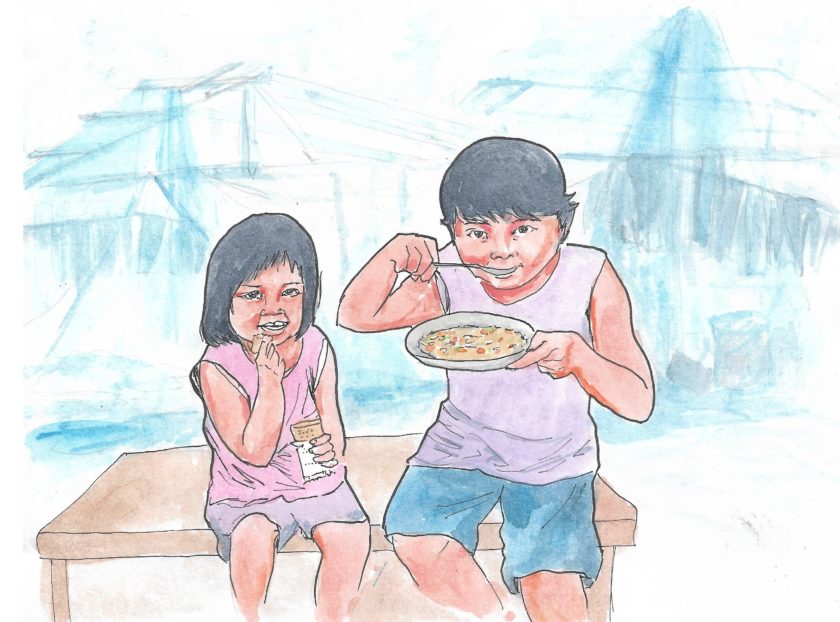 The supposed pillars of economic growth have always been wobbly. With the weight of the pandemic, they totally collapsed.

MANILA — President Duterte will give his last State of the Nation Address (SONA) amid a still raging pandemic. The COVID-19 crisis will be used not just to offer context to our economic growth rut in Duterte’s final year in office. For the regime, the pandemic also serves as an excuse for the way the economy plummeted.

Worse, the SONA will even try to convince the public that the economy did well despite the circumstances. It would seek to sell the notion that prospects are bright. The economic managers already got this propaganda underway in their pre-SONA briefing. Such mendacity is crucial for a regime that plans to stay in power beyond its term.

While the pandemic is in its current context, it does not explain the crisis of the Philippine economy. Whatever claims of rosy economic performance and prospects are at best dubious, if not utter deception. Data show that the policies and programs of Duterte continued and inflamed the structural crisis of our economy. To be sure, the pandemic made it more acute. But make no mistake – Duterte’s economic legacy is far worse than the pandemic.

Let us start with the macroeconomic data. The Philippine Statistics Authority (PSA) said that the gross domestic product (GDP) fell by 4.2% in the first quarter of 2021. This is now the fifth straight quarter of GDP decline.

What is important to note here is that the GDP has been steadily slowing down even before the pandemic. From a 7.1 percent expansion in 2016, GDP growth decelerated to 6.9 percent in 2017; 6.3 percent in 2018; and 6.1percent in 2019. In the year of COVID-19, the GDP contracted by 9.6 percent. It was the steepest decline among Southeast Asian countries, save for the 10-percent fall of Myanmar. The latter of course also faced a major political crisis on top of the pandemic last year. (See Table 1)

That the domestic economy fell the way it did when COVID-19 hit points to how deep its flaws are. That the GDP growth is at a historic low tells the underlying weaknesses of the economy. What are some of these flaws and weaknesses that Duterte, like his predecessors, failed to address?

The supposed pillars of economic growth have always been wobbly. With the weight of the pandemic, they totally collapsed.

From the demand side, household final consumption expenditure (HFCE) accounts for about three-fourths of the GDP. It consists of the value of expenditure on goods and services by resident households for direct consumption

HFCE fell by 4.8 percent in the first quarter of 2021, pushing the streak to four straight quarters of decline. While the pandemic obviously depressed consumption, HFCE has actually been slowing down even prior to the COVID-19 crisis. From a peak of 7.1 percent growth in 2016, it slacked up to 6 percent in 2017; 5.8 percent in 2018; and 5.9 percent in 2019.

Under Duterte (2016 to 2020), HFCE averaged an annual growth of 3.4 percent, the lowest five-year average in the last 20 years based on available PSA data. This means that even before the pandemic, Filipino households already have less capacity to consume compared to previous periods. But the pressure created by COVID-19 on incomes and jobs proved too much to bear.

The lack of basic industries and the semi-feudal character of the economy where millions rely on the land for a living but are landless caused a permanent crisis in Filipinos’ livelihoods. For the past half-century, this has been mitigated by remittances from migrant workers. But long before the pandemic, we have already noted the steady slowdown in such cash inflows from abroad.

In the national accounts, remittances from migrant workers are reflected in the net primary income from the rest of the world (NPIRW). In the first quarter of 2021, NPIRW fell by a whopping 75.8 percent, continuing a streak of seven straight quarters of contraction. As a result, migrant remittances today comprise a much smaller portion of the gross national income (GNI). In the first quarter of 2021, NPIRW is pegged at just 2.6 percent of GNI; in 2020, it averaged 7 percent. From 2000 to 2019, the ratio was 9.3 percent per year.

Over the past four decades, the average growth in cash remittances from overseas Filipinos has substantially declined. It paints a picture of long-term unsustainability in relying on external sources of income to fuel local consumption and drive domestic growth. COVID-19 is simply hastening this breakdown, as the global economy ground to halt. (See Table 3)

Without a viable industrialization and rural development plan where local jobs and incomes could thrive, Duterte set up the domestic labor market for an even deeper crisis. During the pandemic, the number of officially unemployed doubled from 2.26 million workers in 2019 to 4.52 million in 2020. The number of underemployed also increased from 5.79 million to 6.37 million. More alarmingly, the size of the labor force shrank from 44.22 million to 43.87 million. The decline implies that many workers were too discouraged to look for work and thus dropped out of the labor force.

Taken together, this means that about 3.20 million workers were affected by the pandemic either by outright joblessness, underemployment or hopelessness that jobs are available. Yet, these official figures do not even show the true extent of the jobs crisis. PSA data exclude from the labor force and do not count as jobless those workers who did not look for work in the last six months prior to the government survey or are unable to immediately take up work.

An alternative measure of unemployment by the polling firm Social Weather Stations (SWS) shows that there were 21.2 million jobless workers in 2020. It was 11.9 million higher than the average in 2019, meaning that such a number of workers lost their jobs during the pandemic.

The worsening state of the Philippine labor market has been a trend even prior to the pandemic. Looking at SWS surveys, the incidence of unemployment almost doubled from 9.8 percent in the 1990s to 18.7 percent in the 2000s. It further deteriorated to 23.1 percent in the 2010s, and is at 24.3 percent during the Duterte years (2016 to 2020).

Duterte and all previous regimes did not develop comprehensive plans to build job-generating local industries and strong domestic agriculture through genuine agrarian reform. These could have spurred more economic activities, boosted local household consumption, and stimulated long-term growth. The people and economy would have been in a stronger position to weather the tremendous impacts of the pandemic. (RVO)