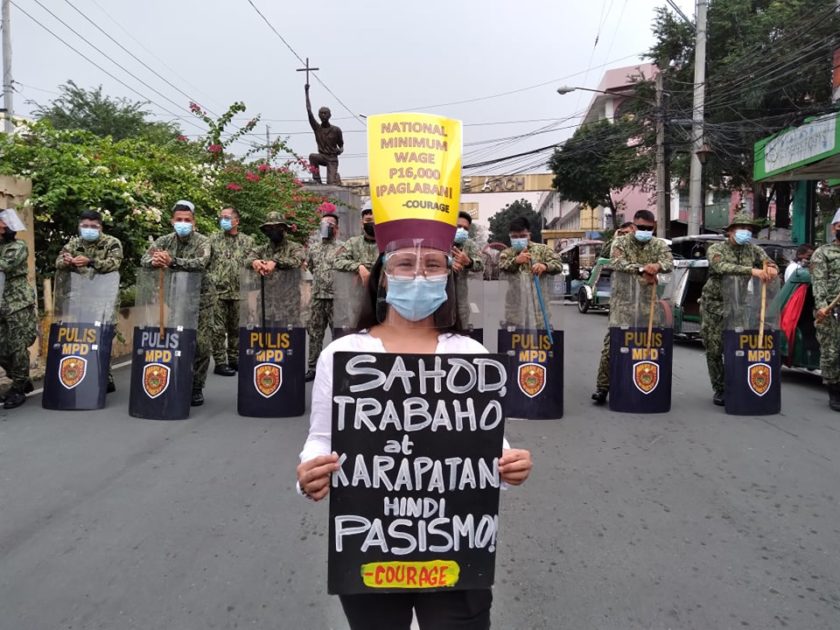 MANILA— A local advertisement here in the Philippines once asked – where can your P20 bring you? For government workers here, it meant a measly salary increase in the last five years of President Rodrigo Duterte.

“(President Duterte’s) performance is very poor among our ranks, especially on our calls for salary increase. While the military enjoys their 50-percent salary increase, government employees receiving salary grade one only got a P20-increase,” said Social Welfare Employees Association of the Philippines (SWEAP) President Alan Balaba.

Balaba is among the government workers unionists that recently held an online forum, where they gave President Rodrigo Duterte, who is now in his last months of office, a grade of “poor, poor, poor.” For government workers, the president did not only fail in his promises but also violated the rights of workers to a living wage, security of tenure, and the right to organize.

They said that the Duterte administration pushed for anti-worker policies, and attacked those who dared to dissent by red-tagging them.

“We agree that he should just resign as he himself expressed in one of his media rantings. We have had enough of this kind of regime,” government workers’ group Courage said in a statement.

Among President Duterte’s many election promises was to end contractualization. However, Roxanne Fernandez from the Kawani Laban sa Kontraktwalisasyon (KALAKON) said it continues to persist.

In July 2019, President Duterte vetoed the bill that aimed to prohibit labor-only contracting.

“Right there and then, we already lost our hopes that he will not lift a finger to end contractualization,” said Fernandez.

She added that there were also various memorandums that proved to be not in their best interests, including the hiring of job orders and contract of service workers until December 2022 and the 10 percent budget cut on the Maintenance and Other Operating Expenses (MOOE), where salaries of contractual workers are charged.

“When contractual workers fail to submit reports on time, that could cost us our jobs. We do not have the security of tenure. But our ranking leaders, including the highest in the land, are not removed from office even when the quality of work is so poor,” added Fernandez.

Attacks on human and workers’ rights

Instead of heeding their calls for decent salary and security of tenure, Courage said their union leaders and members are routinely subjected to red-tagging.

“The NTF-ELCAC, led by Undersecretary Lorraine Badoy and General Parlade, uses social media, print, radio, and television to harass us by tagging us as terrorists. We can see and feel the impacts of red-tagging and how it is a threat to our life and security,” said Sandigan ng mga Empleyadong Nagkakaisa sa Adhikain ng Demokratikong Organisasyon (SENADO) president Roselle Eugenio.

Eugenio said, “the government should fund people’s health, create jobs with a decent salary, and pave for peaceful and safe lives for its workers. This the government failed to provide us.” (JJE, RVO)