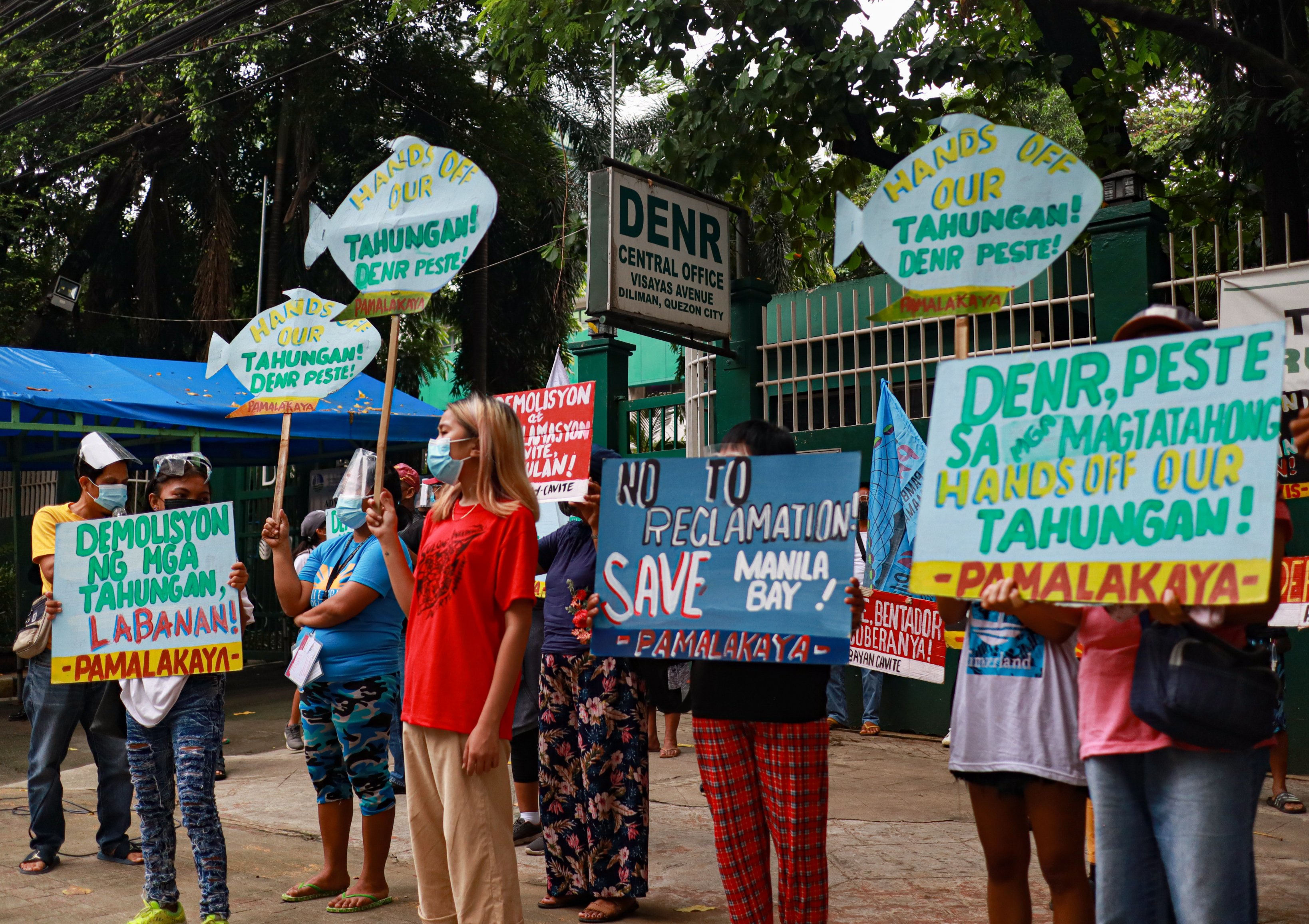 DENR CALABARZON released a statement on Tuesday claiming that the dismantling of “illegal” fish cages and pens in Cavite is beneficial to fisherfolk [1]. DENR recently announced plans on clearing several of these fishing structures after some of them were not able to renew their licenses due to their opposition to reclamation projects. As a response, fisherfolk conducted protests last Monday, September 6, in front of the DENR National Office in Quezon City, and on September 7, in Bacoor City, Cavite to express their opposition. The series of protests resulted in the postponement of the demolition.

Here are my comments to their Statement.

1. “Small and marginalized fisherfolk will benefit the most in the dismantling of the illegal fishing structures in Manila Bay area.”

The fisherfolk themselves fear that they will lose their livelihood. Why is DENR invalidating this concern? Reclaiming the coasts of Cavite to make way for big business will involve not only the demolition of illegal structures but even those owned by licensed owners. Eventually, the fisherfolk will be at the disadvantage.

The statement is silent on the reclamation project in the affected areas. It shows how tone deaf DENR is to the plight of fisherfolk on the ground. The ones who will have access to the seas will be the developers of Cavite’s reclamation projects. Either DENR is so myopic or it’s deliberately hiding the government’s ulterior motive behind the clearing operation. This “benefit” will be short-term because ultimately fishing and aquaculture structures will be removed to pave way to reclamation projects.

It appears that DENR is confusing fish pens with traps. Pens and traps are totally different. Fish pens and cages are structures used in aquaculture, while traps, such as fish corral (baklad), are fishing gears employed in the capture fisheries sector. Since fish pens are for aquaculture purposes, it is obvious that fisherfolk don’t fish there. DENR can’t claim that fish are “trapped” inside cages and pens, because they are being cultured there in the first place.

Does DENR even understand the difference between capture fisheries and aquaculture? Besides, also included in fishing structures that will be demolished are fish corrals and stationary lift nets (saprahan) that are definitely owned by small fisherfolk. How can DENR explain this loss of livelihood among fisherfolk?

4. “The only places where small fisherfolk could have a good catch are in farther areas where big fishing structures are no longer present. It would cost them some gasoline going back and forth.”

Again, these “big fishing structures” also include fish corral and stationary lift nets. The construction of stationary fishing gears, such as baklad and saprahan, is to efficiently catch fish along the coast without venturing farther into the sea. If DENR has conducted fishery surveys, they’d know that fisherfolk could earn as much as 1,000 pesos per night during peak season using these fishing gears.

DENR seemingly lacks understanding on the basic concepts in fishing technology. Additionally, as mentioned above, coastal reclamation in many towns in Cavite will eventually demolish all fishing structures, even those with permits. It will also inevitably displace fishing communities. Once these communities are displaced from the coast due to reclamation, how sure is DENR that fisherfolk will still have access to the coast and their traditional fishing grounds?

DENR is only mentioning the impacts of demolition on fish workers who work in aquaculture pens and cages. Is DENR even aware of the existence of small fisherfolk who own fish corrals and lift nets?

6. [DENR CALABARZON MBSCMO-4 Deputy Regional Coordinator] Rozaldo stressed that one of the objectives of their action plan for the dismantling of all illegal aquaculture structures within the waters of Cavite City, Kawit and Noveleta is to increase the fish catch of marginalized fisherfolk.

Wrong. DENR’s objective is to dismantle all structures, both aquaculture and fisheries. For what purpose? So that it would be easy for the Cavite provincial government and the Bacoor city government to reclaim the coasts of Cavite. DENR’s rehabilitation program is a farce. How can DENR possibly claim to “rehabilitate” our coasts when the ultimate goal of the local government is to dump soil on it, thereby preventing recolonization/re-establishment by marine organisms?

This is not just an issue on the “legality” of these fishing structures, but also on how this issue is connected to various reclamation projects in Manila Bay. DENR is time and again exposing itself as an anti-people, anti-poor, anti-fisherfolk, anti-environment and pro-big business government agency that conspires with large corporations in destroying our coasts not just in Cavite but also in Metro Manila, Bulacan and the rest of Manila Bay.

The author is a licensed fisheries technologist and the chairperson of the Diliman chapter of scientist organization AGHAM. He also serves as a fisheries consultant to the fisherfolk organization PAMALAKAYA. He has a bachelor’s degree in Fisheries and currently finishing his graduate studies in Marine Science. For the past three years, he has been a staunch advocate against reclamation projects in Manila Bay.