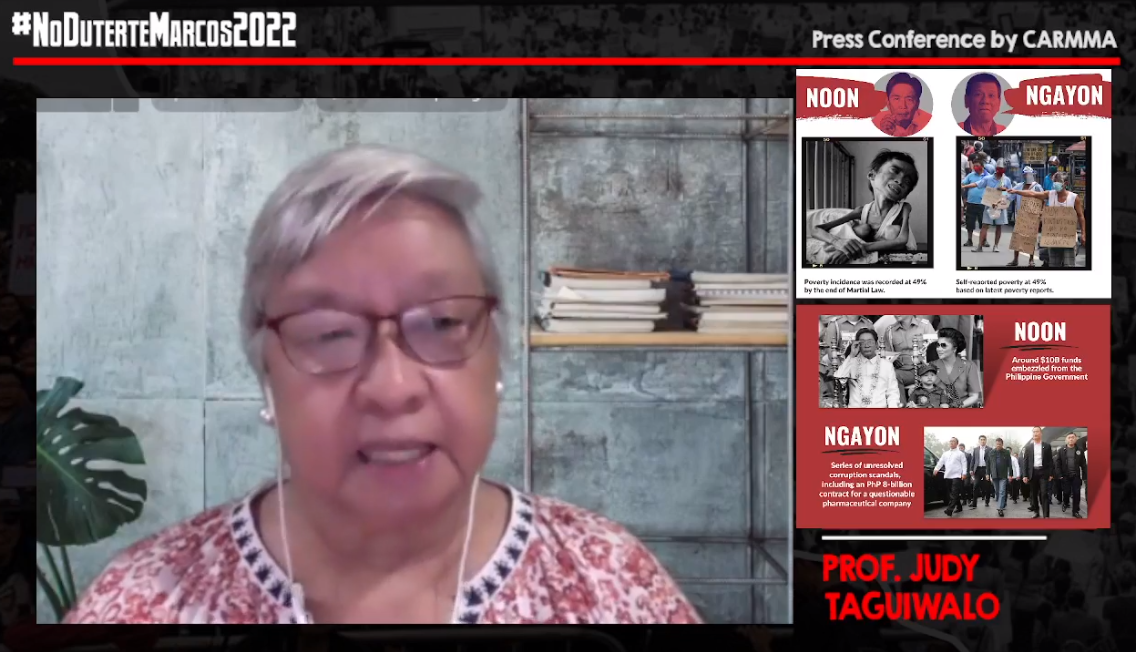 “This tandem will have disastrous impacts on our democracy and our quality of life as Filipinos, considering their bloody, corrupt, and anti-people records.”

This is the call of the activists who fought the dictatorship of Ferdinand Marcos.

“For the past few months, we have seen the visible machinations of the Marcoses and the Dutertes, along with their rah-rah men gearing for their perpetuation in power through bids in the 2022 national elections,” said Prof. Judy Taguiwalo, former welfare secretary and convenor of Campaign Against the Return of the Marcoses and Martial Law (CARMMA).

In a virtual press conference on Saturday, Sept. 11, survivors expressed their alarm and dismay at the prospect of a Duterte-Marcos tandem in the coming elections after President Duterte accepted the nomination of Partido Demokratiko Pilipino-Lakas ng Bayan for a vice presidential run in the May 2022 national elections.

Ferdinand “Bongbong” Marcos Jr. also confirmed his plans to run as president in next year’s elections.

“This tandem will have disastrous impacts on our democracy and our quality of life as Filipinos, considering their bloody, corrupt, and anti-people records,” Taguiwalo said.

Taguiwalo said there is parallelism between the Duterte and Marcos administrations.

“Our collective national history clearly remembers: the Marcoses and (their) cronies plundered our nation’s coffers, abducted and killed more than a hundred thousand Filipinos, left our debt-ridden economy in shambles and Filipinos in poverty,” Taguiwalo said. 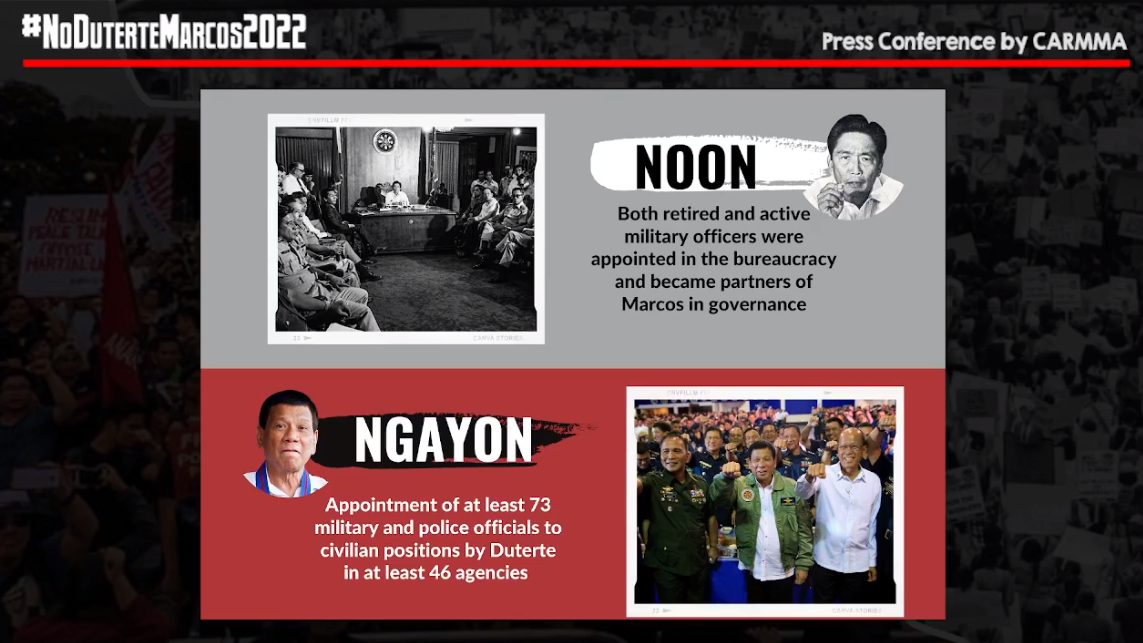 She added, “No less a tyrant is Duterte and kin who, five years since ascent into power, has cornered government contracts with impunity, killed thousands in a purported ‘anti-drug war,’ and has persecuted the opposition, media and dissenters,” emphasizing that both administrations are very similar in “their despicable kind of politics and governance.”

At least 73 military and police officials are appointed to civilian positions in at least 46 agencies under the Duterte administration.

“He wants to rule by fear by having these military and police officials in power. Not only that, he even admitted that with military and police generals in certain positions, they will not debate with him whatsoever and will just follow orders. If we will look at it, Duterte really has dictatorial tendencies,” Tañada said.

He added that both Marcos and Duterte also attacked those who oppose them, jailing alleged government dissenters.

Artist and martial law survivor Bonifacio Ilagan meanwhile said that both Duterte and Marcos are fascists, citing the different human rights violations committed under their administrations.

“Their brains are both filled with thoughts of martial law, both believe that the silver bullet is the solution to the problem of the nation, that the solution is one size fits all,” he said in a mix of English and Filipino.

He added, “The bottom line is that Duterte and Marcos’s legacy are these: crimes against the Filipino people and humanity and world class plunder and thievery. If we will not stop it, Duterte will definitely surpass Marcos’s record.”

Loans then and now

Former Bayan Muna Representative Neri Colmenares said that there is massive corruption and cronyism in both the Marcos and Duterte administrations. What’s worse, he said, is that the Filipino people are in dire poverty under both administrations.

“I remember during martial law, poverty was also worse. It is not true that it is the golden age. I remember falling in line for the ration of rice back then, and later on it was corn,” he said.

Colmenares said both administrations had acquired huge loans during their terms. These loans, he said, only went to corruption and were spent on projects that are not essential or needed by the people. 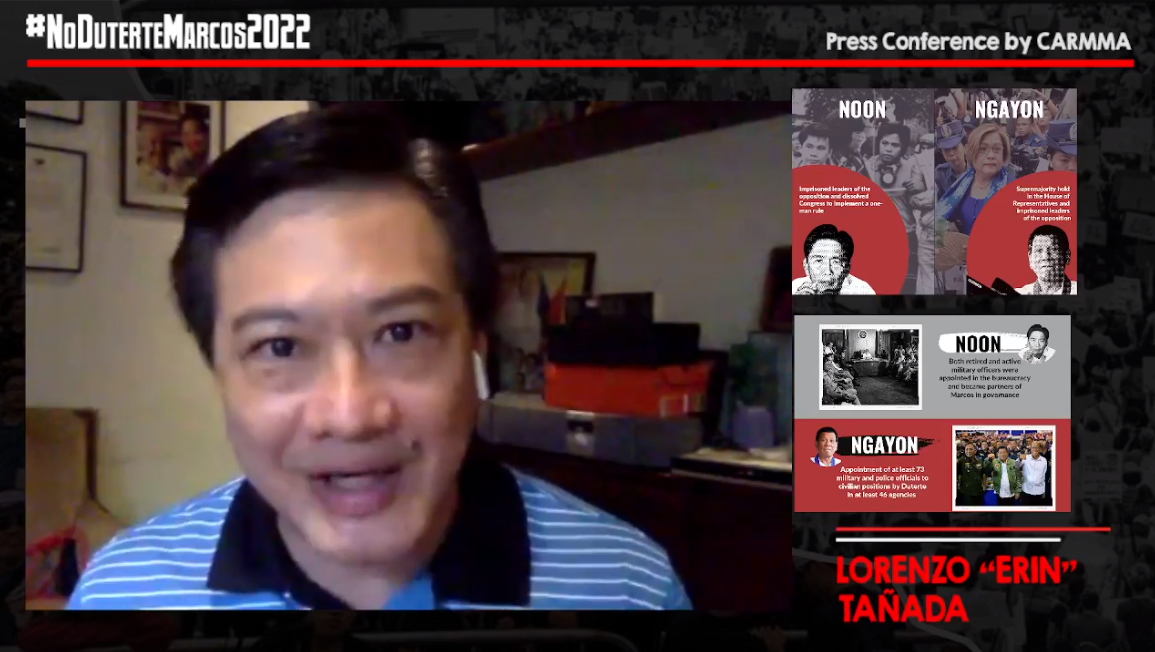 Colmenares is puzzled how the Duterte administration is able to claim P200 billion ($4 billion) worth of savings.

“Amid the pandemic, aid is not enough and there are no benefits for the health workers and yet there are savings like this? What are these savings for? For corruption? Pork barrel? For elections 2022?” Colmenares said.

Colmenares stressed that these savings are money which the government supposedly should spend for the people and should not be kept.

“Loans really have an interest that you have to pay. These savings are (the people’s) money, why not spend it?” he said.

‘We will not be fooled’

Chesca Persia a Sangguniang Kabataan officer in Taytay, Rizal meanwhile said that the youth of today will not be fooled as they were made aware of the crimes of Marcos.

Admittedly, she said that when she was young, crimes of the Marcoses were not discussed in schools.

“We were taught that the Filipino people were living happily during martial law. But now we know it is not true because we listened,” she said.

She also said that they are not blind to the realities under the Duterte administration, which, she said, made fool of the Filipinos by making them believe that “change is coming” under his term.

She added that in the 2022 elections they will vote for a leader who will lead the country into recovery, one that is transparent and honest.

“We will never accept a repeat of such regimes, which will be made worse with a Duterte-Marcos tandem in the 2022 elections. We call on all freedom-loving Filipinos to vigorously reject, campaign and vote against them and to continue to demand accountability from them,” Taguiwalo said.

CARMMA enjoined the public to be vigilant as the filing of certificates of candidacies start on October 1.

A national protest is set on Sept. 21, forty-nine years after the imposition of Marcos’s martial law.(RTS, RVO)