You Are Here: Home → 2021 → October → 4 → Union calls for PGH budget increase amid the sorry state of hospital 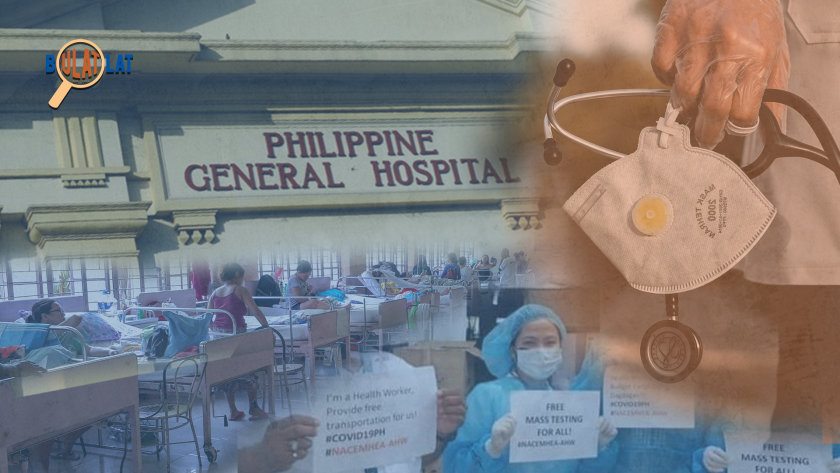 BACOOR, Cavite – Even before the pandemic, the Philippine General Hospital has long been understaffed. The burden of providing quality health services to the poorest of the poor amid limited resources and personnel would sometimes fall on the shoulders of health workers.

So when COVID-19 reached the country, nurse Maria Caridad Delos Reyes knew the PGH would need all the support it could get. This, she said, is the reason why they are supporting the call for a P10 billion ($196.34 Billion) budget for 2022, a far cry from the P5.66 billion ($111.14 billion) stipulated in next year’s National Expenditure Program (NEP).

“We cannot respond properly in the wards because of inadequacy in our equipment. At times, patients die without getting the treatments they need,” said Delos Reyes.

When PGH was established as a COVID referral center last March 2020, the patients who were severely affected were those who depended on affordable treatments and medicine that the hospital provides, including patients admitted at the hospital’s Cancer Institute.

The hospital was forced to limit its admittance to focus on COVID-19 patients.

While the PGH can definitely “rise up to the challenge” as a COVID-19 referral hospital, community medicine practitioner and University of the Philippines College of Medicine professor Gene Nisperos is concerned with the decision of choosing PGH when there were other suitable choices with complete equipment.

Nisperos confided that over the years, the state hospital has barely been given the proper funding it needed to operate efficiently. To bring out the hospital’s maximum potential, he added that PGH needs to be funded P10 billion ($196.34 billion) annually.

As the pandemic continues, the call for an increase in the hospital’s budget remains grim.

For perspective, the PGH received P6.87 billion ($134.90 Billion) in 2021. Thus, instead of increasing the hospital’s budget because of the increasing expenses due to the demands of the pandemic, the proposed budget cuts the hospital’s allocation by 18 percent.

Aside from the four-percent decrease in Maintenance and Other Operating Expenses (MOOE), the NEP 2022 provides no funds for UP-PGH’s capital outlay.

All of the buildings and equipment proposed in the UP Budget Proposal for 2022 never made it into the proposed 2022 budget.

The only category that increased was for its Personnel Services (five-percent hike), which is a given as per the implementation of the Salary Standardization Law (SSL).

Filipino Nurses United and the Alliance of Health Workers support the call for a P10-billion ($196.34 billion) budget for PGH.

“This can help to respond to our calls for due benefits for health workers, and the needs of our patients,” said Delos Reyes of the All UP Workers Union-Manila.

Effects of the budget cut

In a phone interview with Bulatlat, Delos Reyes lamented that the recent budget cut will seriously affect the welfare of patients, staff, and utility workers in PGH, including the shortage of health workers.

She said that the hospital already lacked at least 600 health workers prior to the pandemic. Due to poor support and protection, the understaffing was exacerbated, with health workers either availing of early retirement or resignation.

Their personal protective equipment has become both a blessing and a curse. While it protects them from contracting the virus, it also makes it difficult for them to look after their COVID-19 patients as it restricts their mobility.

In September, the PGH was already operating beyond its capacity for COVID 19 patients, with around 200 more waiting for admission. Patients, who are mostly severe cases and require a longer hospital stay, wait for COVID-19 beds to be vacant before they could be accommodated.

“It’s so hard to open up more beds, more wards if you do not have the right doctors to take care of them. A lot of our patients are severely ill so they really demand specialists, not just general doctors,” PGH Spokesperson Jonas Del Rosario said in a Philippine Daily Inquirer report. 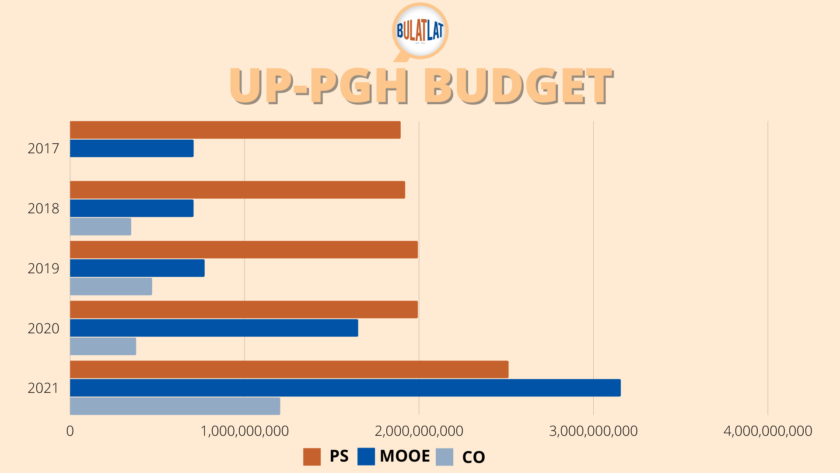 Since most PGH patients are mostly moderate to severe COVID-19 cases, Delos Santos said they require several equipment such as cardiac monitors, mechanical ventilators, and high flow oxygen. However, with the influx of patients at the hospital, their current equipment inventory is inadequate.

These should be funded, said Delos Reyes, both through the hospital’s Maintenance and Other Operating Expenses and Capital Outlay. The latter has zero allocation in NEP 2022.

Meanwhile, health workers in PGH are also among those who have yet to receive their complete meal allowance, transportation allowance, accommodation allowance (MTA), as well as their active hazard pay and their Special Risk Allowance (SRA). Of the P38,000 ($746.85) they were supposed to receive, they received only P14,000 ($275.15).

Moreover, the Department of Health proposed a singular allowance for all the health workers last September 24 during a public hearing of the joint Senate Committees on Finance and Ways and Means, completely removing their active hazard pay, SRA, and their MTA.

Robert Mendoza, Alliance of Health Workers National President, expressed his disapproval of this proposal, calling this “scheme” as “divisive and discriminating”.

“We, health workers, are disgusted with the DOH led by Secretary Duque because instead of implementing its mandate to provide safety, protection and welfare to the health workers and likewise show compassion, concern and support in this time of crisis, he did otherwise. This adds up to the many failures and offenses that he did to the health workers. The DOH divided, deprived and lowered our morale and dignity. The proposal laid out at the Senate Hearing was a manifestation of Secretary Duque’s indifference to health workers’ safety, protection and welfare and inhumane leadership.” Mendoza stated.

The fight for proper pay amid the risks of the health worker’s safety still continues. Yet the government remains unresponsive and casually proposes insensitive proposals.

“It has been two years since we began to put our lives on the line to defeat this pandemic. Still, the government has not allocated enough for the people’s health, and the welfare of health workers has yet to be looked into,” Delos Reyes said.

Prioritize the health of the nation

While the government has often dubbed them as heroes, Delos Reyes said these are but lip service if their benefits and welfare due to them are not provided to them. More than a year into the pandemic, she admitted that it also took a toll on their well-being, with their colleagues silently crying in the corners of the hospital out of exhaustion and fear of infecting their families with the virus.

Last September 28, the Alliance of Health Workers (AHW) went to the House of Representatives while the discussion of the 2022 DOH Budget was ongoing. AHW called for an increase in the health budget for 2022, prioritizing the health and safety of the people and the health workers.

“If the Duterte government does not prioritize the health and safety of health workers and the people by allotting higher health budgets, the country’s problem on COVID-19 pandemic will not be solved. Health workers will be gradually depleted and our health situation will eventually collapse,” AHW stated in a statement.

Now, Delos Reyes continues this call with her fellow health workers, hoping that the administration will prioritize the health of the nation.

“As it stands, the government prioritized uniformed personnel and infrastructure projects. We hope that health can also be prioritized,” said Delos Reyes. (JJE, RTS, RVO)