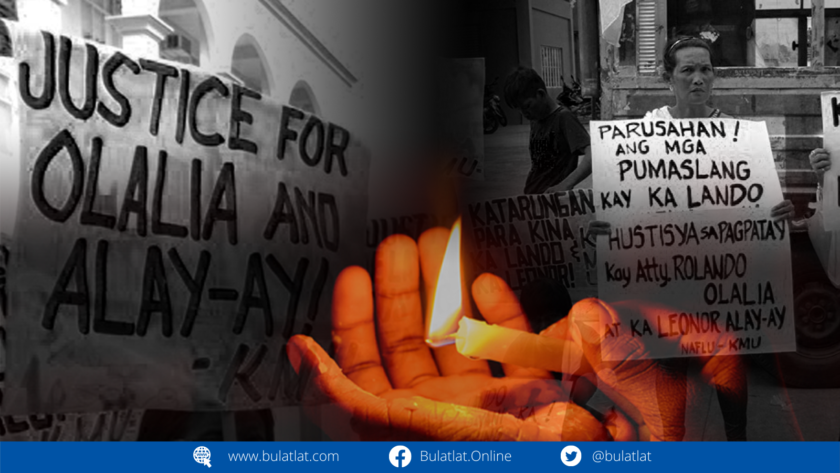 Today marks the 35th year since Lina’s long-time unionist husband Leonor and labor leader and lawyer Olalia were found dead. It was not until last month that an Antipolo court found three soldiers belonging to the Rebolusyonaryong Alyansang Makabansa (RAM) guilty. The alleged masterminds, however, remain scot-free.

Leonor’s story was often told in the shadows. However, for his wife Lina, the memory remains decades after he was killed.

Aside from being with Olalia when they were abducted, Lina said her husband was also a persistent labor rights defender. He joined and organized several unions to fight for the rights of the workers of Capitol Steel in Baesa, Quezon City, and Globe Steel in Cainta, Rizal, the latter known for launching a four-year strike at the height of martial law.

Leonor later found his bigger purpose when he joined the National Federation of Labor Unions under Kilusang Mayo Uno (NAFLU-KMU). “Leonor is a good person. He’s a responsible father, and he’s very diligent in sustaining the needs of our family. He tried many jobs like being a porter in Divisoria, a factory worker, and a jeepney driver,” Lina said.

Lina and Leonor met on the frontlines of the struggle for better working conditions. She remembered how the unionist became a regular at the Jopson Supermarket, owned by the family of activist Edgar Jopson, where Lina was then a cashier and former president of their union.

“I am working as a cashier in a food chain in Balintawak, while he is also working there in a factory of Globe Steel. We got to know each other since he became a regular in our store,” Lina recalled.

Their relationship soon blossomed into a family of six. She remembered how devoted Leonor was to his family. He was the go-to person whenever repairs were needed in their home.

“On Sundays, when we do not have work, we just stay in the house. We clean, we wash the clothes together, we cook and eat together as a family since he does not want to go out as it is a waste of time,” Lina said.

Being a unionist herself, Lina said she knew the dangers that her husband was facing. They would also talk about it, and never did she miss a day reminding Leonor to always be careful, especially with the increasing cases of surveillance. Whenever Leonor would enter the house with deep and long sighs, Lina said she knew that something had happened.

She feared for his life.

“Sometimes, the police even follow him in our residence, acting like they are looking for someone when they’re actually not,” she said.

But Lina knew the importance of her husband’s advocacy. She would constantly remind him, “Do not be afraid. Let us keep fighting.”

On Nov. 12, 1986, Lina’s worst fears happened. Leonor and Olalia were abducted late in the evening, following a meeting with workers of Ajinomoto in Pasig. That evening, Lina was restless and began to call her husband’s colleagues.

As she drifted to sleep in worries, Lina woke up from a nightmare where she heard three gunshots.

Still, Lina reported to work the following day while constantly in touch with colleagues from NAFLU for updates. But the afternoon came and she learned that two bodies were found in Antipolo, Rizal, now known as Olalia Road, and where a marker remembering their brutal killings now stands.

Labor leader Nitz Gonzaga, then a NAFLU organizer and part of its secretariat, accompanied Lina. They were shocked to see the bodies mutilated beyond recognition. Olalia, for one, was only identified by a scar on his leg while Leonor by his left hand that only had three fingers.

Their world was shattered.

“What the fascists did to my husband was evil. They are rotten to the core,” she said.

Lina recalled the emptiness they felt as they grieved for her husband’s murder. But she knew she had to be strong for her four children and the fight that Leonor had left behind.

When he was killed, Leonor and Lina’s four children were only aged 12, 11, nine, and one. For the three of them who were already going to school, they had to stop due to financial constraints.

All the dreams that Leonor and Lina had for their family seemed to have vanished at once, including their plans of buying their own home so they would no longer have to rent and move from one place to another, among so many things they wanted to do together.

“I am not only grieving. I am sad and dismayed that my children were the most affected by this tragedy,” Lina said.

Still, Lina continued her work as a cashier, aside from being a union president, not only to make ends meet but also to remember her husband being in the frontlines of the labor movement.

“It pushed me to be more agitated. As time went by, my resolve grew stronger as a mother and as a union leader,” she said.

Lina can still remember the thousands of workers, activists, and supporters that paid tribute to both Olalia and Leonor. Dubbed as a national day of mourning, their funeral was attended by nearly a hundred thousand mourners, and considered as the biggest protest since President Corazon Aquino assumed presidency following the fall of the Marcos dictatorship.

“Their solidarity was memorable and heart-warming, especially having to witness that as we marched along the roads of University of the Philippines [Diliman] to Mandaluyong,” said Lina.

But never did she imagine that it would take more than three decades for the court to finally decide, and render justice for them. Learning that three of the 13 suspects have been found guilty by an Antipolo court last month, she said, was a breath of fresh air.

Soldiers Desiderio Perez, Dennis Jabatan, and Fernando Casanova were sentenced to reclusion perpetua or imprisonment of 40 years without eligibility for parole and were ordered to pay more than P2 million ($39,968) compensation to the families of Olalia and Alay-ay.

Read: How the accused masterminds of the Olalia-Alay-ay slay relished impunity

While Lina is thankful that justice has been served, she considered the promulgation as a partial victory because the masterminds of these murders are not yet convicted. Those who were convicted, she said, were “only pawns of the people in power. The masterminds are just hiding until today.”

Their search for justice can be costly, too, said Lina. They missed several hearings in the span of three decades because they could no longer afford it. With the conviction of the three soldiers, they were supposed to get P900,000 ($17,696).

Still, Lina is resolved to continue pursuing justice. “Our wounds will never heal. Until we receive full justice for this gruesome and inhumane crime, we will fight.” (JJE, DAA, RVO)