As we approach the conclusion of the COP26 climate negotiations, we tracked the performance of the administration of President Rodrigo Duterte in the urgent task to negotiate for a just and sustainable climate future for the Filipino people.

What we saw was a national government that begs and displeases, much to the dismay of Philippine civil society delegations at Glasgow and vigilant Filipino citizens back home hoping for greater convictions and actions from the official representation of our global-top climate-vulnerable nation.

Begging for Scraps and Resource Traps
The Philippine delegation to COP26 was clearly courting climate finance facilities on energy transition, agriculture, and forests, whose aggregated current pledges amount to $27 billion. With multiple countries competing for access in each funding facility, we roughly estimate that only about $351 million of this will potentially be the Philippines’ share. 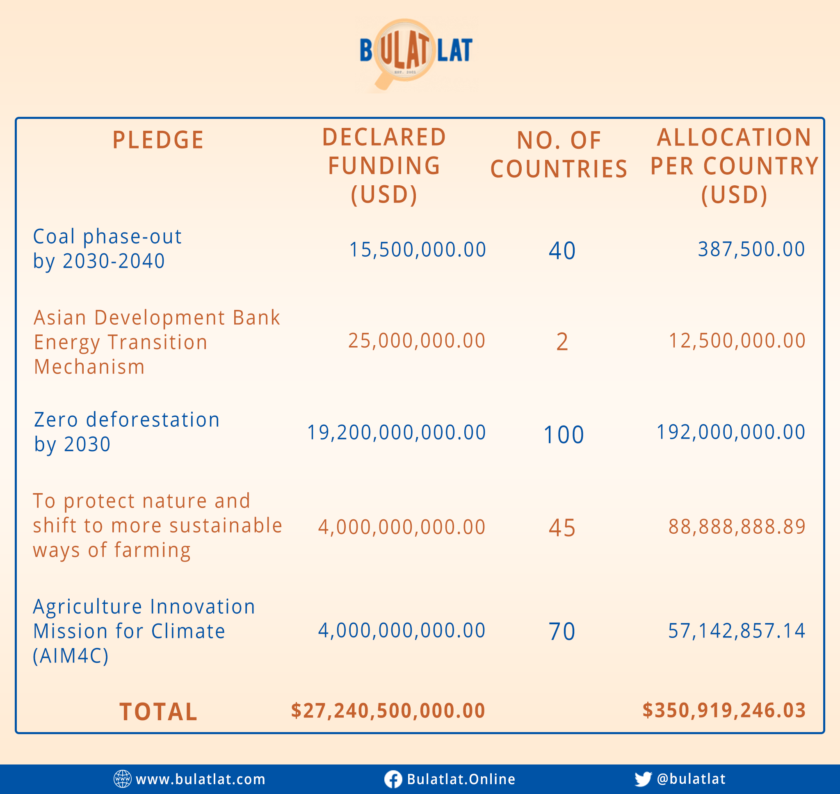 We must demand transparency on these financing mechanisms such as the Asian Development Bank’s Energy Transition Mechanism or the United Arab Emirates-United States initiated Agriculture Innovation Mission for Climate.

A cursory look at the Sustainable Finance Roadmap pitched by Finance Secretary Carlos Dominguez before the COP26 world stage reveals how it is alarmingly focused on market solutions such as foreign direct investment, loans and other financial intermediations, and public-private partnerships.

The roadmap might lead to the Philippines’ next resource trap as it does not feature unconditional just compensation, protectionist measures, onerous debt repudiation, and other mechanisms that capture the spirit of climate justice accountability over historic injustices and the loss and damages these have incurred.

Without a comprehensive planned economy framework for agrarian reform, rural development, national industrialization, and just transition, we will continue on a business-as-usual pathway that exploits natural resources and labor beyond our planetary limits.

A fresh surge of onerous debt, corporate auxiliary rights, and land and natural resource grabs that have typified the investments guaranteed by the Duterte government will cost us more than benefit us and consequently will further impoverish our vulnerable people and communities. Especially so if the finance will pour into false climate solutions such as biofuel and timber plantations, nuclear power plants, so-called sustainable and responsible mining, and the like.

Pledging Net Zero is Not Zero

The Philippines entered a ‘coalition of the willing’ pledges on zero deforestation, nature protection, climate-smart agriculture, and coal phaseout to access these financing facilities. All these pledges, however, are anchored on the ‘net zero’ rhetoric of offset mechanisms and snail-paced timetables.

The latest report of the Intergovernmental Panel on Climate Change (IPCC) demonstrated that the less we frontload our carbon emissions and carbon sink protection and enhancement prior to 2030-2040, the less will be the ability of land and ocean carbon sinks to capture and store emissions.

The Net Zero framing is what Filipinos would describe as the ningas kugon mentality, a case of too little, too late that will lead to worse irreversible climate impact scenarios in the foreseeable future.

The Philippine government, touting itself as a ‘world leader’ at COP26, is a party to this While the Philippines is a signatory to the pledge to phase out coal, Energy Secretary Alfonso Cusi opted not to sign the clause committing to the timebound objective of doing so by 2040. He also did not sign the clause committing to end all investment in new coal power projects.

At the national level, the Duterte regime has pursued extractive and pollutive programs diametrically opposed to targeted mitigation and adaptation outcomes:

The regime is dead-set on lifting a ban on open-pit mining after lifting the moratorium on new mining applications to entice up to 100 new large-scale mining projects.

The Duterte government also has at least 8.2 gigawatts worth of locked-in coal-fired power projects not covered by its recent moratorium on greenfield projects.

The regime also has anomalous biosafety regulations regarding genetically modified crops such as Golden Rice, which this government has consistently prioritized over agroecological practices.

The murders and human rights abuses against Filipino environmental defenders under the regime put more than 6.2 million hectares of landscapes and seascapes that defenders protect or dispute at greater risk of depletion and destruction.

In his three-minute speech at COP26, Sec. Dominguez declared that the Philippines “is determined to be a world leader in this fight against climate change,” furthering that they have “shifted from theorizing about climate change to executing practical climate adaptation and mitigation projects on the ground.”

But the substance of his talk and walk were narrowed down only to demanding climate finance. We hear no position from the Philippine government pressing ‘Annex I’ polluter nations and their counterpart ‘Carbon Major’ corporations to commit to stronger emissions cuts.

The Philippine government delegation’s performance really seems to boil down to appealing for climate funds from the developed world, and not antagonizing them to do so. This relegates the country to a mendicant position that does not in any way uphold its responsibility to demand climate justice on behalf of the Filipino people’s suffering from historic climate, ecological, and social injustices.

And there is much to demand from the Global North considering the immense challenges we face in the prospective post-COP26 scenarios. The climate talks are on track to once again be dead on arrival with a projected 2.4C global warming by 2100 based on current real greenhouse gas cut commitments.

The $130-trillion pledge by private institutions to be mobilized for climate finance does not have any indicators that it will not suffer the fate of the original 100 billion annual pledge by governments of previous climate talks—and that it will not come with strings of conditionalities attached.

Rich nations are still refusing to pick up the tab in so far as adaptation, loss, and damages for poor and vulnerable nations are concerned, which some African countries are demanding to be ratcheted up to $1.3 trillion per year.

Fight Returns to the Frontlines

For the Philippines, COP26 comes at the political juncture of the upcoming 2022 national elections. The dismal performance of the Duterte regime at COP26 is a fitting conclusion to its more than five years’ failure to avert the worsening environmental, climate, and more recently pandemic situation.

The recent announcement of the unholy Marcos-Duterte political alliance portends, however, six more years of such criminal neglect and abandonment if this brand of political leadership continues.

As expected, the fight returns to the frontlines. We need to fight tooth and nail not only to stop every extractive and destructive project at the village level, and to every program and policy at the national level. We also need to make sure there is a critical mass of ‘climate justice vote’ pledges that will usher in a political leadership more attuned with the urgency of the climate emergency.

Crucial to this would be a compelling vision, platform, and narrative that captures the life-and-death realities and imperatives of the Filipino people on this eleventh hour of the planet. We call on all environmental, climate, and social justice movements, including the broad political opposition, to march together in a broad, united front against the current dispensation, and collectively struggle for the people’s agenda for a just and green recovery.

Leon Dulce is the national coordinator of Kalikasan People’s Network for the Environment (Kalikasan PNE), a national grassroots-led environmental campaign center established in 1997. He is also the coordinator for Oilwatch Southeast Asia and the Yes to Life, No to Mining Southeast Asia networks.
leon@kalikasan.net

Lia Mai Torres is the executive director of the Center for Environmental Concerns (CEC), a Filipino NGO that helps communities confront environmental challenges through empowering education, community-based research, and people-oriented, patriotic, and scientific advocacy. She also serves as secretariat of the Asia-Pacific Network of Environmental Defenders (APNED). Lia was a civil society delegate to Glasgow to monitor the ongoing negotiations at COP26.
lia@cecphils.org