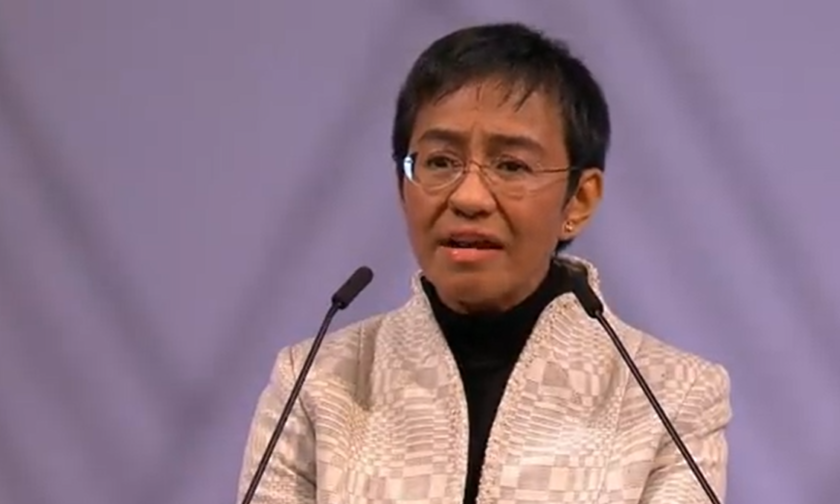 “I stand before you, a representative of every journalist around the world who is forced to sacrifice so much to hold the line, to stay true to our values and mission: to bring you the truth and hold power to account,” said Ressa as she paid tribute to journalists all over the world who have been persecuted for doing their job.

"Every day, I live with the real threat of spending the rest of my life in jail just because I’m a journalist. When I go home, I have no idea what the future holds, but it’s worth the risk."

In her acceptance speech, she highlighted that 22 journalists have been killed under President Rodrigo Duterte’s administration. Among the most recent was Jess Malabanan, a former journalist for international news Reuters who covered the government’s anti-illegal drug campaign, who was shot dead while tending to their small store in Calbayog City, Samar on the evening of December 9.

The new Nobel laureate, who was found guilty of cybercrime last year along with former colleague Reynaldo Santos Jr., is still facing seven cases. All these cases, press freedom advocates said, are but attempts to silence her and her media organization.

“I didn’t know if I was going to be here today. Every day, I live with the real threat of spending the rest of my life in jail because I’m a journalist. When I go home, I have no idea what the future holds, but it’s worth the risk,” Ressa said.

The Philippines is one of the world’s most dangerous places for a journalist, according to the 2021 World Press Freedom report of international media watchdog Reporters Without Border (RSF).

Journalists here, too, have been subjected to harassment and red-tagging. With the national elections looming, the National Union of Journalists of the Philippines said such attacks may increase – as seen in the jeering of ABSCBN journalists who were covering a gathering where presidential aspirant and son and namesake of the late dictator Ferdinand Marcos Jr. was attending. Fortunately, the group said, the incident did not escalate.

Ressa said, “the destruction has happened. Now it’s time to build – to create the world we want.” (JJE)