You Are Here: Home → 2022 → January → 19 → Kabataan Partylist and youth representation under the Duterte presidency

Kabataan Partylist and youth representation under the Duterte presidency 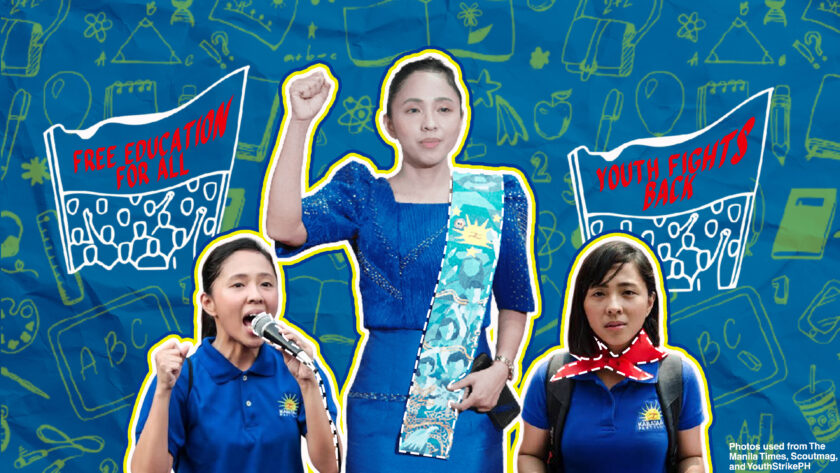 MANILA — Standing on the stage, looking at the crowd in front of her, Kabataan Partylist Sarah Elago asked, “Am I too young to change the world?”

For the youngest lawmaker in the House of the Representatives, the youth’s answer to the question is clear. The burden to shape the future does not lie on a single person.

To change the world, after all, is to struggle collectively, as Elago expressed, “For wherever there is a struggle, there is hope.”

Four years after she gave that speech in a forum organized by the Philippine Commission on Women, Elago now finds herself in the last year of her term. Soon, she will need to vacate her post.

Kabataan Partylist had always secured a seat in the lower chamber for the past decade. As it has always been, its new nominees for the upcoming elections are student activists. Elago was in a similar position.

In the streets of the Philippines, effigies and placards have become a medium of dissent for activists amid heightened state repression. Farmers and workers have been protesting in the capital for years, calling for land reform and living wages. Elago stood among their ranks, supporting their campaigns within and outside Congress.

But Elago’s involvement in the people’s movement was a process instead of a sudden burst of political awakening.

In elementary school, Elago was a member of different school organizations like the Glee and Declamation Clubs.

“You can see there the power of unity that is why, even from before, my perspectives was a continuous process of searching as to how I could contribute to our society as a Filipino youth,” Elago said.

After graduating from high school, Elago would enter the University of the Philippines- Diliman. She obtained a Bachelor of Science degree in Hotel, Restaurant, and Institution Management. In her senior year, Elago was elected as national president of the National Union of Students of the Philippines (NUSP). As an alliance of student councils, NUSP tackled issues related to education.

“The number one issue that unites all student councils in the country is the right to education and the right of students in and outside the school as Filipino citizens,” Elago said.

There were four primary campaigns when Elago was still in the NUSP: quality education, student rights and welfare, abolition of policies treating education as a business, and academic freedom.

Since then, the student union has continued to forward the same campaigns, proof that anti-student policies inside schools were passed on from one administration to another.

While in the NUSP, Elago would later attend the national convention of Kabataan Partylist. From different youth organizations, Elago was chosen as the first nominee of the party-list in the 2016 elections.

After the campaign season ended and votes had been cast, Kabataan Partylist had successfully clinched its place in the lower house. Elago would also be the youngest lawmaker in a crowd of politicians with different loyalties and aspirations.

But she was not alone. Kabataan Partylist has always been part of the Makabayan bloc, a coalition of leading progressive lawmakers. For Elago, working with the group is both inspiring and challenging.

Elago shared that an important perspective she learned from her time with Makabayan is that the youth should not isolate themselves from the other sectors of society. She also expressed that her experience with other Makabayan legislators was an everyday affirmation of the need to strengthen the unity between students who are working with other sectors to ensure that the voice of the people will prevail.

But while Makabayan continues its progressive tradition, it is no secret that other lawmakers outside of the coalition are standing on a different side of the political spectrum.

Since the legislature is responsible for the creation of laws, Elago said that numbers were necessary to push for house bills and other policy measures. It is important therefore to talk to other lawmakers outside of the Makabayan bloc. Still, Elago said that there are non-negotiable policies.

“Our talk with other legislators is always issue-based and is also grounded on principled unity,” Elago said.

One of the highlights of Kabataan Partylist in the lower house is its legal struggle for the abolition of the tuition system. Eventually, a free higher education law was passed by Congress and approved by the president. But before it was even consolidated in a single bill, the version filed by Kabataan Partylist also called for a nationalist, scientific, and mass-oriented curriculum.

It is nationalist since it aims to instill students with patriotism to fight against foreign domination and tyranny. It is scientific as it would have guided students to a scientific worldview that would attempt to raise their social consciousness. It is also mass-oriented as it wanted to train students to serve the nation and communities in need.

For years, campaigns for a better education system have been at the heart of the student movement. The struggles of students in colleges and universities have existed for decades. Students have to budget their expenses on books, transportation, and rent amid economic uncertainty. Elago saw these struggles herself while she was studying at UP- Diliman.

“The increase of tuition fee is not a joke. And that is where I directly saw the impact of the rise of tuition fees and other school fees and the high cost of education in our country,” Elago said.

Besides a new legislature, Elago also needs to work under a new regime. In 2016, President Rodrigo Duterte began to consolidate his power. From a mayor in Davao, he became arguably one of the most powerful politicians in the Philippine government.

Human rights violations quickly surfaced in his first year of office. Thousands were killed in his war on drugs. The youth were also affected by this policy. They have lost families and at times, their own lives.

“The criminalization of dissent is worse. The weaponization of social media just to destroy the reputation and to belittle the voice of the youth and students. The discrimination experienced by the youth is really worse just because they are outspoken on different issues,” Elago said.

Elago said the attacks started when the youth began to criticize the administration’s bloody approach on drug-related issues.

One of the manifestations of state aggression to its critics is red-tagging. The Duterte administration has repeatedly tagged its critics as terrorists. In the digital space, disinformation has also targeted individuals who dared to speak against Duterte.

Kabataan Partylist and Elago have not been spared from red-tagging. At first, she was shocked by the government’s use of public funds for a dangerous practice. Eventually, Elago said that instead of ignoring the practice, there was a need to call out the state-sponsored attacks.

The accusations were baseless and dangerous, but the government refused to stop its assault on the opposition. It even created an agency whose main job involved red-tagging.

The state’s anti-insurgency task force, the National Task Force to End Local Communist Armed Conflict (NTF-ELCAC), is a publicly funded institution that is one of the organizations behind the redbaiting of different activists and groups critical of the current administration. Over the past months, NTF-ELCAC has attempted to file a disqualification case to prohibit members of the Makabayan bloc, including the Kabataan Partylist, from running in the next general elections.

“On the part of Kabataan, we need to oppose red-tagging. This is wrong, and it endangers and is gravely dangerous for all those who are being targeted,” Elago said.

Besides urging to resist red-tagging, Elago also called for those who are behind such attacks to be held accountable.

Elago said that the party-list has demanded a scientific approach to the pandemic instead of a militarized approach. In the early days of the pandemic, Duterte used the police and military to guard checkpoints and enforce lockdown measures. According to Elago, relief efforts before and amid the pandemic are also critical for youth representation.

Amid their pandemic program, Kabataan Partylist presented its new set of nominees as the election nears. For Elago, her future plans involve helping Kabataan Partylist win. As a representative, Elago said that she still hoped to contribute to the people even after her term ends. 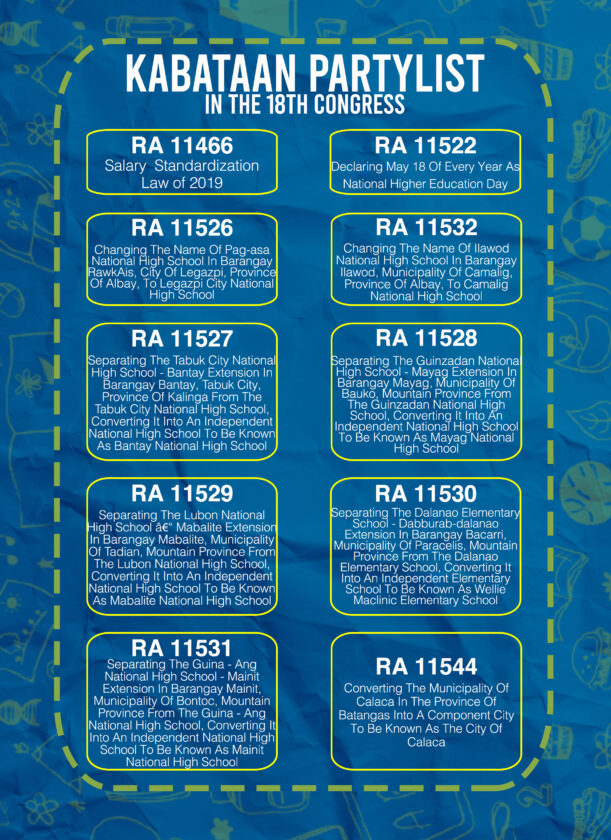 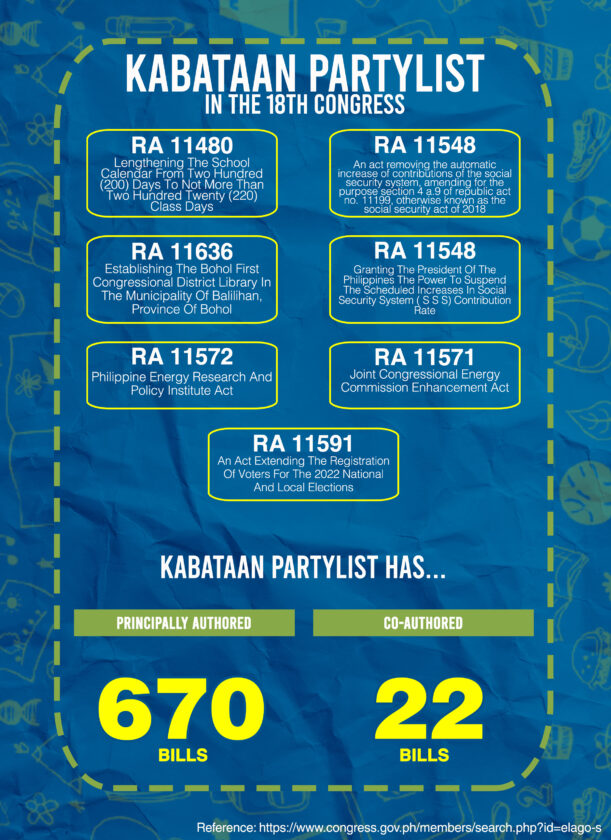 “It is my desire and I have high hopes that I’d be able to continue to contribute in the people’s struggle, and it is an honor for me to have been able to serve and to contribute to the voice of our many fellow Filipinos who hope for meaningful change,” Elago said. (RTS, RVO)