Why presidentiables’ stand on terror law is an election issue

MANILA — A human rights defender and one of the petitioners questioning the constitutionality of the terror law said it is important to weigh presidentiables and vice presidential candidates’ take on the controversial law as it may impact the country’s human rights and political landscape in the coming years.

“The views of candidates on the ATA [Anti-Terror Act] are relevant in weighing their standpoint on human rights and democracy – with the ATA considered by petitioners at the Supreme Court as a law that can be most dangerously used to silence political dissent. What is at stake is whatever is left of our civil liberties and freedoms that will be infringed upon if ATA is fully implemented,” Cristina Palabay, secretary general of Karapatan, told Bulatlat in an online interview.

De Guzman and vice presidential candidates Walden Bello and Sen. Francis “Kiko” Pangilinan are openly against the ATA, citing violations on human rights.  Robredo said that “any anti-terror legislation should not be used as a pretext to stifle freedom of expression or legitimate dissent.”

Pacquio and running mate Lito Atienza are open to amending the ATA. 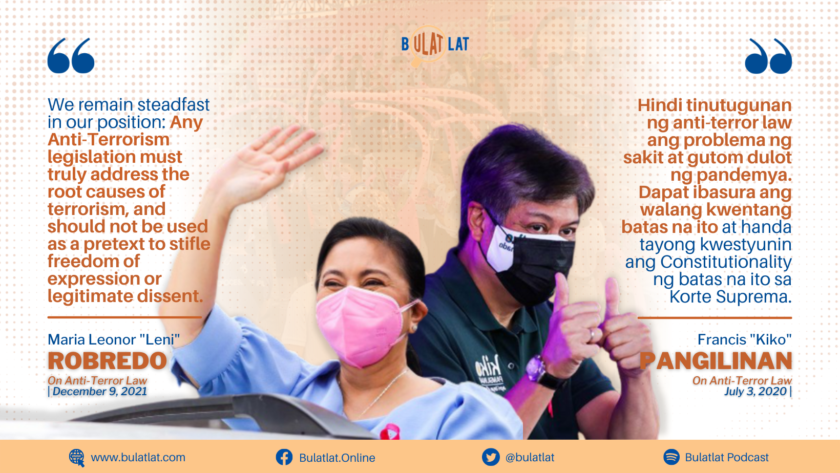 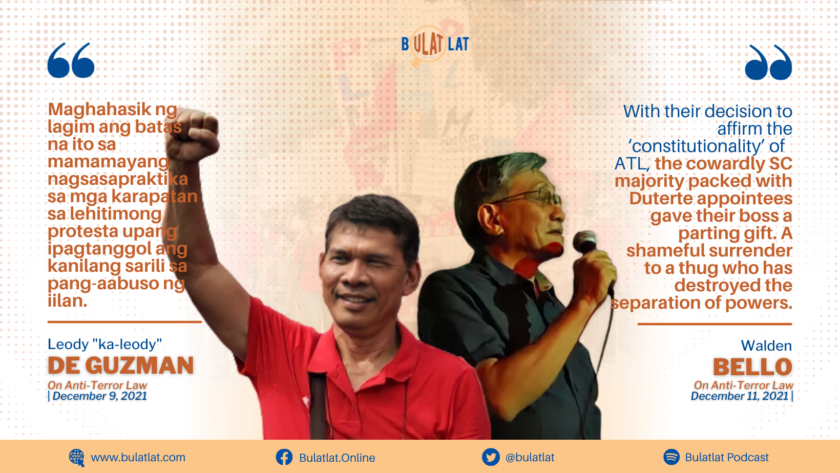 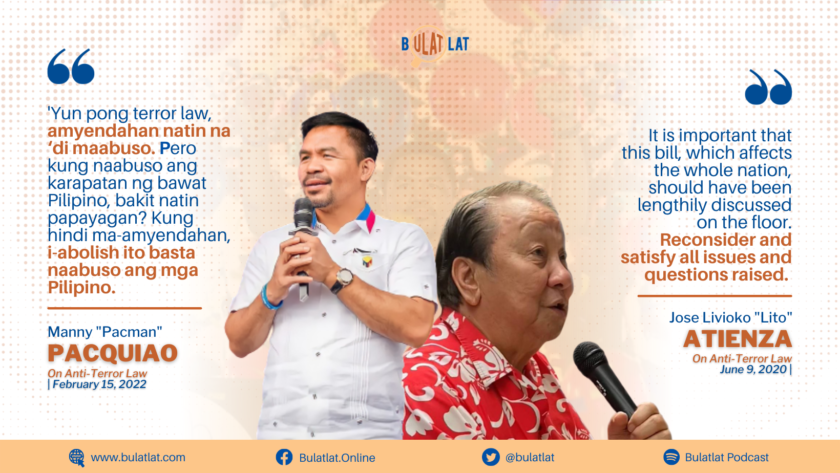 Republic Act No. 11479 or the Anti-Terrorism Act of 2020 was signed into law during the pandemic amid strong public condemnation. This has since been one of the most challenged laws before the Supreme Court, with petitioners questioning its constitutionality.

In December 2021, the Supreme Court upheld its constitutionality except for portions in two provisions.

Read: The terror inside the Anti-Terror Law

Palabay said that despite this, “those running for executive and legislative posts who will stand against this dangerous law can push for legislation that can repeal the ATA. If not, it can potentially impact on the country’s human rights and political landscape for years and generations to come.”

Panfilo Lacson and his running mate Sen. Vicente Sotto III, both authors of the ATA, remain adamant in defending the draconian provisions of the law.

Meanwhile, it comes as no surprise that Ferdinand Marcos Jr., son of the late dictator, and his vice presidential candidate Sara Duterte, daughter of the president, are also for the ATA. While Lacson and Sotto attempt to douse suspicions that the ATA would be used against political dissenters, Marcos Jr. and Sara Duterte are both toeing the dangerous line of anti-communist task force that political dissenters are “communist-terrorists.”

Marcos Jr. even praised the National Task Force to End the Local Communist Armed Conflict (NTF-ELCAC), known for red-tagging anyone who expresses legitimate criticisms to the government. 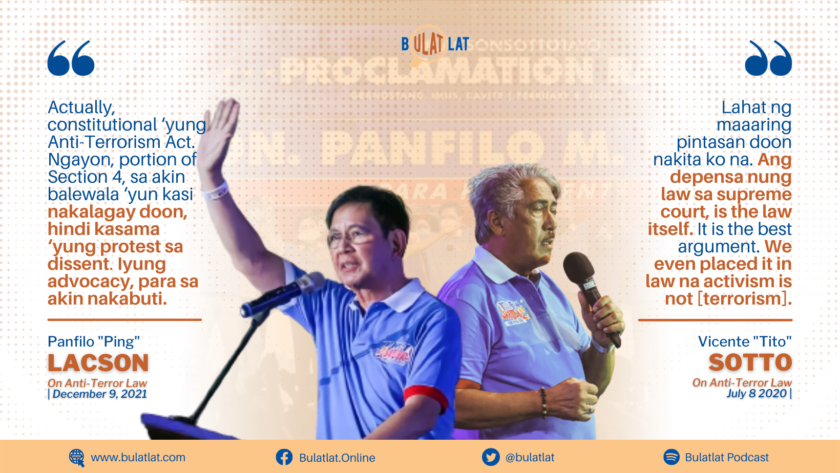 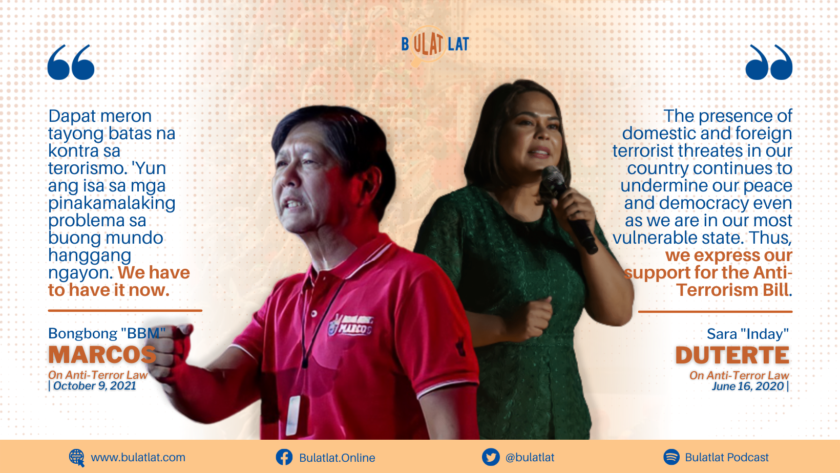 Unfortunately, Francisco “Isko” Moreno does not have a categorical stand on the issue. His running mate Willie Ong has not issued any statement yet on ATA. 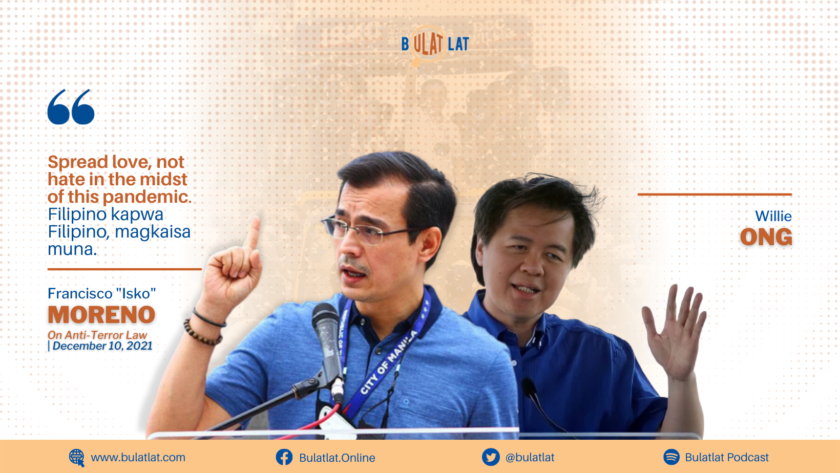 Palabay said, “we enjoin on all candidates for national posts, especially the presidentiables, to call for the repeal of the ATA. The whole framework of the law is unacceptable in a so-called democracy.” (With reports from Emily Vital) (RVO)