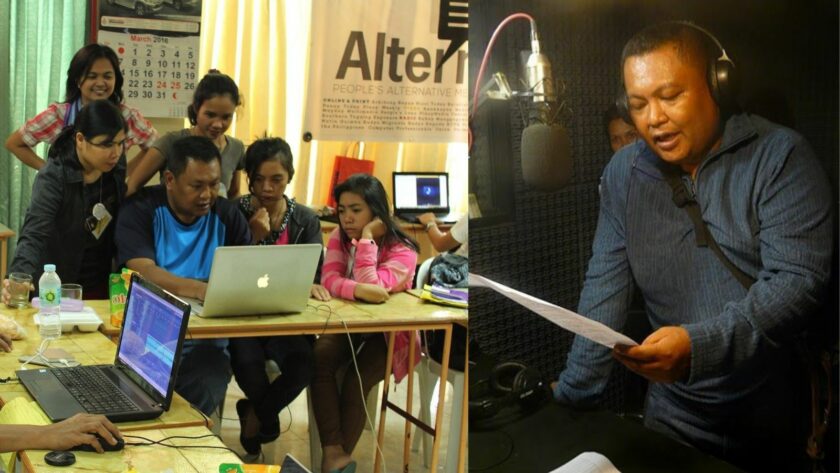 MANILA — Over the weekend, the University of the Philippines’ Community Broadcasters Society and the Department of Development Broadcasting and Telecommunication of the College of Development Communication awarded the first-ever Ka Louie Tabing Memorial Achievement Award to journalist Raymund Villanueva, director for radio of alternative news outfit Kodao Productions.

In an online program, Trina Leah Mendoza, chairperson of the UP Los Baños – Department of Development Broadcasting and Telecommunications, said the journalist of 25 years was being honored for his significant contribution to developing community radio in the Philippines in recent years, particularly in establishing community radios in the country and in providing capacity-building.

Villanueva, in his acceptance speech, said they are committed to doing so, “because social justice may only be achieved if the people’s voices are free.”

“There can be no democracy if the people are gagged,” he said.

Villanueva belongs to the alternative media group Kodao Productions, whose name is derived from the knotted rattan string that served as the country’s first calendar. Each knot, the alternative news said, represents a community event. This is what Kodao has been doing since it was established in 2001 through its documentaries and radio programs.

“The nature of community radio broadcasting is about development, particularly in communities that are underserved by the dominant media. It attempts to amplify the voices of communities and the sectors in it, including farmers, women, youth, and indigenous peoples on issues and their aspirations,” Villanueva told Bulatlat.

Kodao Productions also helped in the establishment of community radios in many parts of the country, including the likes of Radyo Sagada and Radyo Cagayano. This is coupled with capacity-building programs. However, the history of the community radio movement here, he added, is marred with state violence.

Among the first radio programs that they have been able to produce in 2001 was Ngayon na Bayan, which was “suspended until further notice” following the signing of Proclamation No. 1017 by President Gloria Macapagal-Arroyo. This declared the country as being in a state of national emergency back in 2006 for the supposed conspiracy between the traditional political opposition and the Communist Party of the Philippines, the National Democratic Front of the Philippines, and the New People’s Army.

Read: Critical Radio Show Now Off the Air, Listeners Try to Bring It Back

The multi-awarded Ngayon na Bayan, which aired from Monday to Friday, 2:30 p.m. to 4:00 p.m. on DZRJ, was considered the first “media casualty” of President Arroyo’s state of national emergency. This despite receiving recognitions such as the Kapisanan ng mga Brodkaster ng Pilipinas (KBP or Philippine Broadcasters Association) 2002 Golden Dove Awards and being a consistent finalist in the Catholic Mass Media Awards (CMMA) from 2001 to 2005.

To this day, community journalists are still being subjected to different kinds of state attacks, some graver than others.

Among them was Elena Tijamo, a community radio journalist and development worker in Cebu, who was abducted from her home in 2020. A year later she surfaced dead in a hospital in Metro Manila. Meanwhile, Tacloban-based community journalist Frenchie Mae Cumpio, who was supposed to anchor a community radio, remains in jail, following a raid back in 2020.

She was charged with trumped-up illegal possession of firearms and explosives and was also accused as a high-ranking officer of the Communist Party of the Philippines (CPP).

“Now, we are subjected to more red-tagging by the NTF-ELCAC all because community radios are oriented to advocate for development. The state would not want the people to have their own voices, much less talk about issues such as human rights, right to self-determination, to development, to land,” Villanueva told Bulatlat.

Apart from the attacks mentioned, Villanueva said that it is increasingly difficult to set up because of government restrictions and local politics that also come into play. Frequency assignment and franchise renewal, too, were treated as political commodities, with the recent denial of the ABS-CBN franchise and their frequencies later assigned to allies of President Rodrigo Duterte.

“Big networks should not be allowed to have more than one frequency. The rest should be given to community radios, schools with broadcasting courses like DZUP, and even local government units, which can use it like a public broadcasting system,” said Villanueva.

As it stands, there is a Philippine law that mandates broadcasting systems to go fully digital. However, while frequency problems may soon be eased as a result of going digital, Villanueva said other restrictive government requirements and licenses still take a heavy toll for community radios to truly flourish. To ease these requirements, Villanueva said legislation must be done.

He added that while those in cities have access to the internet, there are many communities that do not have access to it. And if they do, he said that a “great majority is commercial, funded by big pesticide companies, and without development in sight.”

Community as the core, not commercial interests

Despite challenges, Kodao Productions found ways to bring radio programs to urban poor communities, with microphones wired to speakers and broadcasted into the entire neighborhood. These radio programs, though far and few in between, and hardly sustainable, help prepare urban poor families whenever there is a looming demolition threat, said Villanueva.

In a separate interview with Kodao Productions Executive Director Jola Diones-Mamangun said that the radio programs they produce center on the community as its core. As such, the relationship between radio programs and the communities they serve “remains strong.”

“As long as Kodao has the trust and love from the community, our outfit will continue to remain strong,” Mamangun told Bulatlat in a phone interview.

Apart from their radio programs, Kodao Productions has also produced documentaries. Among the most recent was that on Baby River, the son of a political prisoner who died just months after being separated from his mother. This documentary recently won Best Short Documentary honors at the 2nd Pinoy Rebyu Awards by the Society of Filipino Film Reviewers.

For Villanueva, on the other hand, to see the community radio flourish in the Philippines, where communities are able to express their redress and aspirations without fear of retaliation from state forces, is not just a dream but a struggle to wage. (RTS, RVO)