Here is a quick look at the stand of select senatorial candidates on the demand of workers for wage hikes and end to contractualization.

MANILA – Sometime in 2016, then newly-installed President Rodrigo Duterte said he wants equal pay for workers in the country in a bid to decongest Metro Manila. But not only did a national minimum wage fail to happen in the last six years, the Duterte administration is also the only post-Marcos administration with both the least number of wage increases and the lowest wage hikes ever.

As such, those running for public office are promising to increase wages. But how much is enough? And are there concrete plans to see this through?

Of the select senatorial candidates, five progressives and labor leaders have expressed support for a national minimum wage. This will essentially abolish the regional wage boards and remove the wide pay gap between the Philippine capital and the rest of the regions.

“Congress delegated its power to set minimum wages to the regional wage boards. This has led to a race to the bottom, with regions trying to compete with each other in lowering wages to attract investors and eroding real incomes for workers. It has created the situation where minimum wage workers can’t even earn enough to provide their families the most basic needs,” former lawmaker and human rights lawyer Neri Colmenares said. 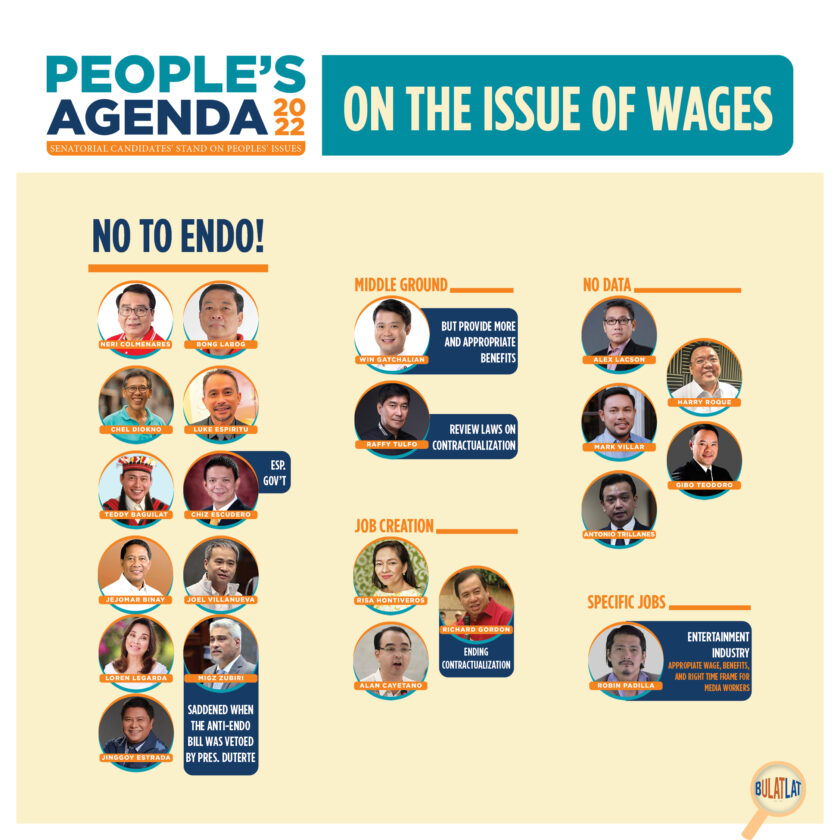 For Diokno, he said that the regional wage boards have pegged the minimum wage towards the poverty threshold rather than the actual cost of living. This wage, he added in a 2018 interview, will allow workers and their families to live a decent life.

“This is wrong and unjust. We want our workers not only to survive but to escape poverty,” he said.

Both Labog and Espiritu, on the other hand, emphasized how the national minimum wage is long overdue. Espiritu, however, said that the wage increase is unrealistic, with both government and big businesses saying that they will lose profit.

Binay urged the Regional Wage Boards to immediately probe and resolve the petitions for wage hikes, saying that “the sooner these petitions are addressed, the earlier we can provide relief for minimum wage earners.”

Gatchalian emphasized in 2016 that wage hikes “be high enough to help families escape from poverty traps.” Padilla, on the other hand, said Filipino families should at least be receiving P25,000 ($477).

PDP-Laban senatorial bet Teodoro said he is for localized pay because there are “different situations” in the provinces.

There are other senatorial candidates who offer alternative mechanisms other than wage hikes. Francis Escudero said Richard Gordon both proposing to ease tax, while Harry Roque is pushing for a 10-hour, four-day workweek.

On job creation and ending contractualization 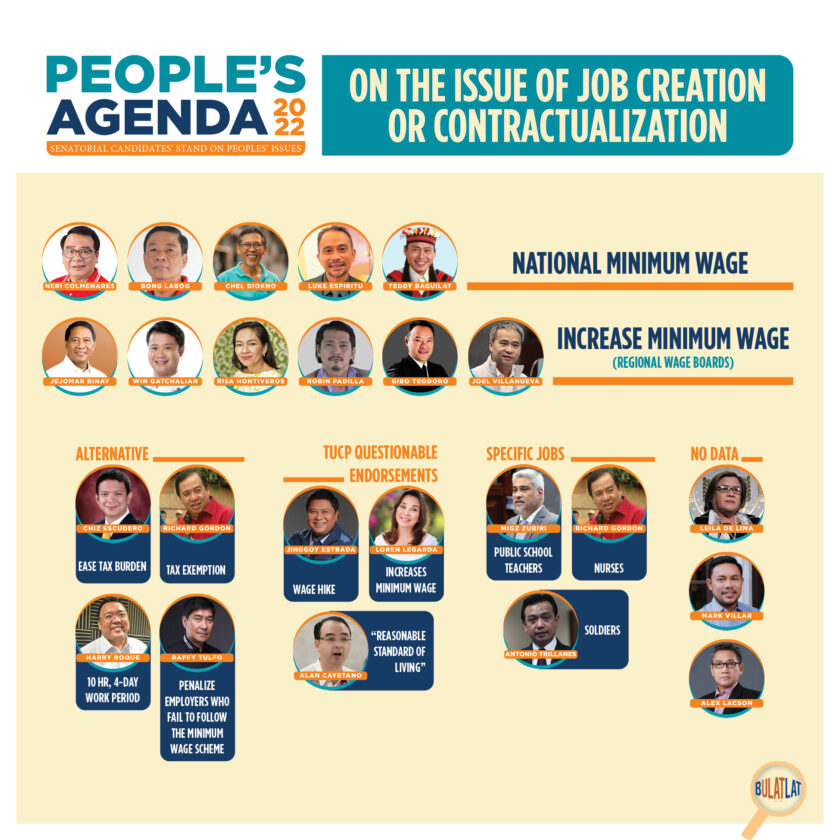 Almost all the select candidates said they are supporting the calls to end contractualization and are pushing for job creation.

Colmenares said that ending contractualization should be a part of the COVID-19 response.

Diokno emphasized that it is important for the government to distinguish between legitimate outsourcing and those who abuse the labor laws through contractualization. Escudero, on the other hand, said in 2018 that the government is the leading violator of security of tenure among workers.

Espiritu said that recruitment agencies should be abolished due to their “parasitic” relationship with the employees and that workers should be directly hired by the employers.

“The lack of security of tenure makes contractual work not decent as this is where the future of their families rely on. We want contractualization to end,” labor rights leader Labog said.

Four of the select senatoriables – Legarda, Hontiveros, Villanueva, and Zubiri – co-authored the Senate Bill No. 1826, which seeks to end contractualization. This bill, however, was vetoed by President Duterte in 2019.

There is no available data for Lacson, Roque, Trillanes, Teodoro, and Villar regarding their stand on contractualization. (JJE, RVO)