By ALESSANDRA MERCADO and TISA NACIONAL
With reports from Dawn Cecilia Peña
Bulatlat.com

MANILA – “The most productive in our history.”

Under the new Marcos regime, how will the country pay for its debts? Ibon Foundation, an independent think tank, said that government officials are eyeing higher taxes in the coming years.

“The proposed tax measures will be mainly borne by poor and ordinary Filipinos still recovering from the government’s excessive lockdowns and stingy subsidies,” Ibon said in its report. 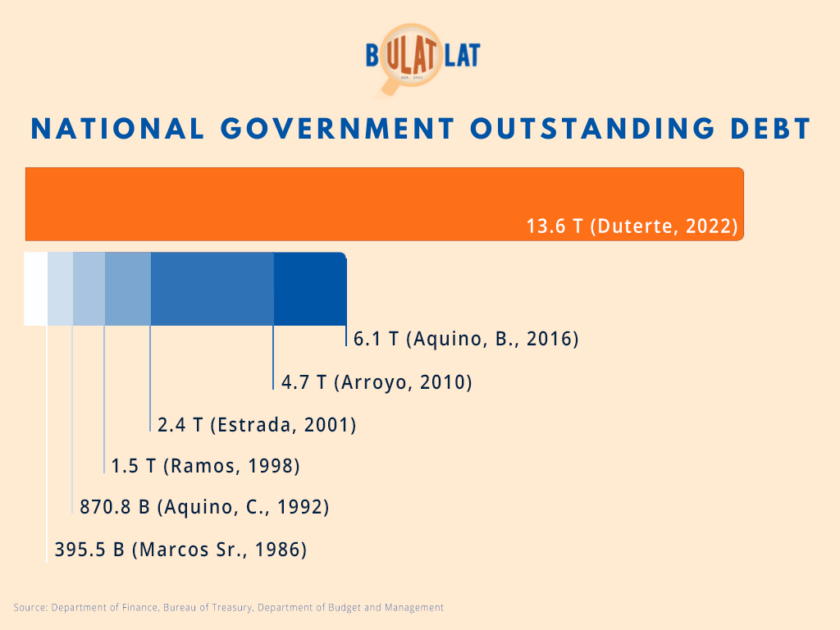 The Duterte administration left behind a national debt twice as large as the combined national debts incurred by six former Philippine presidents during their terms of office which amount to PHP5.94 trillion ($107.9 billion).

The former administration’s economic managers pointed to the COVID-19 pandemic as the main cause behind the country’s debts. In 2020, the Philippine government began accumulating funds for its pandemic response through loans, raking up a total of P5.3 trillion ($96.2 billion) worth of gross borrowings by 2021 from multilateral agencies and other countries.

However, research group Ibon Foundation said that the Philippine government only allotted a measly P570 billion ($10.3 billion) for its COVID-19 response as of September 2021.

Read via our mirror sites: ‘Irregularities in pandemic response fund deprived people of right to health care, right to live’

“[The government] did not change its priorities despite urgent pandemic needs and, if anything, only used COVID-19 response to cover up massive borrowings for continued debt servicing and infrastructure,” Ibon said, adding that the accumulated national debt was due to the Duterte administration’s misplaced priorities. 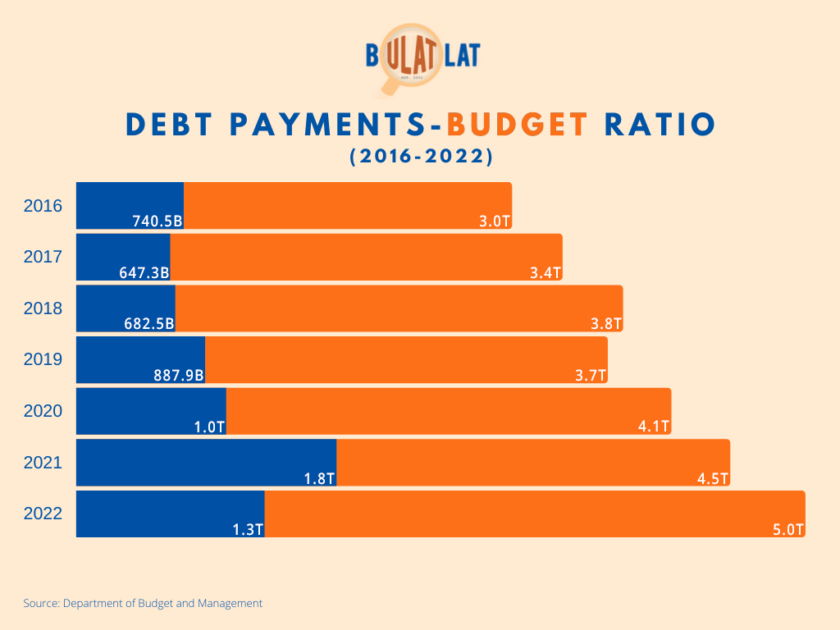 The government’s single-biggest expense for its pandemic response cost P234 billion ($4.2 billion) and was allocated for emergency cash assistance, which Ibon described as “grossly lacking.”

While the country marked an 8.3 percent growth in its gross domestic product (GDP) in the first quarter of 2022, other official data show that the country is far from recovering from the impact of the COVID-19 pandemic.

“This confirms that economic recovery is stumbling and more aggressive solutions such as real fiscal stimulus are urgently needed,” Ibon said, debunking claims of post-pandemic recovery from government officials.

The country’s poverty incidence also rose from 21.1 percent in 2018 to 23.7 percent – meaning that 26.14 million Filipinos living below the poverty line – in the first semester of 2021, according to the PSA’s report released in December 2021. This is exacerbated by increasing oil prices and a 6.1 percent inflation rate reported in June 2022, the highest recorded since December 2018.

However, despite the country’s struggle to recover from the pandemic, Marcos Jr. vowed to continue the Build Build Build program.

Are tax hikes the answer?

For the new administration, the Department of Finance (DOF) proposed higher taxes to address the country’s growing debt even if allies of Marcos Jr. said that he is not prioritizing them.

“We are still in a pandemic, millions lost their job and livelihood, and workers’ wages are still very low. If taxes are raised, how far will our depressing wages go? The government really does not care about the plight of the people,” Kilusang Mayo Uno Secretary General Jerome Adonis said.

Kadamay secretary general Mimi Doringo told Bulatlat that if the government needs to generate additional funds, bigger taxes should instead be imposed on the rich and powerful. “They should spare ordinary folk from this and instead use the funds to provide them with aid, and social services like housing, among others.” (JJE, DAA)