MANILA — Frequent flooding has been a long-standing problem for Tatalon village in Quezon City, a community that sits along San Juan River, one of the main river systems in the Philippine capital.

“It has always been like this. Two hours of rain and we already expect the flood to enter our house,” said Venus Peralta, a resident of this community and the leader of their urban poor group Pinagkaisang Lakas ng Mamamayan(PLM)- Tatalon.

Outside their community, flood fences were put to supposedly protect their homes. But Peralta said these barely protected their low-lying community.

Quezon City is among the world’s largest cities that will be exposed to severe flooding and drought, according to the 2022 Water Safe Cities report of the Institute for Environmental Studies (IVM) & Climate Adaptation Services (CAS). The study added that Quezon City will have a 50 to 100 percent increase in storm flooding by 2050. 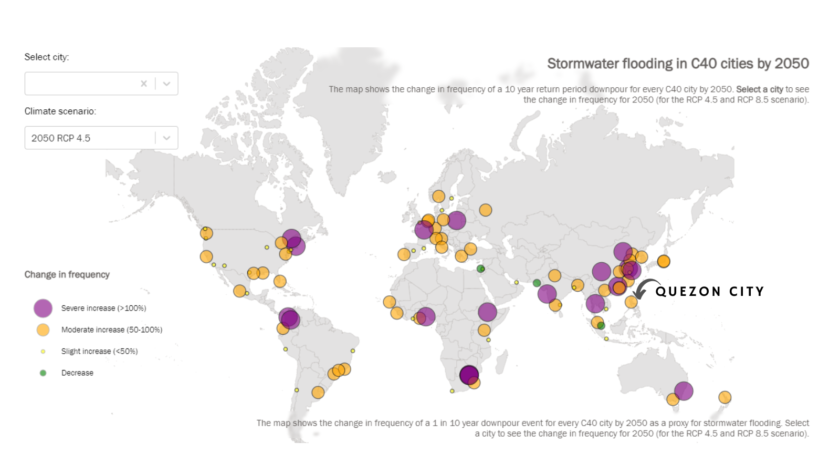 Last July 16, about a hundred families residing in Tatalon and two other nearby villages were rescued from a 10-foot flooding as the San Juan River rose due to the heavy downpour. The flash flood gave residents very little time to save their belongings, they said.

For Marivic Dizon, born and raised in Tatalon, the recent flooding brought back memories of the flooding brought by Typhoon Ondoy (international name Ketsana) back in 2009 that reached the roofs of two-storey houses in the community.

Dizon then had just given birth and she was boarded in a boat along with elderly and children. In the middle of their evacuation, the boat was stuck in between rusty roofs, forcing their evacuers to kick their boat to move.

To see their community submerged once again in deep flood waters worries her, especially of diseases that residents may get, such as leptospirosis.

“Our wish is a decent house in a safe place where flood waters could not enter our homes anymore,” she said.

Another resident, Myrna Casiao, 74, said she had to store her goods for her store in a higher place to prevent these from being swept away by the rampaging flood. As she evacuated, she, herself, was nearly swept away by the flood where she dodged debris such as wood and trash along the way.

“It was a good thing that I was able to hold on to a street post,” Casiao said.

Two days after the flooding struck their community, residents of Tatalon held a protest action in front of the Department of Social Welfare and Development (DSWD)’s office in Batasan to ask for aid due them.

Protesting residents said they were then referred to the local government of Quezon City. Peralta added that they were “arrogantly dismissed” by the staff they talked to and were told to just wait in the evacuation center for help.

“What we need are immediate actions and less of dialogues. The people are hungry,” Peralta said.

Apart from the aid, residents are hoping that the government will also provide them with a long-term solution, including being relocated to a safer place. This the Quezon City local government is also considering.

In a statement sent to Bulatlat, Kadamay secretary general Mimi Domingo said the community is considered a “danger zone” and that relocation may be the best option for residents. However, she said that the relocation site should still be within the city and not away from the livelihoods of residents.

Peralta, for her part, reiterated that their demands is part of their right to express their grievances.

“We [PLM and the residence of Brgy. Tatalon] are together, we are always helping each other in everyday struggles,” Peralta said. (RTS, JJE)