You Are Here: Home → 2022 → August → 6 → Use of own language facilitates better learning, Filipino academics assert

Use of own language facilitates better learning, Filipino academics assert 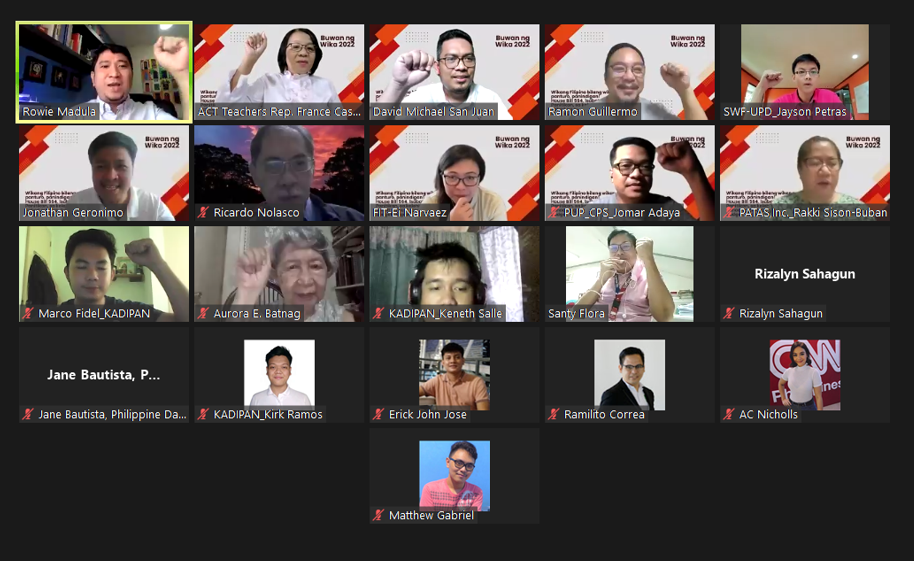 MANILA – Will the use of English as a medium of instruction improve the education of students in the Philippines?

For members of the academe, the answer is always a no.

In an online media forum last August 3, Wednesday, organized by Tanggol Wika, Filipino professors explained that the use of the Filipino language as a medium of instruction facilitates better learning.

David Michael San Juan, Tanggol Wika convenor, said that based on the 2017-2018 National Achievement Test results, students got higher scores in Filipino compared to English. He added that the majority of the top 20 countries who participated in the Programme for International Student Assessment (PISA) in 2018 also used non-English language for the test.

It is not true that English is the basis for learning science and math. In fact, in PISA 2018, many countries got high scores because they used their own language in exams and instruction,” San Juan said in Filipino.

He also cited data from the Education First English Proficiency Index 2021 showing that the majority of the 13 countries with very high proficiency in English do not use English as the main medium of instruction.

San Juan urged the government to look into the data, studies and statistics as well as the reality. “The reality is that our own language is the most effective language to be used in teaching any subject,” he said.

San Juan pointed out that “learning both languages is possible and the springboard to learn foreign languages, not only English, is to first study our own language.”

“The reason why our fellow Filipinos are having difficulty speaking English is because they fail to first learn their own language,” he explained.

Dr. Ricardo Nolasco, former chairperson of Komisyon sa Wikang Filipino, said that based on the results of Trends in International Mathematics and Science Study (TIMMS), students who spoke the language of the test at home had higher achievement in mathematics and science. The same goes to schools where the medium of instruction used is their home language.

“Let us remember that we failed in the 2019 TIMMS findings. But in these findings, those who failed are those who speak English in their household,” Nolasco said. “The argument that children will learn in their subjects if they use English is very simplistic.”

Other than language, Nolasco also cited other factors that aggravate the already poor state of education in the country.

In the Programme for International Student Assessment (PISA) in 2018, the Philippines had the lowest score in reading comprehension and second-lowest in mathematics and science.

PISA is a triennial survey of 15-year old students around the world that assesses key knowledge and skills.

Nolasco said PISA noted that the Philippines has the lowest expenditure per student among all PISA-participating countries. It said that it is 90 percent lower than the Organisation for Economic Co-operation and Development (OECD) average.

While students in the Dominican Republic scored at the same level or lower than students in the Philippines, its expenditure per student was three times higher than that of the Philippines, the PISA Country Note read. Indonesia’s expenditure per student is also 83 percent lower than the OECD average but based on the 2018 PISA, Indonesian students outperformed Filipino students.

Nolasco said that based on the PISA results, some 94 percent of the Filipino students speak another language at home more than the test language which is English.

The feeling of not being safe in the school environment contributes to the low score of the students, he said. Nolasco said 65 percent of Filipino students said they experienced bullying in school.

Nolasco also cited the lack of preparedness of the teachers especially in implementing the K to 12 curriculum.

But he reiterated that the teachers are not the ones to be blamed on this because training them is the state’s responsibility.

Ferdinand Marcos Jr. has made clear his preference for the English language as a medium of instruction in schools.

In his State of the Nation Address, Marcos Jr. said that he wanted to maintain what he called as an advantage of the Filipinos as foreign employers favor hiring Filipinos because they can speak the language.

But in his discussion, University of the Philippines-Diliman professor Dr. Ramon Guillermo asserted that using the English language as a medium of instruction will not result in the development of the country.

Guillermo discussed how in 1974, during the administration of the late dictator Ferdinand Marcos Sr., labor export policy was implemented.

Through this policy, he said, Marcos Sr. was able to prevent the massive discontentment of the people due to unemployment; part of the academe sector also left the country that led to the brain drain which is still happening up to now; and the government earned through the remittances of the overseas Filipinos workers who are sending money to their families in the country.

Since then, Guillermo said, the focus of public, private, and vocational-technical education is on exporting Filipino workers.

Because of the export of Filipino labor, the Filipino becomes the main product that needs to be globally competitive. Some of the characteristics of a competitive worker are cheap and docile, and English-speaking.

The labor export policy has definitely stunted the use of Filipino as a medium of instruction, Guillermo said.
Guillermo said that it is true that Filipinos need to study English and other international languages, but, he said, the proper learning of English is not obtained by using English as a medium of instruction that can only cause confusion and misunderstanding.

“What we need in order for our country to develop is to effectively learn our own language. We will not develop if we merely learn a foreign language prematurely just so we would become the slaves of others,” Guillermo said in Filipino. (RTS, RVO)