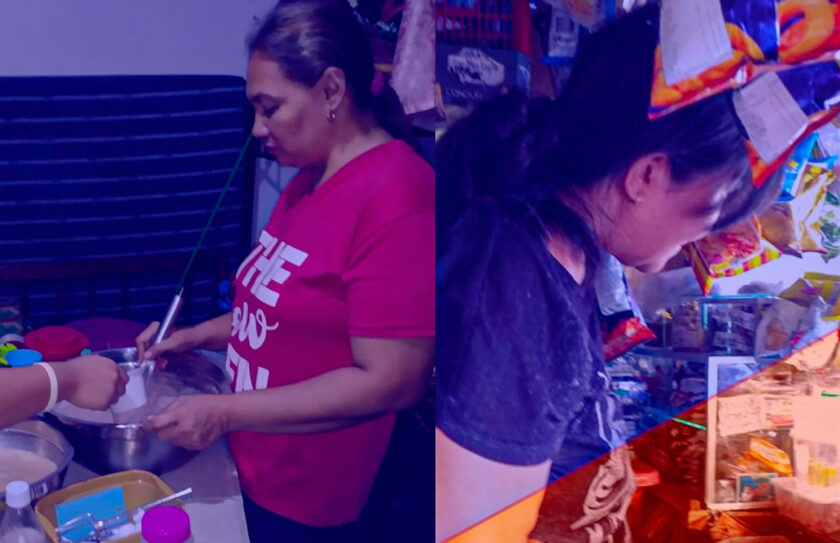 Contrary to government claims, financial aid is still needed as ordinary folk struggle with the increasing prices of everything.

MANILA – As a 42-year-old mother, Jovilyn Culladilia’s daily income as a baker of personalized cakes and pastries is barely enough to provide for her two children.

“P18 per meal? That is not enough,” Culladilia told Bulatlat, reacting to a government claim that a person needs only US$0.25 per meal to be not considered food poor.

As it stands, half of her daily income amounting to P400 ($7.14) already goes to their daily food, while the rest are for utilities, school needs and other expenses. Her husband sometimes works in construction, bringing a monthly average of about $50 to their household income.

She said her family is already below the country’s current food threshold. The government uses the latter to measure extreme or subsistence poverty, looking into the required minimum income to meet basic food needs and nutritional requirements to remain economically and socially productive.

According to a recent government report, nearly 3.5 million families (or 17.5 million individuals, assuming an average family size of five) who are below the poverty threshold of P12,030 ($214.72) per month for a family of five. This accounts for 18 percent of the current population.

The economic managers of the Marcos Jr. administration claimed that the country has reached its full economic recovery and that including financial aid in the 2023 budget will be a “waste of funds.”

Culladilia, however, begged to disagree. “Perhaps (the government’s food threshold) is only possible if you have other means of getting food, like a backyard vegetable garden. Otherwise, you would need to buy everything, including malunggay leaves. That P18 is not enough,” she said in Filipino, adding that the cost of one egg is already P12.

These days, Antonia Delos Santos, 39, a local store owner in Pasig City said that she is having a hard time providing nutritious food for her own family. “We usually resort to eating canned goods and instant noodles. We only get to eat nutritious food when there is aid or if we get good sales,” she said.

Providing healthy meals to her family is important for Santos. Aside from her children, she is also caring for her husband who has been suffering from a lung disease for almost 10 years now.

The Delos Santos family is among the 18.8 million households in the country without savings which independent think tank Ibon Foundation said is an “indirect indicator of weak household incomes.”

The number of families without savings has increased to 18.7 million in the previous quarter (or about 68.9 percent of total families).

“Whatever is left for today’s sales is added to our budget the next day,” she said.

The increasing prices of food have also taken a toll on the household of Maricar Salvador, 32, who has been working in the business process outsourcing industry for the past five years. Of her monthly take-home pay of P24,000 ($427), she allocates at least 60 percent of it or about P15,000 ($267) for food.

But even with Salvador’s combined income with her husband, she said it is still not enough.

In the past few months, the Philippine government’s own data showed that prices of essentials have increased, including food, oil, and electricity. Last year’s inflation rate was pegged at 3.9 percent, higher than the 2.6 percent average among Southeast Asian countries.

“If you were to ask me, our budget for food is still not enough. We still have other expenses. The government can easily suggest how families should budget their expenses, but in the end it would still be up to us to put food on the table,” Salvador said.

Apart from food, electricity and transportation costs are also on the rise.

Aimy Montano-Steckle, an administrative support staff in Pasig City, said that these also take a big chunk of her monthly household income. Out of her P12,000 ($213) income every month, P1,000 ($17) is allocated to water and electric bills and P500 ($9) is for everyday fare to go to work.

She has resorted to cooking just eggs and processed food, adding that she can only buy nutritious food like vegetables and fish if she is able to save some money.

In a recent statement, Ibon Foundation assailed the defunding of social protection “even if millions still suffer the aftershocks of the Duterte government’s harsh pandemic lockdowns and as economic rebound fades.”

Among the government agencies that will receive big budget cuts, as pointed out by Ibon Foundation, are the National Commission of Senior Citizens (by 52.3 percent) and the National Anti-Poverty Commission (by 17.2 percent).

Such budget cuts, IBON added, “shows the Marcos Jr administration’s insensitivity to millions of Filipinos in distress and its deliberate intent to ignore the country’s glaring problems.” (JJE, DAA)