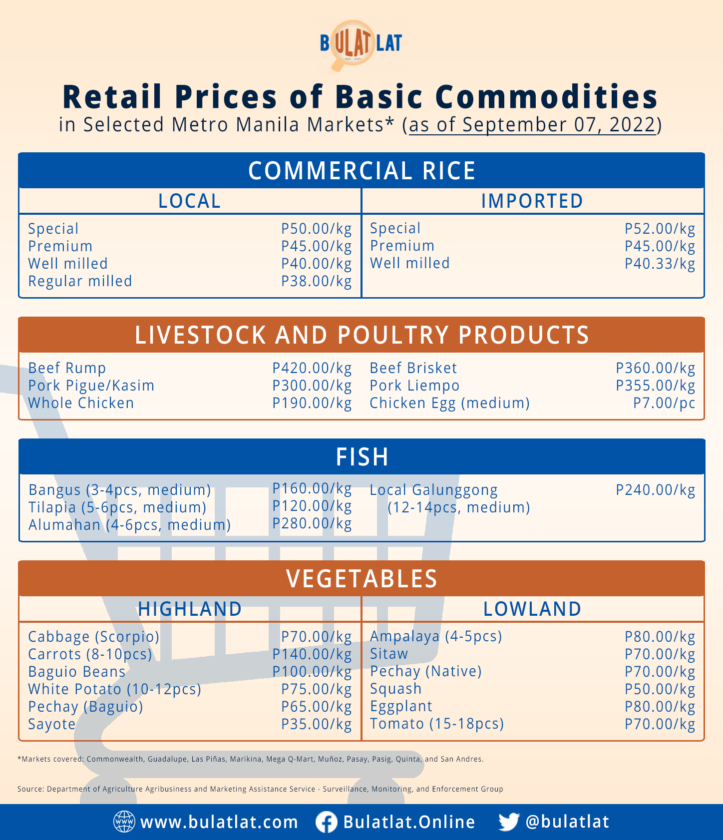 MANILA – Food producers lamented the insufficient funding for agriculture as they continue to endure the global food crisis, the incessant increase in the cost of production, and the devastating effects of extreme weather events.

Kilusang Magbubukid ng Pilipinas Chairman Emeritus Rafael Mariano said in a statement, “Despite the 39.2 percent increase of the agricultural sector in the proposed budget, Marcos’ real priorities are clear: debt servicing, infrastructure with an emphasis on transportation, defense funding, and other sources for plunder.”

“While this amount increased, it is still far from what is needed to truly develop the state of Philippine agriculture and the sectors depending on it,” added Mariano, “his decision to give priority to debt servicing and infrastructure at this period of worsening food crisis is quite telling of what’s in store for Filipinos in the next six years.”

Budget must trickle down to producers

Farmers demanded that a P15,000 ($263) production subsidy and aid per farmers be included in the 2023 national budget as it will help ease the financial woes endured by farmers reeling from the constant rising costs of production.

“There is money for agriculture but this does not reach the farmers. [The] Agriculture budget must trickle down to farmers and food producers,” said Mariano.

KMP highlighted the delay of cash distribution under the Rice Farmers Financial Assistance (RFFA) program, where rice farmers registered with the Registry System for Basic Sectors in Agriculture (RSBSA) tilling two hectares or less will receive P5,000 ($88) as compensation for their projected income loss due to the drop of palay price. The P8.04 billion subsidy ($140.8 million) for 1.59 million farmers remains unreleased, along with the P1 billion RFFA support fund for 181,000 farmers nationwide for 2021.

“Do not treat farmers as beggars who need to plead for what is due to them. We demand the Department of Agriculture and Landbank to immediately release the P5,000 ($88) cash aid for 1.6 million farmer-beneficiaries of the RFFA program,” Mariano added.

“Vegetable farmers also use fuel for land preparation, irrigation, and transportation costs. The fertilizer that they consume is mostly fuel-based. They also need cash aid and subsidies,” said the peasant leader.

“Significant, tangible aid is necessary to bolster local food production during this period of worsening inflation and food crisis,” he added.

Pamalakaya asserted that the P6.2 billion ($108.6 million) to be allocated to the Bureau of Fisheries and Aquatic Resources (BFAR) and the P489.6 million ($8.6 million) allotted to the Fuel Assistance to Fisherfolk program as “insufficient”.

The group said in a statement that its proposed P15,000 ($263) production subsidy will only cover 32,600 out of the two million registered fisherfolk nationwide from BFAR’s fuel assistance.

“No one is exempted from the oil price increases, so we are calling for the department to increase the budget for fuel assistance and other stimulus programs to boost agriculture and fisheries production,” said Pamalakaya National Chairperson Fernando Hicap.

The group said that the budget for other programs which are “irrelevant” to the development of municipal fisheries should be re-channeled to livelihood and subsidies for small fishers.
“BFAR should give priority to small-scale fishers who until now have not recovered after the consecutive price hikes of oil and other commodities,” Hicap added.

Farmers’ losses due to liberalization bigger than DA budget

KMP and Anakpawis also appealed to increase the public funding of agriculture to at least 10 percent of the P5.3 trillion ($92.9 billion) 2023 budget.

The DA imposed budget cuts on several important items including the Irrigation Network Service (INS), the Provision of Agricultural Equipment and Facilities (PAEF) on the National Rice Program, and the Extension Support, Education, and Training Services budget for the National Livestock Program decreased by a combined amount of P993 million ($17.4 million).

“These are crucial projects, activities, and programs related to the recovery of the slumped rice and livestock sectors. Why impose these budget cuts?” asked Mariano, also a former agrarian reform secretary.

The group lamented at the glaring lack of budget for the coconut industry and the development of local fertilizers.

Meanwhile, Anakpawis Partylist president Ariel Casilao noted that rice farmers lost P165 billion ($2.9 billion) from 2019 to 2020 due to the implementation of the Rice Liberalization Law.

“As it is, the government can no longer regain this loss through budgeting. If agricultural policies remain to be like this, together with the lack of production subsidy, it is clear that a lower budget will not solve the worsening food and agriculture crisis.”

“These were exacerbated by the rise in the cost of fuel used in irrigation and farm equipment which the KMP estimated at an additional P8,000 ($140),” Casilao lamented.

In addition to underfunding of crucial programs, KMP raised concerns on the enormous budget proposal for the Department of Agrarian Reform’s Support to Parceliation of Land Individual Titles (SPLIT). The P24.62 billion ($431.4 million) endeavor will be implemented from 2020 to 2024, and will be funded mostly by conditional loans from the World Bank, with counterpart funds from the Philippine government.

“This project will only allow the institutionalization of awarded lands as collateral assets. Likewise, it will also further undermine the demand of farmers for genuine land reform,” said KMP chairperson Danilo Ramos.

SPLIT’s budget for 2023 will increase by 58 percent to P6.14 billion ($107.6 million) from its current allocation of P2.55 billion ($44.7 million), this makes up almost 40 percent of DAR’s proposed budget for next year. It will reportedly cover 1.38 million hectares of land with Collective Certificate of Land Ownership Awards (CLOAs) for parcelization.

The farmers’ group is also seeking a national dialogue with new agrarian reform secretary Conrad Estrella regarding the resolution of long-standing land disputes in the country.

“We are open and willing to discuss with Secretary Estrella our proposals for a genuine agrarian reform program including the proposal for a moratorium on land-use conversion and condonation of land amortization payments. We are keeping our lines open and we hope Secretary Estrella will listen to what farmers have to say,” said the former DAR chief.

Anakpawis’ Casilao explained that the worsening food and agricultural crisis in the country, brought about by the absence of farmers’ security of tenure on lands and liberalization, enabled the domination of the private sector including big traders and cartels.

“The non-intervention of the state is a part of the [liberalization] policy, which allows market forces to dictate retail prices. Therefore, the allocated funds for the DA and its attached agencies have no intention to resolve the crisis in the country and achieve self-sufficiency, because of the interests of the private sector, foreign monopolies, and big traders,” criticized Casilao.
KMP, on the other hand, said the government must put prime focus on agriculture, food production, and in providing significant production aid to farmers and fisherfolk to tide over the food crisis.

“[We] will further scrutinize the proposed 2023 budget for agriculture and submit its counter-proposals.” (JJE, RTS)