Land and Life: The Tumandok People of Panay and their Struggle 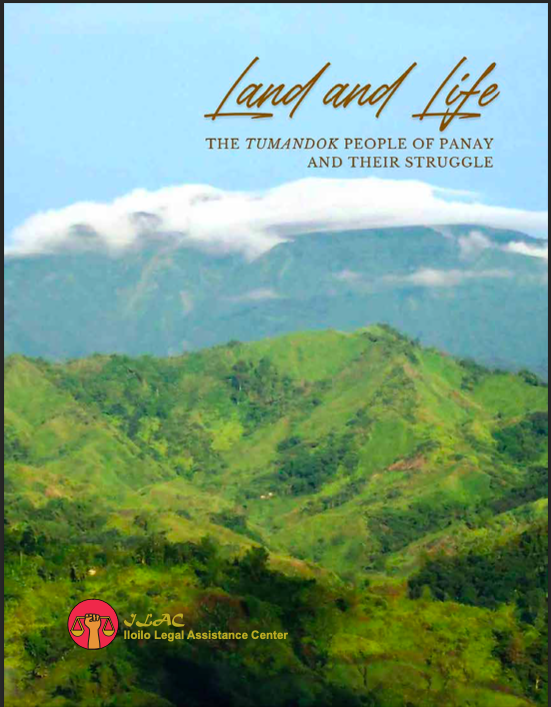 A review-commentary
Published by the Iloilo Legal Assistance Center (ILAC)
Pp. 52 including front and back covers

The photo-essay is made up of three parts. The first part features the material and intangible artifacts of Panay’s indigenous people, the Tumandok, such as their everyday language, epic chants, ritual performances, their traditional attire and practical household wares.

As markers of difference these artifacts demarcate their identity from anthropological perspective; yet unwittingly, nay, unfortunately they became ingredients of their exoticization. To view Tumandok as exotic people is to view them as unfamiliar and unusual, of exciting differance, Jacques Derida’s proliferation of significations, vis-à-vis those in the mainstream. Tumandok’s pudong headgear, binanog dance, tubok embroidery, epic chanting and tales of binukot are deracinated from original context now to be displayed as objects of dillentante gaze. Alas, the current exoticization of the Tumandok is the exploitative attention they had not asked for nor they unjustly deserved.

Insightful is Ms. Karlyn Subaldo, a student who wrote her undergraduate thesis-essay, “A Reading of Alicia Magos’ Collection of Epics of the Tumandok of Central Panay” (2016). I paraphrase her: “On reviving Tumandok culture, the researchers should have focused on helping them fight to protect their ancestral domain, gain access to basic social services because as long as they are secure their community will thrive without fear for the loss of lives and oral literature.”

The second part reveals the evolved social fabric of the Tumandok through the decades of struggle. Where earlier they chiefly relied on kinship system as vessel of survival, now they had formed organizations that cut across families and clans to protect their land and life.

In early 1960s, F. Landa Jocano had ethnographically noted the lineament of Tumandok social fabric anchored as it was on ego-orientation within the wider network of blood and marriage filiations. And the human body is paradigmatic, hence their organic terms, “apo-sa-sabak”, “apo-sa-tuhod”, etc. to trace genealogical connections.

What layered over the aforementioned fabric now are the various socio-political organizations they formed as response to actual threats by forces of the state’s development aggression. The land hectarage of their ancestral domain is sliced-off by the neighboring military reservation, Camp Peralta of the Army’s 3rd Infantry Division. Their flowing river source is dammed by the Jalaur River Multipurpose Project, Stage 2. They now lost their agricultural land, residence lots, sacred burial grounds and ritual sites. To survive they took on the collective courage by self-organizing around existential causes.

Since 1996 until 2019, a total of 11 Tumandok People’s Assemblies were held where experiences were shared, delightful presentations were showcased and urgent resolutions were passed addressing their pleas to protect their land and life. However often the urgencies fell on deaf ears and blind eyes of politicians, public servants and government agencies. Hence the militancy of Tumandok demands and actions are in order.

Apart from assemblies, TUMANDUK organization was formed in 1996, Tumandok nga Mangunguma nga Nagapangapin sa Duta kag Kabuhi to consolidate their expressions of urgent demands and advocacies. It is a level of unity above and beyond narrow clannish primordial loyalties. In opposing the construction of the mega dam, the Tumandok networked with solidarity group Jalaur River for the People’s Movement (JRPM) to gain wide support from dwellers of cities in the plain. Tumandok are now internationally and nationally famous as brave oppositors of the Philippine state’s deathly mega projects.

The third and last part covered in pages 31 to 52 catalogues crimes against the Tumandok: the 1995 bombing exercises that wounded children and adults, the 2020 arrests of vocal community members and the dawn time raid that killed nine of their leaders on the 30th of December of the said year.

It is foolhardy to assume that such bloody “one-time-big-time” killing was not connected with the Tumandok active opposition against the construction of the Jalaur mega dam. Silencing, eliminating the oppositions paves the easy way for the 11.2 billions of pesos project to proceed unimpeded. Under President Duterte, the co-presence of people’s resistance and political “tokhang” or massacre makes macabre causal link real.

If put together as bits and parts of a large puzzle, all the repressions, oppressions, marginalizations and directed violations of Tumandok rights as indigenous people the picture amount to ethnocide. There exists a deliberate and systematic destruction of their life and culture as vulnerable people. And state forces are active agents that violate the 2007 United Nations Declaration on the Rights of Indigenous Peoples, all 7 articles, Part 1. Culpability is clearly identifiable.

The future collection of payments for injustices they suffered rests on the able hands of the Tumandok. Their activistic identify constituted through protracted struggles is a work in progress. As of now they write petitions, they lobby, they held dialogues to be heard, to be listened to. But reaching the point of futility, it may be asked: who are morally ascendant to restrain them from elevating higher their level of resistance? None in my opinion. The international examples are unimpeachable: the Zapatistas in Chiapas, Mexico and the Adivasis of Dantewara, India. Indigenous people’s resistance offers realizable hope as fellow traveler Arundhati Roy personally attested.

The Tumandok of Panay are not naïve, they soon realize that their survival as a people is link with the victory of the broad national democratic yearning.

*The author is a faculty member of the Division of Social Sciences, University of the Philippines Visayas Miag-ao Campus