MANILA — In a back-to-back protest, progressive groups gathered in Makati City to call for the abolition of the National Task Force to End Local Communist Armed Conflict (NTF-ELCAC), the state’s counterinsurgency arm that continuously red tags labor workers and unions, as it sets to meet with the International Labour Organization (ILO) today, January 24.

The ILO launched their four-day High-Level Tripartite Mission (HLTM) yesterday, Jan. 23, in the Philippines with the goal of investigating cases of labor rights violations against Filipino workers.

The first protest was an all-women action led by the Women Workers United, a broad alliance of women from labor movements and advocates in the Philippines. Women workers and allies from various organizations joined the protest action.

Women Workers United urged the ILO-HLTM delegates to defend the rights and freedoms of working women, and to hold the NTF-ELCAC and all perpetrators of violations of the right to organize and for freedom to associate accountable.

Leticia Castillo, spokesperson for the Liga ng mga Manggagawa ng Valenzuela City, expressed her outrage with how the NTF-ELCAC treats progressive workers like them who are only fighting for a decent and living wage, as well as the freedom to exercise their labor rights. She stated that she is a victim of police harassment, surveillance, and red tagging since 2019.

Kilusang Mayo Uno (KMU) International Officer Kara Taggaoa also shared her experience as a victim of fabricated cases. Taggaoa and a jeepney driver are currently facing a case of direct assault and robbery by a police officer.

“Those who are capable of hurting others and stealing are inside the Makati Diamond Residences. They are talking with and are spreading lies in front of the representatives of different organizations to the Philippines. They are lying about the violence that they have caused and the abuses against workers,” Taggaoa said, pointing to the NTF-ELCAC.

Aside from the abolition of the NTF-ELCAC, the demonstrators also demanded the release of abducted labor organizers. KMU’s Elizabeth ‘Loi’ Magbanua and colleague Ador Juat were abducted by state forces in May 2022, and Dyan Gumanao of the Alliance of Concerned Teachers Region VII Union along with development worker Armand Dayoha were abducted by police forces on January 10. Gumanao and Dayoha were found six days later, but Magbunua is still missing as of this writing. 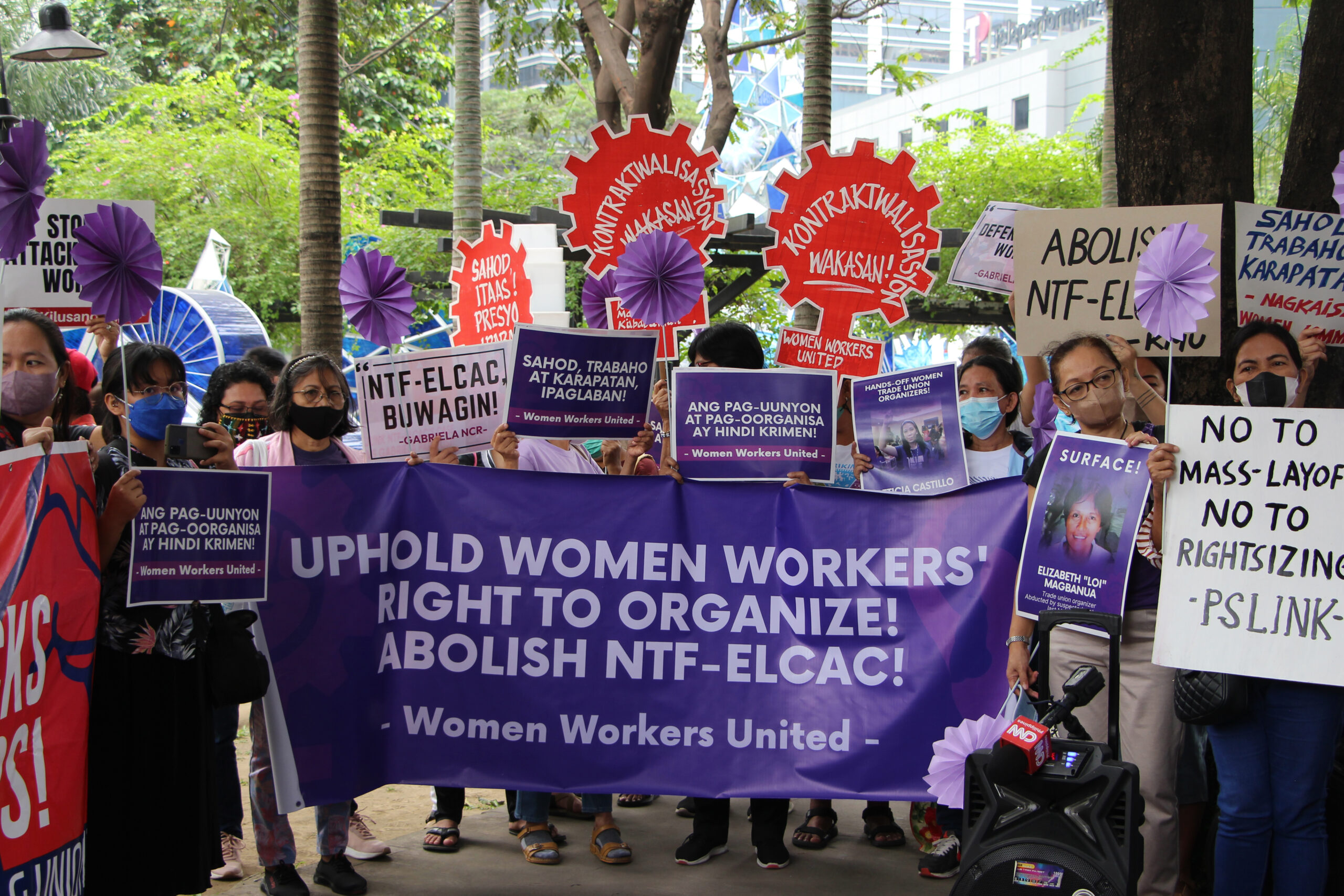 The groups then proceeded to the Makati Diamond Residences, where the dialogue is taking place, to join another protest, led by the Bagong Alyansang Makabayan (BAYAN).

Agricultural workers were not immune to NTF-ELCAC’s harassment and HR violations.

According to John Milton ‘Butch’ Lozande of the National Federation of Sugar Workers (NFSW) from Negros Island, 16 sugar workers and members of their organization were killed in their province and no justice has been served.

“That is why we are calling for the abolition of NTF-ELCAC and for all laws like EO 70 and the Anti-Terror Law to be trashed,” Lozande added.

EO 70, or Executive Order No. 70, institutionalizes the whole-of-nation approach by establishing the NTF-ELCAC, which is supposed to bring peace to conflict-affected and vulnerable areas, but the opposite is actually happening. This situation is almost the same for the ATL, where the law is weaponized by the government.

The labor groups said that they will continue to fight for justice for all the victims of state oppression and repression even after the High Level Tripartite Mission. (RTS)