A former chief of the Department of Environment and Natural Resources (DENR), who is also one of President Gloria Macapagal-Arroyo’s most trusted men, is one of the directors of a big mining company that operates in a number of provinces, among them Bukidnon, which is one of the provinces where several indigenous-peoples’ communities are suffering under a reign of terror perpetrated by the military and paramilitary groups.

END_OF_DOCUMENT_TOKEN_TO_BE_REPLACED 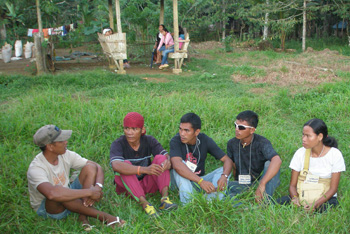 By ALEXANDER MARTIN REMOLLINO
As foreign mining investments continue to encroach into Lumad lands in Northern Mindanao, the military, through its Oplan Bantay Laya, intensifies its campaign to stifle local opposition to these companies. A fact-finding mission found that so far this year, 13 Lumads have been summarily executed while more were tortured and harassed by soldiers and fellow Lumads co-opted by the military.