Holding a multi-colored bayong (plastic market bag), Mang Pering, a retired sugar farm worker, looked half-scared and half-exited. Inside his bayong was a panti (fish net made of nylon) and some dry clothes. He is on his way to the nearby river where he hopes to get some fish so his family would have something to eat for the day. But before he left, he said he only had one wish: “Sana hindi ako mahuli ng gwardya” (I hope the guard won’t catch me).

HACIENDA LUISITA — Perfecto Versola, 67, is a retired sugar farm worker of Hacienda Luisita, Inc. (HLI). He stopped working in 1998 at 60, the retirement age for sugar farm workers in the hacienda (or cash crop plantation).

Mang Pering to friends, Versola started working in the hacienda in 1958 at 21, only a year after Jose Cojuangco, Sr. acquired the Central Azucarera de Tarlac from its Spanish owners, the Compania General de Tabacos de Filipinas or Tabacalera in 1957. Cojuangco Sr. was the father of former President Corazon Aquino under whose administration the Comprehensive Agrarian Reform Program (CARP) was enacted. 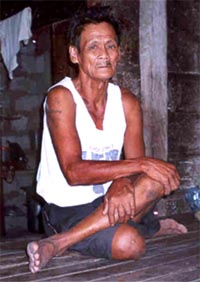 “In the old days, this hacienda was a big forest,” Mang (old man) Pering said in Filipino. “I remember my grandfather cutting down the trees and cleaning this area up and soon helped develop the hacienda into a sugar plantation.”

In 1988 when shares of stocks were distributed by the HLI to its workers, Mang Pering was one of the beneficiaries. Until today, he keeps in his closet about 20 stock certificates. But Mang Pering says that of late, he has not benefited from the stock certificates. “Kahit kailan hindi ko naman naramdaman na isa ako sa may-ari ng hacienda” (I’ve never felt being a stockholder of the hacienda), he said.

In 1990, Mang Pering was asked to cut some trees in the backyard of the Cojuangcos. Even without being paid, he obliged as he said it was his way of returning the favor to the Cojuangcos as one of their workers for more than three decades.

While doing this two years later, Mang Pering accidentally slipped and fell to the ground hitting his left shoulder. He suffered a fractured bone in his shoulder and underwent surgery at the hacienda’s St. Martin de Porres Hospital which was also owned and operated by the Cojuangcos.

In 1998, Mang Pering received PhP15,000 as retirement pay. This amount, however, was not enough to pay his accumulated hospitalization bills.

It took several more years for Mang Pering’s daughter, Flor Sibayan, to be able to pay his debts through deductions from her salary as a sugar farm worker.

But Flor complains of the very low pay she and her family get from the hacienda management. “Nung kasalukuyang binabayaran namin ang utang ni Tatay sa ospital halos wala nang natitira sa sweldo namin” (While we were paying father’s hospital bills almost nothing was left from our wages), she said.

She says their situation is worse today.

While the government allows a minimum wage of Php230 a day for agricultural workers, the sugar farm workers in HLI receive a gross amount of only PhP194.50. “Pero kung ibabawas ang mga utang namin, ang natitra na lang ay Php9.50” (Minus the money we pay for our loans, what’s left is only PhP9.50), she says.

Sugar farm workers in Hacienda Luisita get a monthly supply of 10 kilos of sugar which they pay for PhP239. “We should pay this amount within a month, if not, we won’t be able to get our supply for the next month,” Flor also says.

They also have a daily educational allowance of PhP9.50 per child and a school bus allowance of PhP32 a month. However, the actual weekly transportation expenses for a child is already PhP62.

“The Cojuangcos may claim that they give us allowances but based on the high cost of living, these are not enough,” Celia Gutierrez, a sugar farm worker and a mother of one, said. “Madalas sabihin ng mga Cojuangco na libre ang bigas, ang asukal… pero walang libre dito. Lahat binabayaran namin” (The Cojuangcos always say they give free rice and sugar. But there’s nothing free here, everything is bought), she said.