State of the People 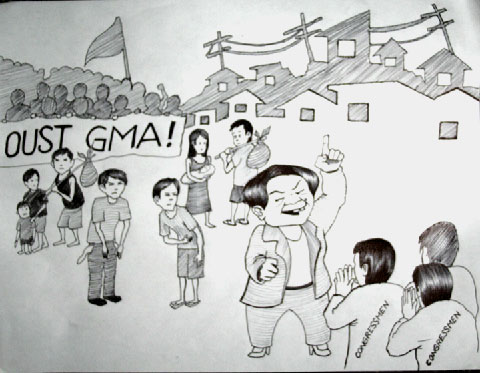 State of the People. Mrs. Gloria Macapagal-Arroyo may well be expected to give this year a State of the Nation Address (SoNA) that is merely an extended version of her “Ramdam ang Kaunlaran” (Progress is Felt) slogan. Only her sycophants in Congress will applaud her speech because the people, who are bearing the brunt of the socio-economic crisis, feel sharply the pain in their stomachs and the emptiness of their pockets. The people may be expected to be infinitely more receptive to the activist groups’ version of the SoNA, as it would be the one that would accurately reflect their conditions.
By FLON FAURILLO
(Bulatlat.com)