By virtue of a 1991 Deed of Transfer between the DND and the DAR, some 6,000 peasants and other residents in a 3,100-hectare area within a military reservation in Nueva Ecija should have acquired ownership of the land they live on and till. But they have not, and now they face the possibility of being driven away from the area.

Melencio Rioroso, 76, and Francisco Espiritu Apellido, 60, are two of the peasants farming and residing in Barangay (village) San Isidro in Laur, Nueva Ecija. That village is part of a 3,100-hectare area within the Fort Magsaysay Military Reservation (FMMR) that is now the subject of a brewing land dispute.

For as long as he can remember, it is the land in this village that has provided him and his family of eight with their daily needs. “Pagtatanim at pagbebenta ng gulay ang ikinabubuhay namin” (We earn our keep by planting and selling vegetables), he said.

He received a Certificate of Land Ownership Award (CLOA) for his one-hectare land in Brgy. San Isidro just three years ago.

Rioroso, meanwhile, has lived in at least three Nueva Ecija towns in the last three decades. Originally from Pantabangan, he and his family of eight moved to Palayan City in 1980 after acquiring six hectares of land there from a certain Armando Sabado. Two years later he and his wife, together with five of their children, moved to Laur, where they have lived since then.

In 1995, the Riorosos received four CLOAs for their land, which all in all covers 10 hectares.

Apellido and Rioroso are two of the over 1,000 peasants in the contested 3,100-hectare area within the FMMR who have received CLOAs since 1991. Right now, they live in fear of losing their lands to the military. 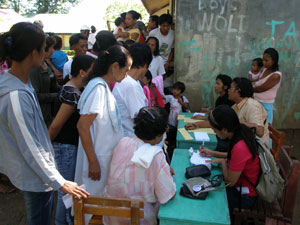 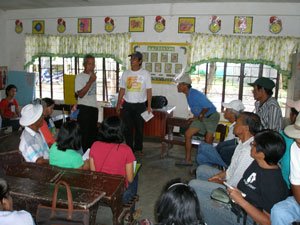 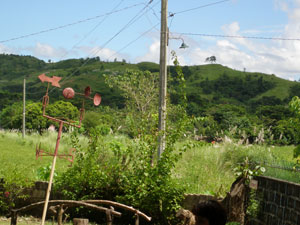 These farmers in Laur, Nueva Ecija, try to keep their land.

People have been settling in the 73,000-hectare area now known as the FMMR since the early 1950s.

In 1956, then President Ramon Magsaysay declared the area as a military reservation through Presidential Proclamation No. 237. The Armed Forces of the Philippines (AFP) uses 15,000 of the 73,000 hectares as a camp and training ground.

On Nov. 5, 1991, through a Deed of Transfer between then Defense Secretary Renato de Villa and then Agrarian Reform Secretary Benjamin Leung, the Aquino government allotted 3,100 hectares of the FMMR to landless peasants, as well as to families evacuating from Pampanga following the eruption of Mt. Pinatubo.

By virtue of this Deed of Transfer, over a thousand peasants and other residents within the 3,100-hectare contested area have received CLOAs, but many more still have yet to acquire these.

And now, those who do have CLOAs – like Apellido and Rioroso – face the possibility of losing these. The Philippine Army’s 7th Infantry Division (ID), which is stationed at Fort Magsaysay, is hell-bent on driving them away from the land that should have been turned over to them nearly 17 years ago.

This request is contained in a June 24 letter by then Maj. Gen. Ralph Villanueva (recently promoted), commanding officer of the 7th ID, to a Mr. Orlando Tumacay, Provincial Agrarian Reform Officer of Nueva Ecija. Part of the letter reads thus:

This pertains to the dialogue conducted on 17 June 2008 at Hqs, 7ID regarding 3,100-hectare land within the Fort Magsaysay Military Reservation which was ceded by the DND in favor of DAR through a Deed of Transfer executed on 05 November 1991. Also, the latest dialogue dealing on said issue transpired on 25 (sic) June 2008 at the same venue attended by DENR and DAR personnel from Cabanatuan City.

Based on the background investigation conducted by the Division Judge Advocate of this Command, said area is subject to a case filed by the Department of Environment and Natural Resources (DENR) against the Department of Agrarian Reform (DAR). This case is still pending at the Court of Appeals.

In this regard, may I request that all issuances of titles within the 3,100 hectares of the Fort Magsaysay Military Reservation be deferred pending the litigation of the case filed at the Court of Appeals. I would like to further request that all Certificates of Land Ownership Award (CLOAs) be revoked (emphasis supplied – AMR) upon the affirmation of the Secretary of Justice on our stand that the Deed of Transfer regarding the 3,100 hectares is null and void since only another Presidential Proclamation can declare such land use.

The Division Judge Advocate referred to in Villanueva’s letter is Col. Hermilo Barrios – the same “Colonel Barrios” who, Brgy. San Isidro residents told the fact-finding mission, has been going around the 3,100-hectare contested area, summoning them and the residents of the other villages to “meetings” and “assuring” them that their lands would not be taken.

Apellido and Rioroso have both lived and earned their living in Brgy. San Isidro for a good part of their lives, and cannot imagine themselves in any other place.

“Malalaman ko na lang siguro” (I’ll probably just find out later), Apellido said when asked where he will go if he and his family are driven away from the land.