Dancing the Cha-Cha over Money 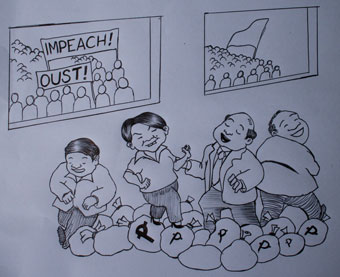 After the House of Representatives’ Committee on Justice junked the latest impeachment complaint against President Gloria Macapagal-Arroyo, pro-administration congressmen are now dancing the cha-cha. This is allegedly because money flowed again to buy more time for the Arroyo government from now till beyond 2010 through the junking of the complaint and amending the Constitution.