Laid off OFWs in Taiwan Duped by Malacañang

Meanwhile, the so-called ‘assistance package’ given to the OFWs actually contained brochures of the Social Security System (SSS), PhilHealth, flyers from the Technical Education and Skills Development Authority (TESDA) and referrals to the Philippine Overseas Employment Agency (POEA).

May Ruiz, another OFW from Taiwan lamented, “Dismayado kami sa naabutan namin sa OWWA lalo na sa Malacañang. Ang ine-expect po namin ay immediate action na ibibigay nila sa amin at hindi itong laman ng bayong na puro certificate, kasi pag- uwi po namin sa pamilya namin, hindi po ito magta-transform into cold cash para ipambili namin ng pagkain para sa pamilya namin.” (We are dismayed at what happened to us at the OWWA and especially at Malacañang. What we were expecting is immediate action to help us and not this bag, which is full of certificates. Because when we go home to our families, these could not be converted into cash to buy food for our families.) 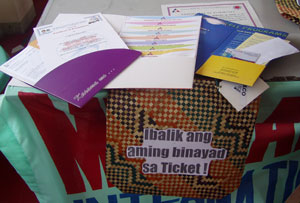 Assistance package’ inside “Bayong” given by Press. Arroyo at Malacañang during the visit of Retrenched overseas Filipino workers from Taiwan. (Photo by Angie de Lara)

Ruiz, 23, was an employee of the Advanced Semiconductor Engineering in Taiwan. She is the breadwinner of the family.

A mother of another retrenched OFW who is sill in Taiwan, Annie Redelicia, 52, said that her daughter Reggie left for Taiwan on October 6 this year and lost her job as an electronics worker on November 20.

Annie said the company has ceased supplying food to her daughter since November 30. She said she does not know if her daughter has something to eat.

Annie also said that the P80,000 ($1,688) debt they had incurred from the agency continues to gain interest. By November, the money they owe has increased to P100,000 ($2,110) because of the interest. “Baka po idemanda na kami ng agency e wala po talaga kaming ibabayad sa kanila, kasi kakaalis lang po ng anak ko tapos nawalan na kaagad ng trabaho,” (The agency might sue as because we really do not have money to pay them. My daughter has just left and she is already out of work.) she said.

Elvira Dungca, 25, another OFW from Taiwan, said they were offered a ‘no work, no pay’ scheme. The company would just call them if their services are needed. She said, “Paano kami habang walang trabaho? Paano kami mabubuhay sa araw-araw?” (How would we survive while we are out of work? How would we survive each day?)