You Are Here: Home → 2009 → January → 31 → UP Faculty Regent Asked to Resign as Union Officer, Conflict of Interest or Anti-Unionism?

UP Faculty Regent Asked to Resign as Union Officer, Conflict of Interest or Anti-Unionism?

Prof. Judy Taguiwalo who was elected overwhelming by the faculty to represent them in the Board of Regents of the University of the Philippines (UP) has yet to take her oath. The reason: The Board is asking her to resign as officer of the All-UP Academic Employees Union.

Professor Judy Taguiwalo has been elected as faculty regent by an overwhelming vote of faculty members of the University of the Philippines (UP) system. At the time of her election, Taguiwalo is the national vice president for faculty of the All-UP Academic Employees Union (AUPAEU).

As faculty regent-elect, she will sit as an official member of the Board of Regents (BOR), the highest policy-making and governing body of the university.

However, on January 8, Taguiwalo had a meeting with UP President Ermelinda Roman. Citing a memorandum from Vice President for Legal Affairs Theodore Te, Roman told Taguiwalo that she could not take her oath as faculty regent if she does not resign from the AUPAEU.

In his memorandum dated January 5, 2009, Te said that Taguiwalo’s being a union official constitutes a conflict of interest with the office of the faculty regent.

Not in the rules 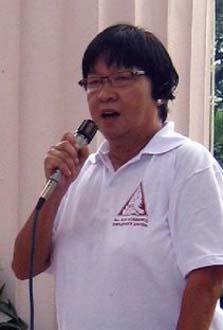 In a memorandum issued in October last year, Roman cited the qualifications for nominees for faculty regent: He/She must be a permanent faculty member of the University, and must have served the University for at least ten years as a member of the faculty.

The memorandum states further, “Not eligible for nomination are those holding administrative positions, unless he/she resigns from his/her position before the second round of nomination nor those on such leave from the university…”

Taguiwalo has been teaching social work at UP for 17 years. She is not holding any administrative position.

She argued, “I believe that the imposition of new qualifications or requirements after the fact of my election over and above the existing rules for the selection of the faculty regent which was approved by the Board of Regents (shortly before the procedure itself) constitutes a grave violation of due process.”

No conflict of interest

Taguiwalo said further she could not understand what conflict of interest Te is referring to. Taguiwalo said as faculty-regent, she must defend the rights and welfare of all faculty members at all times. She said that the BOR is the court of last appeal for issues on tenure, renewal, disciplinary action and other concerns of faculty members.

She said, “It may even be the case that many of the votes I had gained were precisely due to the appreciation and value given by faculty members to my union work and affiliation.”

Taguiwalo quoted Professor Harry Roque of the College of Law in her letter to the BOR dated January 20. “The provision on conflict of interest in RA 6713 cited by Te pertains only to business activities. Union activities are evidently quite different from business activities which are pursued for personal gain or profit. The Higher Education Modernization Act or RA 8292 also provides for the automatic membership of the President of the Faculty Association in the governing body of state universities and colleges.”