Chief Justice Reynato Puno said that the Supreme Court will consider expanding the writ of amparo, dealing with harassment suits, setting up of small claims courts, among others, to protect the economic, social and cultural rights of the poor.

In his speech at the forum titled, “Kabuhayan, Karapatan, Katarungan,” (Livelihood, Rights, Justice) organized by the Bagong Alyansang Makabayan (Bayan) and the National Union of People’s Lawyers (NUPL), August 28, Puno said that the writ of amparo may be expanded to protect economic, social and cultural rights of the poor.

The writ of amparo was promulgated by the High Court on October 24, 2007 to provide legal remedy for victims of extrajudicial killings and enforced disappearances. 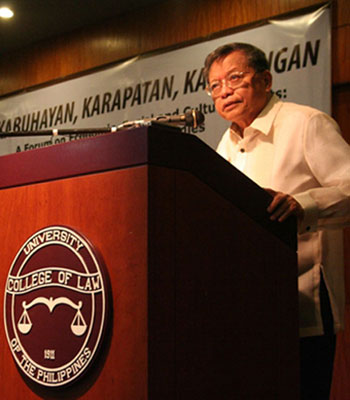 The chief justice said that the writ of amparo, for instance, could be used as a protection against demolition of urban poor communities.

The group complained that Regional Trial Courts (RTCs) always decide for the demolition of their communities. Kadamay’s Ed Lecson, said they had no one to turn to during demolitions.

Puno also vowed to consider the proposal of the NUPL regarding the Strategic Lawsuits Against Public Participation (SLAPP).

Matibag said that victims of SLAPP cases are burdened and threatened with costly and long litigation, danyos perwisyo (payment of damages) and detention.

Roger Soluta, KMU deputy secretary general, also opposed the criminalization of labor disputes. He said that workers, especially those who are on strike, are charged with various common crimes.