Three activists have joined the progressive party-list bloc in Congress as they took their oath this morning before Supreme Court Justice Antonio Carpio.

By virtue of the recent Supreme Court decision on the party-list system, lawyer Neri Javier Colmenares of Bayan Muna, Joel Maglunsod of Anakpawis and Raymond Palatino of Kabataan party have been proclaimed as members of the House of Representatives.

Colmenares himself argued before the Supreme Court the unconstitutionality of the “First Party Rule” that disenfranchised scores of winning party-list organizations in the 2007 elections.

Colmenares was among the youngest political detainees under martial law, and is currently the secretary-general of the National Union of People’s Lawyers (NUPL). 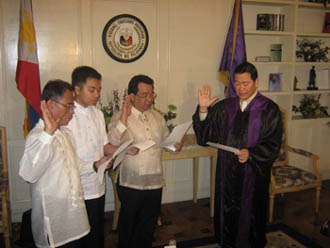 “I am honored to represent Bayan Muna’s constituents in Congress. I vow to use all legal means available to the party and the people to advance our national interests and to stop attempts of President Gloria Macapagal-Arroyo to perpetuate her illegitimate rule via Charter Change,” Colmenares said in a statement.

The activist lawyer founded the Counsels for the Defense of Liberties (CODAL) that criticized the calibrated preemptive response and the issuance of Proclamation 1017.

The group also figured prominently in the drafting and filing of impeachment cases against Arroyo.

As NUPL secretary general, Colmenares has been active in defending human rights, utilizing the writ of amparo and writ of habeas data in the fight against impunity.

Meanwhile, in his message to his fellow youth, Palatino said, “[T]he SC Resolution, in effect, has once again marked the youth’s rightful place in history by granting the first ever youth sectoral representation in the House of Representatives.”

“This is truly a historical event and we share this resounding victory to all Filipino youth who voted for and supported Kabataan Party-list. We are overwhelmed but more than ready to take on the task and challenge of being the sole voice of the youth in Congress,” Palatino added.

Kabataan Party-list, the largest youth party in the country, represented the youth sector in the 2007 elections. In 2004, the group ran under its previous name, Anak ng Bayan.

Palatino further said, “While we recognize that one year is too short a time in the House of Representatives, we pledge to work tenfold to efficiently and effectively bring our new brand of politics to Philippine government.”

The youth party-list group vowed to submit bills concerning youth empowerment in governance, employment for the 900,000 new graduates, and tuition fee hike moratorium, among others.