MANILA — In his follow-up report to the United Nations Human Rights Council, Prof. Philip Alston, the UN’s special rapporteur on extrajudicial, summary or arbitrary executions, said the Philippine government has not eliminated extrajudicial killings from its counterinsurgency operations.

Alston visited the country in February 2007 to investigate the spate of killings in the country. A year after, he released his findings and recommendations in April 2008.

In his report to the UNHRC dated April 29, 2009, Alston said that the ‘most important shortcoming has been the Government’s failure to institutionalize or implement the many necessary reforms that have been identified.’

Alston’s primary recommendation is the elimination of extrajudicial executions from counterinsurgency operations.

The special rapporteur noted that, “The AFP has not changed its counterinsurgency techniques in such a way as to eliminate the likelihood that leftist activists will be killed.”

Alston said he is not aware of any public statement by President Gloria Macapagal-Arroyo instructing the security forces to stop the targeting and public labeling of political and civil society organizations as fronts for New People’s Army (NPA) operations. 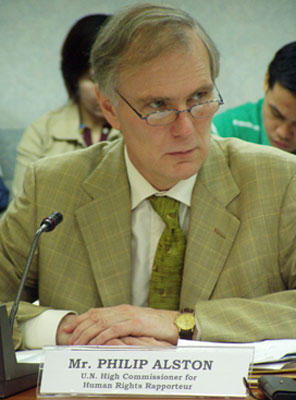 In fact, Alston said, Arroyo’s order that the Armed Forces of the Philippines [AFP] should end the insurgency “once and for all” by 2010 has been used to justify vilification of civil society organizations.

While some public statements have been made, Alston said he has not received evidence of any institutional reforms by the Philippine government designed to prevent the targeting and execution of civil society activists.

While Alston noted the decrease in the number of extrajudicial executions of members of civil society organizations, he said that “too many cases continue to be reported and far too little accountability has been achieved for the perpetrators.”

Alston also recommended that the principle of command responsibility must be a basis for criminal liability of perpetrators.

The UN rapporteur said that while the AFP indicated that the principle of command responsibility had been integrated into AFP policy, the details of any such policy statement have not been made public.

“Reports of the proposed appointment of former General [Jovito] Palparan to the Drug Enforcement Board suggest that command responsibility is not a high priority for the current Administration,” Alston asserted.