Ursua said the victim decided to come out in the open as part of her healing process and recovery.

Vanessa sought the help of Gabriela and Ursua, who served as the counsel of Subic rape victim “Nicole.”

De Jesus, of Gabriela, said that regardless of Vanessa’s decision not to file a case in court, “exposing the shamelessness and the violent culture among US troops is just as important. As far as the victim is concerned, this is not an isolated case.”

Ursua said many other rape victims of American soldiers would not dare come out because of what happened to “Nicole.”

In fact, she said, one of the considerations of Vanessa was the case of “Nicole.” “She saw how the government and the justice system treated Nicole.”

According to the court, “Nicole” was raped by Lance Corporal Daniel Smith on Nov. 1, 2005. The Makati City Regional Trial Court, in early December 2006, convicted Smith, who was in the country as a participant to the Balikatan military exercises. 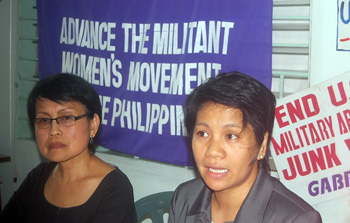 The judge initially ordered Smith’s incarceration at the Makati City Jail pending his imprisonment at the National Bilibid Prison in Muntinlupa City. However, on Dec. 29, 2006, he was transferred to a detention facility at the US Embassy in Manila under what is now known as the Romulo-Kenney Agreement.

On Feb. 11, the Supreme Court ruled that the Romulo-Kenney Agreement is not in accordance with the Visiting Forces Agreement. The High Court ordered the transfer of Smith to a detention facility under Philippine jurisdiction. On April 23, however, the Court of Appeals overturned the lower court’s decision acquitting Smith of rape.

Since the reversal of the conviction, the government Solicitor General has asked the Supreme Court to dismiss all cases pertaining to Smith, including the petition questioning the constitutionality of the VFA.

The United States government has long maintained that it would do whatever it can to keep its troops out of the jurisdiction of other governments.

“The government has been consistent about Nicole,” Ursua said. “They did not help her and even took back her initial victory. We cannot blame Vanessa if she won’t file a case against her rapist.”

De Jesus said the latest rape incident only shows that “the abuses [of US troops] will continue as long as the VFA is in effect.”

Ursua reiterated their demand to junk the VFA.

“The VFA has spawned so many problems, from rape to corruption, to human rights abuses. It is high time that the agreement be exposed for what it really is. It is a grossly one-sided pact that undermines our sovereignty and legal system,” said Renato Reyes Jr., secretary general of Bagong Alyansang Makabayan (Bayan or New Patriotic Alliance).

Reyes, in a statement, also called for the abolition of the Jusmag, describing it as “a permanent US military and intelligence outpost on Philippine soil.”

The head of the Jusmag is the representative of the commander of the US Pacific Command. “The Jusmag has long operated in the country through the cold-war relic that is the Mutual Defense Treaty. It encompasses a broad range of activities including advising the AFP, conducting joint military exercises and facilitating various forms of military assistance,” Reyes said.

De Jesus said they will mark with protests the 10th anniversary of the VFA on May 27. (Bulatlat.com)