The National Union of Journalists in the Philippines, the Center for Media Freedom and Responsibility, and the Reporters Without Borders condemned what they called as an “abomination,” the military’s Order of Battle, the latest version of which included the NUJP and journalist Carlos Conde, a correspondent for the New York Times, International Herald Tribune, and GlobalPost.com.

MANILA — The National Union of Journalists of the Philippines (NUJP) is now rethinking its official position that the murder of journalists in this country is not part of official government policy.

“The NUJP reiterates that we have, so far, seen no indication that the murder of journalists in this country is part of official policy,” Jaime “Nonoy” Espina, the NUJP vice-chairman, said in a statement this week. But the discovery that the NUJP and its former secretary-general, Carlos Conde, “are considered ‘enemies of the state’ has made us think that we may have to reconsider our position.”

Espina was referring to the inclusion of Conde and the NUJP in the order of battle (OB) of the 10th Infantry Division (ID) of the Armed Forces of the Philippines (AFP).

In this “order of battle,” more than a hundred individuals – mostly leaders and members of progressive and leftist groups like Bayan, Bayan Muna, among others – are listed and classified as “organized,”
“dominated,” or “targeted.” Conde was the only individual journalist on the list, which classifies him as “targeted.” 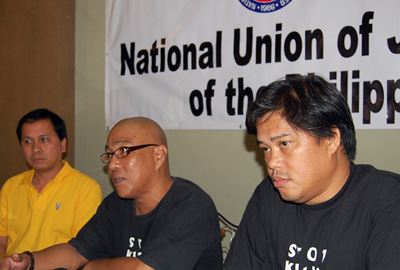 Besides the NUJP, the defunct Media Mindanao News Service is also included.

“The army considers me an enemy of the state, as the document, which shows the alleged links of these individuals with the communist movement, seems to be saying,” Conde said.

He said that an “order of battle” in the Philippines is a veritable hit list, citing the murder of peasant leader Celso Pojas last year. Pojas, like Conde, was listed in the same AFP document.

Conde works as a freelance correspondent for US-based publications, namely The New York Times, the International Herald Tribune and GlobalPost.com. He has also been contributing stories and reports
every now and then to other foreign and Philippine publications.

Conde deemed his advocacy for press freedom as the reason behind his inclusion in the military’s OB. As coordinator of the NUJP in Davao City and Southern Mindanao and eventually secretary general of the NUJP from 2004 to 2006, Conde was vocal in pressuring the Arroyo administration to stop the killings of journalists.

In a press conference May 21, Espina said this is not the first time that this has happened to members of the media.

Espina recalled that in 2005, a PowerPoint presentation titled “Knowing the Enemy” listed the NUJP and the Philippine Center for Investigative Journalism as alleged legal fronts of the Communist Party of the Philippines (CPP).

The document, which was leaked to members of the media, was believed to be the handiwork of the Intelligence Services of the Armed Forces of the Philippines (Isafp).

Espina said that, at that time, the AFP’s reaction was outright denial. In the end, however, Espina said the AFP admitted the existence of such document and was compelled to pull out the names of media organizations from the list.

Espina noted the faulty information written in recent and previous “orders of battle.” He said that Conde, for instance, has been in Manila since 2006 but the 10th ID put Conde in their list in 2007.

Espina also cited the case of Julius Mariveles, NUJP chairman in Negros Occidental. He said that Mariveles, who has been active in radio broadcasting for three years, had also been tagged as an enemy of the state.