A Peasant Leader’s Murder Shatters the ‘Peace’ in Dumaguete

Fermin Lorico was a peasant organizer and a mass leader. He had been a marked man. On Wednesday, minutes after attending the anti-charter change rally in Dumaguete City, a gunman shot him several times – the latest in a series of extrajudicial killings of progressive leaders in Negros Oriental.

CEBU CITY, Philippines — Fermin Lorico was confident that the rest of the day would end well. He just came from a successful rally on Wednesday against charter change at Quezon Park in Dumaguete City, a protest action he had helped organize. At 4 p.m., while walking with a friend, a man on a motorcycle shot him with a 9mm pistol at close range.

It was clear the assassin was a marksman. The first bullet pierced Lorico’s right cheek. Two others hit his nape. And then there he was, drooping like a drunkard, his dead body slung on the barbed-wire fence of an empty lot two blocks from the office of the Promotion of Church People’s Response, where he was going for a meeting with human-rights organizations. 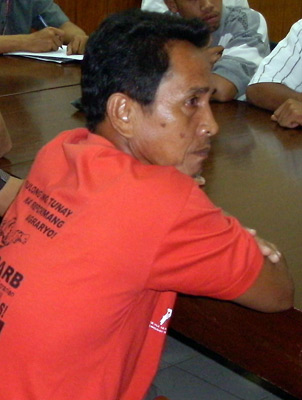 Fermin Lorico during a meeting with KMP colleagues in Manila this year. He had attended the peasant camp-out at Congress. (Photo courtesy of KMP)

Lorico, 52, died unable to see his work fulfilled. But he certainly knew that he had made a dent on the tyrant’s door.

Lorico was a peasant organizer, a mass leader and a lay minister of the Catholic Church in Bayawan City. He was a religious man, had a clean record, loved by everybody with no one holding a grudge against him. His only crime, if it was a crime, was to fight for his right and the right of the oppressed, for which he paid with his life. It was a tragedy that happened, ironically, in a place known to be the city of gentle people.

Lorico was the chairman of the Kahugpungan Alang sa Ugma sa Gagmay’ng Mag-Uuma sa Oriental Negros (Kaugmaon), a peasants’ group in Negros allied with the progressive Kilusang Magbubukid ng Pilipinas. He had been, if only for this affiliation, a marked man; several of his colleagues in the KMP and in Kaugmaon had been murdered before him. 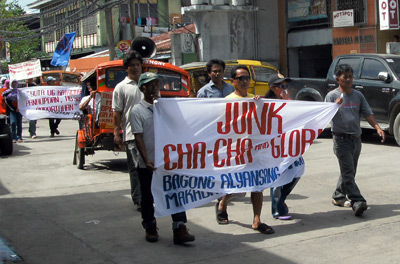 According to Juliet Ragay, spokesperson of Kaugmaon, the assailants, which they suspect to be members of the 79th IB of the Armed Forces of the Philippines, allegedly followed Lorico from the rally. After shooting Lorico in broad daylight, the gunman casually rode a waiting motorcycle and left the scene. Shocked witnesses were unable to give more details of the incident.

Arman Perez, secretary-general of Bayan Muna in Central Visayas, said this did not come as a surprise, considering the number of threats that leaders in Negros Oriental have been receiving from the 79th IB since the Philippine military tagged Negros as a priority area for Oplan Bantay Laya 2. 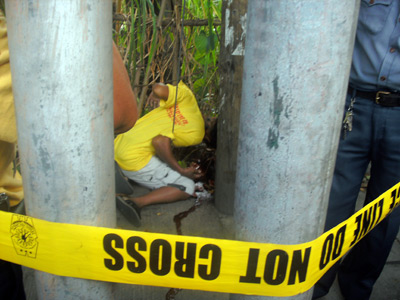 Lorico shortly after he was shot dead. (Photo courtesy of KMP)

“There had been threats by the 79th IB against progressive leaders, especially those who have proven to be effective in campaigning against OBL 2,” Perez said. “Our leaders were also effective in demanding for the pull out of the 79th IB from areas where there are chapters of Kaugmaon.”

“The killing of Lorico is a statement by state mercenaries in order to silence the leaders from criticizing the Arroyo regime,” Perez added. “But this will not be a reason for the people to be demoralized. Rather, this will inspire us to continue with our struggle.”

Lorico was the fifth Kaugmaon volunteer and the second mass leader killed in Negros Oriental this year. Last January, Julito Quirante and Ronel Raging were also killed, and in February, Francisco Julnanero, an officer of Kaugmaon, and Francisco Allegado were also murdered. 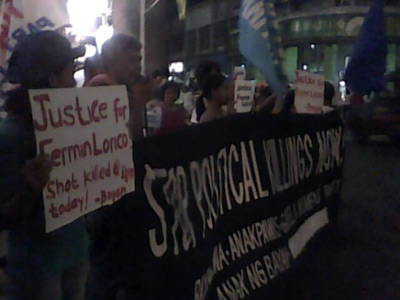 Aside from the killings, other members of Kaugman and other progressive organizations in Negros have been the target of legal actions. Kaugmaon officers Erwin Sabijon and Toto Quirante have been sued for their alleged involvement in the ambush of unarmed soldiers in Guihulngan last May.