You Are Here: Home → 2009 → June → 13 → Jeepney Drivers as Milking Cows of ‘Crocodiles’ in Arroyo Administration

Jeepney Drivers as Milking Cows of ‘Crocodiles’ in Arroyo Administration

Steep increases in fines and penalties, imposed by the Arroyo regime to make up for its chronic revenue shortfalls, are hitting jeepney drivers particularly hard. As if that were not enough, buwayas (crododiles) masquerading as traffic enforcers in colorful uniforms lurk in the streets, waiting to pounce on them at every turn.

MANILA — For a Filipino jeepney driver to get a maximum earning these days of P300 ($6.35), he needs to have strong lungs to endure the smog for eight to 12 hours while driving, a clear pair of eyes to spot passengers out of crowds, and a facility in math to calculate fares. He must have the dexterity to receive and hand out money while his eyes are on the road, what fellow drivers call diskarte.

He must also have some luck, as well as the patience to resist arguing with passengers, fellow drivers or, worse, with corrupt traffic enforcers waiting to waylay him for costly traffic and administrative infractions, real or imagined.

By the reckoning of the Pinag-isang Samahan ng Tsuper at Operator Nationwide (Piston), drivers of public utility vehicles such as jeepneys do not just cough up a great part of the passengers’ fares they collect to help keep the oil giants at the top ranking in Forbes magazine’s list of most profitable companies — they also get to be routinely scalped by corrupt these traffic enforcers, often referred to as buwayas or crocodiles. These officers are from local government units such as cities or municipalities and government agencies such as the Metro Manila Development Authority (MMDA) and Land Transportation Office (LTO). 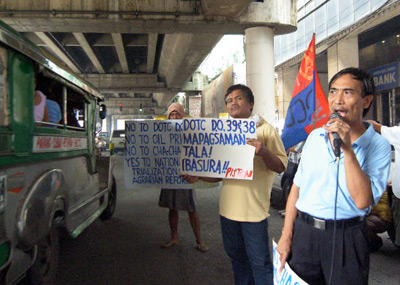 Outside Metro Manila, the active ticketing authority seems to be just the LTO, according to Piston. All their exactions bite into the drivers’ earnings as do other fees that both jeepney drivers and operators have to pay to comply with the requirements of their trade, for example the Road User’s Tax, the fees for registration and licenses, and the 12 percent Value Added Tax on petroleum products.

To defend their shrinking income and, in the case of excessive fines, their reputation, too, many jeepney drivers’ associations are striving to be just as capable of multitasking in battling the persistent oil price hikes, regressive taxes and steep rise in fines and penalties for traffic and administrative violations.

These have grave implications not only on the income of jeepney and other public utility drivers and operators, but also on the viability of the whole public transport system. Furthermore, the recent steep increase in fines, according to Piston, is not meant to solve the traffic problem – this being implemented to increase the revenue of a deficit-ridden government.

For Disciplining or for Money-making?

In August last year, the Arroyo government revived an executive order issued by former president Joseph Estrada that was used to implement increases – between 33 percent and 1,000 percent — in LTO fines and penalties for traffic and administrative violations, and a minimum of 43-percent increase in fees for acquiring and renewing licenses. The EO was implemented by a joint circular of the Department of Finance (DOF) and Department of Budget Management (DBM).

The Arroyo government jacked up the LTO fees via Department Order 39 and 38 of the Department of Transportation and Communications (DOTC) last October 2008. From experience, according to Piston, “the main targets of these spikes in fees are the drivers and operators of ‘vehicles for hire,’ meaning the jeepneys, buses, tricycles, taxis, FX’s/AUV’s and others.”

Indeed, when the government started implementing it first in the provinces early this year, the jeepney drivers and operators erupted in protests. In March, NADSU-Piston Cebu gathered 1,000 drivers in a rally in front of the LTO in Cebu City while UNDOC-Piston-Negros Occidental rallied another 1,000 drivers at the LTO office in Bacolod City.

A few days later, about 1,200 members of Transmission-Piston-Davao held a rally and transport strike in Davao. In Metro Manila, where LTO traffic enforcers are vastly outnumbered by traffic enforcers deputized by local government units and MMDA, and where the implementation of new fines was begun only recently, the result is not yet as strongly felt but drivers are already beginning to fear that corrupt enforcers might take interests in the new rates. Before they try to copy it, Piston member associations in Metro Manila have been conducting since April protest actions in different locations around the metropolis.