In Triumph’s Underwear Shops in the Philippines, a Fear of Massive Job Layoffs

Triumph, one of the world’s largest underwear makers, has been re-exporting its raw materials from the Philippines to other countries where labor cost is lower. Its workers are understandably worried. Worse, they have reason to believe that the company may end up becoming a runaway shop.

MANILA — Six months ago, hundreds of red-clad, mostly women workers of Triumph International Philippines marched to their company’s sales office and tossed bras and panties high in the air to draw attention to their demand for wage increases.

This month, the same workers have been holding a continuous picket-protest at the gate of the Triumph factory inside the Food Terminal Inc. (FTI) complex in Taguig City.

No, they are not on strike. They put up the picket to block the management’s attempts to spirit out container vans full of raw materials for bras, Triumph’s main product line. The transfer, the union said, means lesser raw materials for Triumph’s FTI factory, which in turn means lesser work for the employees. The union is concerned that this could lead to massive layoffs.

Since May 20, the union made sure its picket had at least about 20 to 50 workers, sometimes even a hundred employees, stationed at the gate of the factory’s raw-materials warehouse. When Bulatlat visited the picket line recently, the workers only had a hodgepodge of thin streamers for shelter. 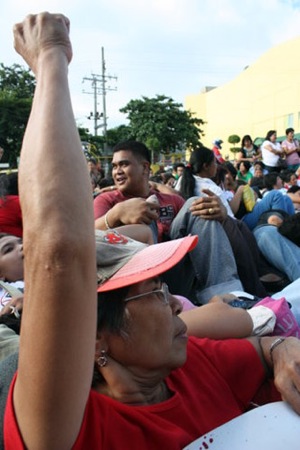 One of the women workers of Triumph at the picket line. View slideshow. (Photo courtesy of Tudla Productions)

From Day One, however, guards from the FTI and men from the Philippine National Police have repeatedly harassed the workers and thrice stormed and dismantled their picket center, each time taking away the workers’ tents, stools, chairs and banners. The workers just rebuilt their picket and increased the number of workers guarding it to forestall another forcible demolition.

Triumph is one of the world’s biggest underwear manufacturers. A multinational corporation with headquarters in Germany and Switzerland, it has manufacturing and marketing operations in 120 countries employing over 40,000. Its annual sales exceed US$1.6 billion.

In the Philippines, Triumph has two production centers, one in FTI employing about 1,200 workers. The other, Star Performance Inc. (SPI), is in nearby Veterans, also in Taguig City, with about 600 workers.

The problem began when, in May, Triumph management moved out from the FTI warehouses a van full of raw materials for bras. The van may have been sent to Triumph factories in China or Vietnam, the union said, in line with Triumph’s plan to transfer some of its manufacturing operations out of the Philippines. The union said this endangers the jobs of Triumph’s workers in the Philippines.

Since the company re-exported that van of bra materials — and had readied for re-exportation other such raw materials, now packed in Triumph’s local warehouse – the production level at Triumph’s FTI factory has decreased, said Jessica Cano, board member of the Bagong Pagkakaisa ng mga Manggagawa sa Triumph International Philippines Inc. (BPMTI or New Unity of Workers of Triumph International).

Unionists told Bulatlat that, in a company notice, Triumph International Philippines wrote about re-exporting raw materials to Triumph factories in China and Vietnam to “balance capacity and redirect materials to other Triumph production centers.”

The company cited the “widespread recession” as a reason for the move. It said the recession “has caused significant order cancellations and led to build up of large quantities of surplus material.”

That may be true, said Isabelita dela Cruz, the union president, but balancing the multinational company’s capacity need not mean endangering their jobs. “Why prioritize the other production centers at our expense,” she asked.

Triumph, she said, is doing this for profit — by using the cheapest labor they could find.

“Triumph is merely passing on to workers and their families the grim effects of the global crisis they themselves have created with their exploitative practices,” the union said in a statement in response to Triumph’s company notice.

In 2001, in response to vigorous campaigns from garments workers everywhere exposing the appalling status of mostly women workers who produce branded fashion, Triumph International issued a code of conduct for treating its labor force worldwide. The code urges its global subsidiaries, contractors, subcontractors and licensees to abide by it.