MANILA — An international association of lawyers, judges, jurists, law teachers and law students has expressed concern over the continuing deterioration of the human-rights situation in the Philippines. It also criticized the refusal of the Arroyo regime to seriously investigate and prosecute state security forces thought to be behind these abuses.

More than 200 delegates of the recently concluded 17th Congress of the International Association of Democratic Lawyers (IADL) in Vietnam unanimously adopted a two-page resolution denouncing the attacks on lawyers and judges in the Philippines and calling on the United Nations Special Rapporteur on the Independence of Lawyers and Judges to investigate the attacks.

Founded in 1947, the IADL is a worldwide association of human0rights lawyers from 100 countries and has consultative status with the United Nations’ Economic and Social Council and United Nations Educational, Scientific and Cultural Organization.

The IADL noted that more than a thousand people have fallen victims to extrajudicial killings, enforced disappearances, torture and other violations reportedly perpetrated by state security forces in response to the growing protest and resistance movement against President Arroyo for graft and corruption, electoral fraud, human-rights violations and foreign subservience. More than 40 lawyers and judges have likewise been killed. 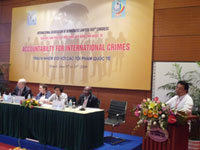 Bayan Muna Rep. Neri Javier Colmenares discusses extrajudicial killings in the Philippines before the 17th Congress of the International Association of Democratic Laywers in Hanoi. (Photo courtesy of Bayan Muna)

The National Union of Peoples’ Lawyers (NUPL) sent a nine-member delegation from the Philippines led by its secretary-general, now Bayan Muna Rep. Neri Javier Colmenares, to the IADL’s 17th Congress in Hanoi last week. The congress’s theme was “Law and Jurists in the Context of Globalization: For Peace, Development and Independence of Judicial Activities.”

Speaking at one of the plenary sessions, Colmenares said perpetrators of extrajudicial killings and enforced disappearances of lawyers, judges, activists and known oppositionists in the Philippines commit their crimes brazenly and with impunity. He cited the issuance of a PowerPoint presentation by the Armed Forces of the Philippines, which listed four known human-rights lawyers in its “order of battle” and the filing of trumped-up charges against labor lawyer Remigio Saladero Jr. and other leaders of people’s organizations.

The IADL has called for a stop to the “undemocratic, persecutory and repressive labeling of human rights defenders, political activists, and the liberation movement in the Philippines as enemies of the state or terrorists.”

The “persistent intervention” of the United States government and the deployment of US troops in the country “to aid a repressive regime” is also noted in the resolution. It says this intervention is a hindrance to achieving a just and lasting peace in the country and in resolving the roots of the armed conflict. The Philippine government has been fighting a communist guerrilla movement for more than three decades now.

The resolution also calls for the resumption of formal talks in the peace negotiation between Manila and the National Democratic Front and also urges Washington to stop providing military aid to the Arroyo regime and desist from any military intervention in the country, especially the deployment of its troops.

Also at the IADL’s 17th Congress, Belgian lawyer Jo Dereymaeker of the Progress Lawyers Network Belgium presented the report of the International Verification and Fact Finding Mission (IVFFM) on the Philippines.

Dereymaeker is part of the eight-member IVFFM organized by the Dutch Lawyers for Lawyers Foundation in the Philippines in November 2008. The mission found that lawyers and judges in the Philippines are still threatened, intimidated and killed; these atrocities prevent them from carrying out their legal profession.

In its June 4, 2009, final report entitled “The Measures Measured,” the IVFFM recommended that the Philippine government consistently condemn all forms of attacks against lawyers and judges publicly and the prosecution of all perpetrators.

The IVFFM is also concerned about the filing of fabricated charges against lawyers and activists by government prosecutors and other forms of harassment that undermine the rule of law in the Philippines. The IVFFM called on the Arroyo government to address effectively the underlying causes of the extrajudicial killings and to leave no stone unturned in investigating the serious allegations that its own military forces are involved in the killings.

The IADL’s 17th Congress also called on the Philippines to host the Fifth Conference of Lawyers in the Asia and the Pacific (Colap V) from Sept. 18 to 19, 2010.

The theme of the Colap V conference in Manila is “Human Rights, Development and the International Economic Crisis.” It will be attended by more than 200 lawyers and jurists from the region such as Japan, the Asean countries such as Vietnam and Korea, United States, Canada, Australia and the South Asian countries such as India and Pakistan.

The IADL congress also elected Filipino human-rights lawyer Edre Olalia to be a member of its bureau, the 27-member governing body of the IADL.