‘Philippine Military Has Its Own Abu Ghraib’

In protest rally in front of Nica building, human-rights groups denounce the continuing use of torture. They likewise commemorate the third year of the disappearance of UP students and activists Sherlyn Cadapan and Karen Empeño. Edita Burgos says the promotion to colonel of three officials linked to the abduction of her son Jonas will encourage more atrocities.

MANILA – Human-rights group slammed on Friday the continuing practice of torture by state security forces in the Philippines as the world commemorates the International Day in Support of Victims of Torture.

Karapatan, the human-rights group, led a picket protest in front of the National Intelligence Coordinating Agency (NICA) compound in Quezon City this morning.

“We join the world in condemning torture. We remember the sufferings inflicted on our friends Melissa [Roxas], UP students Karen Empeño and Sherlyn Cadapan, farmers Raymond and Reynaldo Manalo and many others,” said Renato M. Reyes Jr., the secretary-general of the Bagong Alyansang Makabayan, one of the groups that protested.

The Arroyo regime, Reyes said, “is responsible for these atrocities through its counter-insurgency program that targets even unarmed activists.”

Roxas, a 31-year-old Filipino-American, was allegedly abducted and tortured by suspected elements of the Philippine military last May. 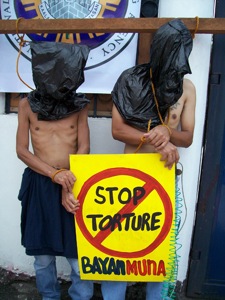 “Torture is a standard operating procedure of the military, as we have seen from the experience of those who survived and those who did not. It is quite tragic that the Arroyo regime has not at all confronted this issue and continues to deny its existence,” Reyes added.

“We have our own versions of Guantanamo and Abu Ghraib. The secret torture chambers exist inside military camps, as revealed from testimonies of survivors like Roxas and the Manalo brothers,” he said, referring to the US military facilities in Cuba and Iraq where tortures by US soldiers of suspected terrorists had been reported.

Raymond Manalo, a farmer from Bulacan, testified in court how he witnessed the torture of the two UP students and other victims of abductions. Manalo escaped after 18 months of captivity in the hands of the military in Central Luzon.

“It is a great pain to know in detail how my daughter and Karen were tortured,” Erlinda Cadapan, mother of Sherlyn, said at the rally.

In a joint statement, Hustisya! and Desaparecidos said that today also marks the third anniversary of the enforced disappearance of eight persons.

On Jan. 26, 2006, Empeño, Cadapan and Merino were abducted in Hagonoy, Bulacan. On the same day, Prudencio Calubid, a consultant for the National Democratic Front (NDF), together with his wide Cecilia Palma, niece Gloria Soco and NDF staff Ariel Beloy and Antonio Lacno were abducted in Camarines Sur. Only Lacno was able to escape.

Meanwhile, the New York Committee for Human Rights in the Philippines (NYCHRP) reiterated its call for the US Congress to cut US military aid to the Philippines and launched an online petition for the cause.

The group cited the case of Roxas, Empeño and Cadapan.