Inspired by Katrina Halili, Other Women Victims of Sex Videos Come Out

Since the sex-video scandal erupted, actress Katrina Halili has faced the crisis head-on, filed cases against Hayden Kho and, she tells Bulatlat, will pursue justice even if it destroys her career. Her courage, the women’s group Gabriela says, has inspired other victims of similar abuse.

MANILA — How do you live down a nasty record of having starred in a much sought-after sex video, one that you did not agree to film, let alone know that it was being recorded in the first place – until it became one of the Internet’s hottest downloads?

By now, most Filipinos already know how Katrina Halili has responded to that question.

Since the sex-video scandal erupted a month ago, the actress has courageously faced the crisis head-on, filing three cases against Hayden Kho, her erstwhile boyfriend and self-confessed illicit recorder of his sexual encounters not just with Katrina but, as it turned out, with other past girlfriends as well.

Supported by the progressive women’s group Gabriela, Katrina has filed a case with the Department of Justice against Kho, using provisions of Republic Act 9262 (the Anti-Violence Against Women Act), which prohibits forms of psychological abuses of and violence against women. There is, as yet, no law criminalizing production of sex videos, but Emmi De Jesus, secretary-general of Gabriela, said they are working with Gabriela Women’s Party Representatives Liza Maza and Luz Ilagan to come up with that. 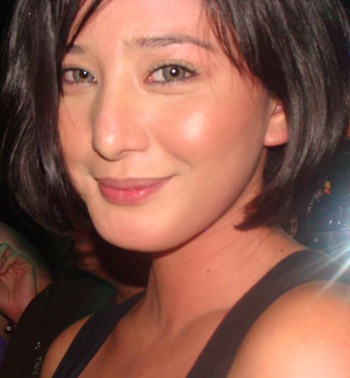 As Kho’s camp tried to defend him from the immediate social rejection of his illicit filming, Katrina slapped his mother, Irene Kho, with a libel case for her “unsavory statements” during an interview in the evening news program TV Patrol on ABS-CBN.

“They started it… We were focused on the first case (Hayden’s abuse), but they threw a lot of things at us, so now we’re charging them with libel,” Katrina told Bulatlat in an interview on Thursday.

Later, following the advice of her lawyer and her father, Katrina also filed a medical- malpractice suit against Kho, who is a doctor.

In facing the scandal head-on, Katrina has unwittingly given a face to the growing number of women-victims who are abused with the aid of modern technology.

“The proliferation of sex videos only reflects the prevalent culture that regards women lowly,” Gabriela’s de Jesus said. “In times of worsening crisis, the commodification of women as sex objects intensifies. Such abuse of women is hastened and made more widespread with the ever advancing information technology.”

De Jesus said that on top of the perennial cases of rape, sexual harassment and domestic violence, Gabriela also handles a growing number of cases of mostly teenage students who have been involved in cases similar to Katrina’s.

These videos often turn up in sidewalk stalls that sell bootleg videos, often with the words “sex scandal” appended on the title. For years now, videos of scandals that bear the name of cities (“Bacolod sex scandal”) or schools have proliferated not just on the Internet but in the streets as well.

Cases (and films) like Katrina’s are more insidious because of the betrayal surrounding its filming and distribution – women here are recorded on video and commodified in their intimate acts “in a context of a relationship,” de Jesus said. They are treated like playthings by men who had professed to love them.

When her sex films surfaced, “I found it hard to venture out, especially in the beginning,” Katrina told Bulatlat in Filipino. “I felt like everybody’s staring at me, looking down on me,” she said. The actress, who is also a commercial model and endorser, said she lost assignments and product endorsements.

But then, she realized, things like that shouldn’t be happening. “It must not happen again to anyone else. Hayden must learn that what he did is wrong, so others will not emulate him and so he couldn’t victimize others,” Katrina said.

A Gamble for Justice

A month since her case merited speeches and calls for investigation in both houses of Congress, Katrina’s case seems to drag on, mired in the seeming difficulty of investigators to trace and identify who exactly had uploaded the sex videos on the Internert.

So far, Katrina is nowhere near seeing the perpetrators arrested, tried, sentenced and punished. Meanwhile, the plot thickens as Kho and the rest of his listed accessories came out with their defense.