During the first few days of her stay in the agency, Aliyah said she heard many stories from fellow Filipino women about domestic helpers like them being raped by Abu Khalid.

“They told me there were many women who were repeatedly raped by Abu Khalid. Some were sent home but did not file charges,” Aliyah said, adding that Abu Khalid even raped a Filipino woman who was so sick she had blood in her feces.

One day in May, Aliyah was summoned by Abu Khalid to his office. Aliyah knew what could possibly happen since it was already 9 p.m., way beyond official business hours. “So before I went down to his office, I wore three layers of clothes so that he would have difficulty undressing me if he decided to rape me,” Aliyah said.

“Before he attempted to rape me, he asked me if I was contented with the sex I was having with my husband. He also asked me what positions I liked,” she said. “I asked him what he wanted from me and he told me that he would never allow me to go home until he had enjoyed himself with me.” 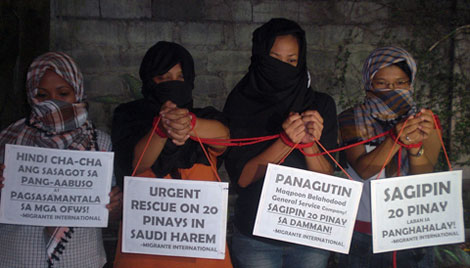 Migrante wants government to rescue the 20 OFWs behind held against their will. (Photo by Janess Ann J. Ellao / bulatlat.com)

Aliyah said Abu Khalid must have noticed her will to fight so he started to undress himself. “I immediately grabbed a pen. The first thing I wanted to do was to hit his eyes so he would not be able to see me,” Aliyah said, adding that in this encounter Abu Khalid was able to remove part of her clothing.

“He became hesitant when he noticed that I was seriously considering stabbing him with the pen so he let me go, saying that he would make sure that he would be able to ‘taste’ me before I go,” she said.

Last May 30, Aliyah said Abu Khalid summoned her again. “I was determined to fight. I told him that I would rather go out of his office dead rather than be raped by him,” she said, adding that this made him hesitate. “He was also afraid that other women would know about his evil acts. He did not know that most OFWs knew about his acts,” she added.

“He is a pig. We, the Filipinos there, never looked at him as a human being,” Aliyah said

“We had no one to go to for help because even his staff sided with him. So I was surprised to hear on June 7 from his secretary that I had a plane ticket for a flight back home that day,” she said.

Aliyah said she is worried about the 20 other Filipino women who were left in the custody of Abu Khalid. “Most of the women there have been raped repeatedly and I am sure that they are still being raped every day,” she said.

“My companions there told me that once I got out of Abu Khalid’s office, I should seek help. They told me that I was their only hope. This is why I am doing this,” Aliyah said, referring to the press conference.

Upon arriving in the Philippines, Aliyah said she only rested for a while and immediately went to Migrante to give her statement and to try to arrange a rescue operation for her companions back in Dammam.

Last June 23, a friend called Aliyah up and was crying on the phone pleading that they be rescued right away. The cellular phone her friend was using was suddenly grabbed from her. Abu Khalid was at the other end. Migrante’s Martinez, who was with Aliyah at the time the call was made, talked to him.

“He told me that I was only creating trouble and that we are making a big issue out of it,” Martinez said. “He claimed he has done nothing against the 20 women who were left in his office.”