“I told him that we already know that he attempted to rape Aliyah and when he failed to do so, he sent her home,” Martinez said.

After his conversation with Khalid, Martinez said they received a call from Migrante’s Middle East coordinator, John Monterona, who informed them about an ongoing rescue operation. Around 7 p.m. Migrante received confirmation that only two of the women were rescued, including Aliyah’s sister and another Filipino woman. “We are sad that others were left,” Martinez said.

Martinez criticized the Philippine embassy in Saudi Arabia for not doing enough to rescue the women. “The only thing that the embassy did was to call for assistance from the local police there,” Martinez said, adding that if Migrante did not call and send an email to the Philippine embassy, embassy officials would not have acted on the case. 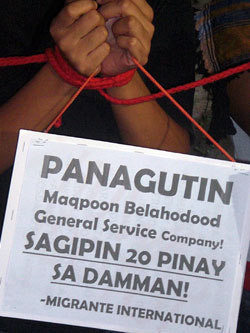 Aliyah said four rape complaints had been filed against Abu Khalid in June. “This means that they already had an idea about what was happening. But I do not understand why the government is not doing anything. They are very slow in responding to our needs. I am thankful that we were able to contact Migrante Middle East who helped us rescue the women in Abu Khalid’s office.”

Martinez said they are still waiting for the results of the medico-legal examination on the two women who were recently rescued.

Martinez added that they are asking the embassy in Saudi Arabia not to deport the victims, explaining that, based on Migrante’s experience, ‘once the victim is deported, the case filed against the suspect becomes weaker.”

Aliyah said the Arroyo administration should make sure that the OFWs welfare and safety are a priority. “We are saving the economy of the Philippines. I think that it is but right that they, too, save us from any cruelty that we face abroad,” she said.

She advised Filipinos who are planning to work abroad to make sure that they understand the contract they are being asked to sign and know the contact details of both the embassy and Migrante because, according to her, they can never be sure about their safety once they are out of the country.

Martinez urged President Arroyo “to put on hold its intensifying labor exportation program. The biggest number of OFWs leaving the country is domestic helpers and their main destination is Saudi Arabia, a country that doesn’t even recognize the right of domestic helpers to have a day off.” (Bulatlat.com)