San Mateo, the secretary-general of Piston, said oil companies, through these rollbacks, are just trying to placate and deceive organized drivers and operators even as oil products being used by largely unorganized consumers are being overpriced.

As such, leaders of Task Force July 31 said the strike and protests are not their fight alone but of the entire nation, too. “All of us are being squeezed dry by these greedy oil companies,” San Mateo said.

Since the Philippine government enacted the oil deregulation law, studies based on regulatory filings showed Shell and Petron have raked in about P70 billion ($1.5 billion) in combined net profits from 1998 to the first quarter of 2008. Their overpricing became even more obvious this year, when the global crisis and sluggish trade brought down the country’s demand for oil. Despite a 42-percent drop in sales during the first quarter of 2009, Petron, the country’s largest oil refiner with 46 percent market share, has increased its profits by 32 percent to P874 million ($18 million). 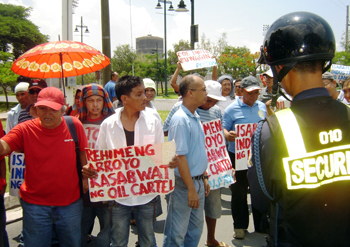 Piston members who were protesting at the DOE were initially barred by Fort Bonifacio security from proceeding to the department’s office. (Photo by Marya Salamat / bulatlat.com)

Petron’s 2008 revenue grew 27percent year-on-year. It topped all listed companies in 2008 in terms of gross revenues. Still, according to Petron president Eric Recto, “If we had been overpricing, it should have been immediately evident in extraordinarily high profit rates.”

Instead of exerting all means to guard the extraordinary pricing schemes of the oil companies, the government has been most kind to them, said Piston. The DOE-DOJ Task Force the government formed to investigate complaints on the Big Three’s price manipulation has only repeatedly absolved the oil cartel.

Also, former Solicitor General Agnes Devanadera has exposed the government’s bias for the oil companies when she asked the court to reverse its order to open the Big Three’s books of account for scrutiny.

The Task Force July 13 urged the people to contribute to the struggle to repeal the oil deregulation law and the VAT on oil. They also roundly condemned the recent suggestion of the World Bank to increase the excise tax on oil.

In 2008, the government raised an estimated $87 million ($1.8 million) from Expanded VAT largely on oil products. At present prices, every liter of diesel yields P3.50 ($0.07) of EVAT, gasoline P4.50 ($0.09). Scrapping EVAT alone would give drivers, their families and millions of commuters more significant relief than the so-called stimulus funds of the Arroyo government, said Anakpawis Congressman Joel Maglungsod.

“If Gloria Arroyo manages to hold on to power and revise the Constitution, we will all be worse off,” said Piston. “We will be plagued by more oil price increases, more taxes, more excessive fees, more penalties and fines.”

“We should not allow that to happen,” said Task Force July 13. So, amid the measly oil price rollbacks and threats from government agencies, the drivers promise to continue protesting and holding transport strikes against the oil companies’ greed and the Arroyo government’s complicity. (Bulatlat.com)