The failures of her presidency notwithstanding, Cory Aquino will be remembered for helping restore democracy in the Philippines and dismantle the vestiges of the Marcos dictatorship. When the Arroyo regime increasingly became corrupt and autocratic, she again rose to the challenge. Cory fought tyranny to the very end.

MANILA – Corazon Aquino could have just gone through the normal grieving process with her family after losing her husband Ninoy to the dark forces of the Marcos dictatorship. But she did not. Cory rose to the occasion to challenge the dictator for the presidency during the snap elections. In the process, she represented the anger of the Filipino people who were fed up with Marcos and his martial-law regime. And Cory, who was belittled by Marcos for being a “mere housewife,” defeated the dictator who was in power for 20 years and was known to be a brilliant lawyer before running for politics. When Marcos committed massive electoral fraud and refused to yield, Cory became the symbol of the “people power” uprising that ensued.

When Ferdinand Marcos was ousted from Malacañang and Cory Aquino assumed the presidency, she immediately went about dismantling the vestiges of martial law. She restored the Filipino people’s formal democratic rights, reopened the institutions of governance, released political prisoners, created the Presidential Committee on Human Rights, and appointed some human-rights lawyers to positions in government. 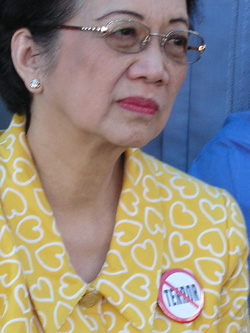 Cory Aquino, during an anti-terrorism rally in Davao City in 2003. (Photo by Carlos H. Conde / bulatlat.com)

However, owing to her background, she fell short of implementing substantial reforms. She signed the Comprehensive Agrarian Reform Law, but the law had to be extended for more than two decades without being completed. The mill and farm workers of the Cojuangco-owned Hacienda Luisita had to fight for the land they have tilled for generations for two decades, paying for it with their blood before being able to gain it. She refused to renegotiate even the onerous foreign debts of the Marcos dictatorship, passing the Automatic Appropriation Law instead. And the Aquino government pursued the same economic policies that have wreaked havoc on the lives of the Filipino masses.

Aquino also implemented the same militarist solution to the armed conflict by “unsheathing the sword of war,” displacing more than a million people in rural areas. The “low intensity conflict” strategy that the Armed Forces of the Philippines (AFP) learned from the US Armed Forces and was implemented by the Aquino government included arming anti-communist vigilante groups, which was responsible for brutal attacks against the people in rural areas. Enforced disappearances and extrajudicial killings were also committed although the number of victims pales in comparison to that of the present Arroyo government.

Nevertheless, Cory Aquino, who died today, Aug. 1, has secured her place in history for daring to challenge the hated Marcos dictatorship and becoming the first woman president of the Philippines. More importantly, she presided over the dismantling of martial law and the restoration of the Filipino people’s formal democratic rights and processes.

Cory is much unlike the second woman to become president, Gloria Macapagal-Arroyo, who is emulating Marcos by attempting to become a dictator and trying to outdo Marcos in corruption and human-rights violations. Seeing this, Cory Aquino had to rise again to the occasion and ask Arroyo to resign. She became one of the guiding forces of the movement to oust Arroyo. Cory fought tyranny to the very end. (Bulatlat.com)