You Are Here: Home → 2009 → August → 25 → Under the Gun: School Helps Build Lumad Communities — to Military’s Consternation

A significant impact of an Alcadev education is that it “bridges the knowledge between students and parents.” It thus helps the development of Lumad communities. But the military is suspicious, branding the school and what it does as communist, harassing not just the teachers and students but its foreign supporters and visitors as well.

(First part: Under the Gun: School for Tribal Children in Surigao Bears Brunt of Militarization)

LIANGA, Surigao del Sur — Farming is part of the curriculum of Alcadev (Alternative Learning Center for Agriculture and Livelihood Development), a non-formal school based in this town train students to gain academic, vocational and technical skills. Alcadev teaches the equivalent of a high-school education.

A significant impact of an Alcadev education is that, according to Marife Magbanua, the school’s program director, the school “bridges the knowledge between students and parents.”

“Whatever the students learn and practice in school, they practice these at home,” Magbanua said in an interview. At the same time, the curriculum is culture-sensitive and is designed for indigenous peoples, such as the Manobos in this province.

Magbanua cited the story of a student who wanted to teach mulching, or the process of enriching the soil by covering it with rotting leaves to serve as organic fertilizer. “The student was exasperated because his father didn’t believe him,” she said. “He was used to just burning the dried leaves. So the student made his own plot. Three months later, he harvested better crops and his father was convinced.” 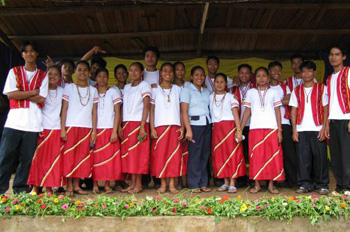 The graduates of Alcadev. (Photo courtesy of Mapasu-Alcadev / bulatlat.com)

It is this education that is being threatened by the recent militarization in this town. The military views Alcadev as an “communist school.” The incursion of soldiers had resulted in massive evacuations the past weeks.

From the School to the Communities

To bridge the knowledge of the students and parents, Alcadev teachers hold trainings in sustainable farming and health for parents.

There is normally a clash between the student’s acquired scientific knowledge and the parents’ traditions and beliefs but it is a gradual process of learning and uniting, Magbanua said. The end result is that the educated Lumad youth become more productive members of the community, contributing to its development.

By their fourth year, students are given options for their specialization: in agriculture, health or community teaching. Everybody is given basic skills in these three areas, but students who have particular interests are given further trainings.

Magbanua said that the school’s health program was able to lower the cases of diseases in the communities, through their education in sanitation, and health and science. Students acquire higher health standards in school, and when they come home to the communities, their health practices influence their parents.

Young and educated, Alcadev students also gain confidence. Magbanua narrated how a Han-ayan resident once had an accident while fishing, and caught his wrist in a fishing hook. An Alcadev staff could not remove the hook for fear of damaging the veins; he suggested bringing the patient to the town proper. But Robert (not his real name), a 19-year-old Manobo student, offered with certainty: “Ma’am, I can do it.” Then he proceeded to remove the hook. Magbanua and the others were impressed.

Magbanua proudly said that three batches of Alcadev graduates now serve as community development workers with skills in agriculture and health. Several graduates who specialized in community education are now teaching classes up to Level 3 in TRIFPSS (Tribal Filipino Program of Surigao del Sur), another nonformal and nongovernment school that offers the equivalent of a public elementary school.

Aside from practical skills, there are also lessons in creative writing, visual arts and music so that students can express themselves.